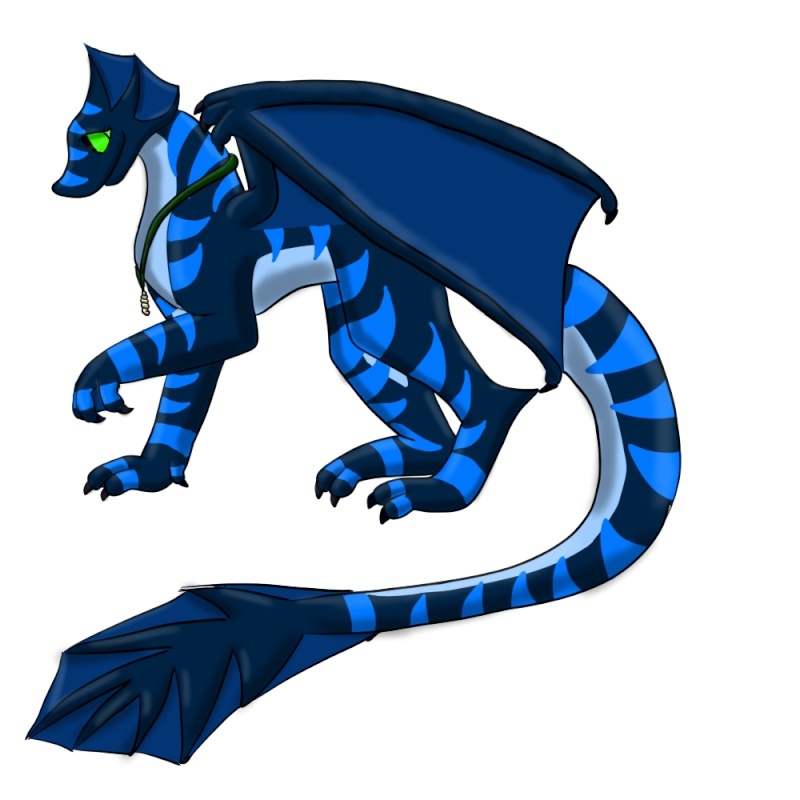 Personal Info
Name: Shiningwater
Nickname: Shine
Age: 240 Dragon years
Gender: Female
Personality: Shine is very friendly and caring. Most of the time. Since the dissappearence of her mate, Korramyr, she's been having violent mood swings, though she does remain caring no matter her mood. While much of her time is the friendly and outgoing leader, the other half is very snippy and her temper easily flares, though the chances of her physically harming someone in a temper flare is less than zero. Despite this, she is still very friendly and forgiving to all, even from other tribes. Being a Seawing, they have no real enemies, though slightly hostile towards Firewings, she is kind to all, including Firewings. She is always there to help a friend in need, and it is incredibly rare for her to turn a favor down for anyone; Seawing or otherwise. As a past time, she tends to her herb garden in the palace, having an above and below water one. Both times she is often assisted by her pet Catfish, Corry, who she keeps with her at nearly all times. If the reference isn't obvious, there's not much I can help you with.
Interests: Corry, hanging out with her friends, cake, attending to her hidden herb garden, cake, making new friends, and did I mention cake?
Dislikes: Her sister, other people truly insulting her friends, the nickname "Shiney"
Fears: Loosing her close friends.

General Appearance
Height: Smaller than the average Seawing, but not too small.
Scales: Dark blue for most of her body, lighter blue stripes, and a very light blue underbelly
Eyes: Brilliant Green
Appearance: Shine is dark blue for the most part, with sky blue stripes and a powdery blue underbelly. She has a fin on either side of her head, the one on the left has a tear in it from a previous encounter with her sister. Her tail is long and thin, and tipped with a large fin for powerful swimming. She has three toes on each webbed foot, as well as a thumb on both forefeet. She wears two necklaces, one a shell strung on kelp that she's had for as long as she can remember, and the other a small bag that she calls a 'pocket dimension' where she stores herbs (and cake). She also has a pet catfish, who's about the size of her head, large for a catfish. He is completely black, with the occasional shiny blue scattered around it's chest, more concentrated around the muzzle. He he also has a cat-like body, with a long, fish-like tail. Around his face he has two long whiskers on each side of his muzzle, and two much shorter ones from above each eyebrow. As far as ears go, they are rather large and move much the same as a real cat's.

Skills and Abilities
Strengths: She is an incredible swimmer-one of the fastest Seawings by far, she knows every herb you can think of and it's uses, she can read emotions well and can tell most feelings by facial and body expressions and gestures.
Special Abilities: When in dire situations, she has a power that can heal any illness or injury, though it costs her greatly. Last time she used it, she fell unconscious and lost her memory.
Weaknesses: She's clumsy on land, but getting better, and her small wings mean that she can't fly for very long, high, or well.
Combat Style: She prefers to have a strategy and plan to follow, and then goes right in. If it works, it works. If it doesn't, improvise and try to stay alive and protect your friends.

Background
History: She has fragments of memory of her childhood, and most of what she knows came from her Sister, Dusk. She was born after her sister, and began to inadvertently hog the spotlight. There was later an attack on the Seawing tribe she lived in (not the current one) and her parents could only save one of their children. And they chose Shine. She was later found by the current Seawing tribe, along with the shell necklace, and was raised there, where she has the remainder of her memories.
RP Sample: ((Shine's past, what she doesn't remember.)) The small blue dragoness whimpered against her mother's leg as enemies rushed past, a her red-striped sister pressed against her. Two pairs of identical wide green eyes stared around. The pale blue larger dragoness pushed her two hatchlings forward, violet eyes worried. "Hurry. While they are distracted by the soldiers." Behind them, a black male's blue eyes were narrowed and a snarl. He nudged his mate. "Go. I'll buy time." The female looked at him. She began to argue, when he cut her off, saying he'd be fine. The female nodded an gave her mate one last nuzzle before he raced off with a snarl. "Where's dad going?" A small voice came from the blue hatchling. Her mother ignored her, rushing forward. Two of the invaders rushed forward, a feral snarl on it's face. The mother's face showed anguish, and she pulled a necklace from around her neck, shoving it into the female's paws. the two pounced. The hatchling let out a terrified scream as her mother shoved her forward, and she and the black hatchling disappeared under the pile of invaders. She whimpered, clutching the necklace closer. She had her small wings opened, and the current carried her slowly away from the raging battle.
_______________________