Personal Info
Name: Erinyes
Nickname: Erin, the Fire Fury, or the troublebringer
Age: young, like a teenager
Gender: Female
Personality: She is very impulsive and do not have a good selfcontrol, she was (and still is deep inside) very shy but because of this many others dragons attacked her, so she grew up angry and act in a defensive way because of that, to protect herself, she can be very aggressive, and even if she is facuing someone bigger or stronger, she realese her fury, if she is scared she try to never show it, and because of how she was treatened in her past, she want to bring some justince in this world...and try to survive, well...not using always the "correct" way because of her behavior, but she is very vulnerable inside and also can be very kind, expecially with who is vulnerable from her point of view, so her actitude is a kind of "revenge" and a try to find a way out from this situation, the cage for her is her own mind. she is also know as a dragon who can give troubles, because she can easily attack another dragon, and other times solves the situation but have not much retribution.
Interests: she like to fly, to hunt, like almost every other dragon, she like to breathe fire while flying and pass trough it, challenging herself and her fears, she like good company, of humil and modest people, with a good and loyal heart, be with these kind of person make her feel a little unconfortable because she don't feel like she deserve their company, but it also heals a little her wounds. also when she faces someone rude, or more like her, it's like she react against the other because she don't forgive herself even if she have no fault, or in some rare case che can give a try, open herself , and find out that with this kind of dragons they can eventually understand each other
Dislikes: bully, in first place, that hurts others with no reason, who feel pleasure injuring someone with words or fangs and claws, falsity, arrogance, and what is unfair from her point of view, like the rule that the bigger win on the weaker.. for her it doesn't work always like this and it should not.
Fears: To be alone, to suffer again, to be attacked, chased, persecuted or refused, to be the object to someone, to see others innocents suffer, her nightmares, that never left her
General Appearance
Height: she is quite tiny, and lean
Scales: fire-red, like the scales are burning from the inside of her body, and some golden scales on other parts of her body, that bright at the light
Eyes: yellow-green and can capture and disguide you, she can give a very angry look
Appearance: She is a little-medium size dragon, not too tiny but not the bigger one, she look delicate but well structured, robust despite the size, it appears as thin, and this makes it agile, along with its size and nature, the scales are bright red, as if the fire inside the dragoness maintained the lively, warm, in some places they are golden, shining a lot in the light of the sun, and has a pair of backward-pointing horns ivory / gold, as well as its claws, decidedly sharp.

Tribe Information and Status
Tribe: Firewings
Rank: Tracker (?)
Family: "I don't want to talk about that"
Mate: "it's better to have none" (even if she would like it)
Hatchlings: no, not yet! I'm too young to think about this!

Skills and Abilities
Strengths: She can free her fury, and so with it an innatural surprising strenght helps her to beat the enemy, also her fire breath can be dangerous if she is in "fury mode", but even if she can be easily angry, it must be a very bad situation to make her be so furious, for anger or because she can be scared, mentally she is quite vulnerable, as her body is not indescrutible
Special Abilities: can breath piece or magma and lava against the enemy, or surround herself with fire, also make her body temperature grow
Weaknesses: as I said above, her mind, if someone use the "right" words can make her feel very angry or wounded, she don't care too much abouth her injuries until the end of the battle or if she is exausted, and this do not help her to recover well of fast
Combat Style: she is very impulsive and can turn back at you and bite in a second, so she usually throw herself gainst the enemy, but if she see that's not effective she fly away and try to attack it with fire and magma or to create a diversion, doing a surprising attack
Background
History: I said something above, not a very good relation with others, just few friends, which some of them betrayed her, parents that looked like they don't understand her, acting bad with her, in the wrong way, even if expecially the father is worried, she was a rougue for a while too, but didn't left the tribe at all, still loyal at it
RP Sample: (I'll update this sooner as possible) 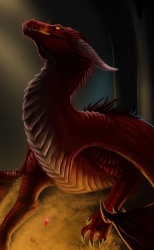 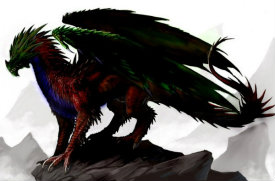 ahahah ^^ thank you very much Avian!!