Top posting users this month
Who is online?
In total there are 12 users online :: 0 Registered, 0 Hidden and 12 Guests :: 2 Bots

It was a dim and stormy day, and small streams of water erratically poured from the cracks in the ceiling of the old Earthwing Tribal Home. The large cavern had fallen into disrepair as all of its inhabitants moved out to live in the new Earthwing Palace in The Hidden Kingdom.

All but one, of course.

Behind a thin wall of collapsed rubble, the sole remaining occupant of the dilapidated cavern slumbered deeply, there was a large basin filled with glowing green acid. Rhythmically, small jets of the viscous green substance would shoot up from its edge, in time with the breathing of the occupant, a large dragon colored like a Nightwing but with the size of an Earthwing, a product of mixed blood.

All this time, Corrode had slept, completely unaware of the changes that had gone on around him, ever since he had gone into hibernation while the Tribes still existed.

Corrode started to grow uncomfortable as more and more dragons appeared to join the conversation. All these new dragons was a tad too much for the old Lieutenant to take in at once, and he shifted on his feet a little, eyes darting from one dragon to the other.

Subconsciously, he shifted a bit closer to Gemini, since she was the only stone he could hold on to in this tide of the unknown.

When he heard his name called by a new voice, his head snapped to that direction, his eyes locking onto the dragon that had uttered it. He looked vaguely familiar, but Corrode couldn't place it.

He didn't say anything, but Corrode looked more and more stressed by the second. His breathing was quick, and his tail still.

// VenomTail is staying on a high rock where the other dragons can't reach him. //

VenomTail trembled when he noticed another giant EarthWing arriving. Now Venom was a bit scared with all those dragons around and there was probably no way to escape from the cave if things would get worse. The giant dragons were almost obstructing the entrance. The bug dragon had some troubles with his fellow mates because they can't see the small dragon at all. So Venom was constantly living with the concern that someone would step on him one day. Venom was indeed always in the air, moving stealthy between branches. You would rarely see the bug dragon walking on the ground. The bug dragon gave an alarmed look at Corrode. The acid creature looked to be slightly irritated and it seemed there was a bit of tension in the air. 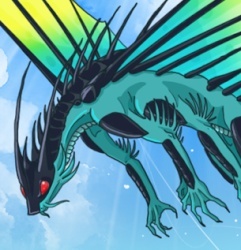 Gemini gazed around the other dragons, as more kept filing in. She felt Corrode shift a bit, and sighed. "Alright everybody! Get out of the cave! We need to give Corrode some space. It's been a long time since he's seen any other dragons, so it'll take a while for him to get used to you." She turned to the acid dragon. "How about you go back to the EarthWing kingdom a bit later? I can accompany you. I'm sure many dragons will recognize you. And I'm sure that Cosmos will welcome you back into the tribe with open claws."
_______________________

Korramyr shrugged as he stood aside to watch the others speak. He knew little of this Corrode by his own right, so he figured it would be best to say nothing until things were cleared up for him if nobody else. Hearing Gemini's recommendation to leave, he turned and began to head out of the cave, looking up at Avensu curiously. Yet another dragon he did not know of. Must be getting old, he figured, taking a seat outside the cave without a word as he waited for Gemini and Corrode to hopefully come out from the cave.
_______________________
"The world is but a stage, so why don't we make it a dance floor? And if we can't dance? At least we had fun building it."
- Korramyr, on the topic of dancing and stuff.

Corrode was still glancing around when Gemini asked everyone to give him some space and leave the cave. All for the better, since the large veteran was starting to feel claustrophobic.

He turned to Gemini again, a relieved look on his face despite the stress his tensed body and darting eyes were giving off. "Thank you, Gemini. For the second time in my life, I was beginning to panic. I just...it's so hard to believe that everything's...gone." He said, half-leaning onto Gemini for support. His legs felt weak.