Permission for use Granted by my friend Shadowsaber ^^
Personal Info
Name: (Amar'a'Tiel)
Nickname: (Zeal)
Age: (Dragon year's 2105)
Gender: (Male)
Personality: (A dragon that likes to keep to himself only socializing when it benefit's him and not bothering to trouble himself over matter's that will cause more trouble then good although his appearance is one of holy he is definitely not as he is stubborn and enjoys mocking other dragons to get reactions from them without worrying of the consequences

when bored he often takes the time to contemplate the history of all origin as well as trying to find objects of great power to imbue himself with he is more or less a perfectionist and does not like other dragons that tend to be ugly personality wise. to sum him up he is stubborn intelligent wise to a degree taunting violent went necessary caring to potential friends that have gotten close to him. he also often welcomes guests that have information worth hearing.)
Interests: (Artifacts,Space and all it offers,Power,Beautiful things,Fighting worthy opponents,Respectful Dragons,Watching drama unfold and having nothing to do with it,war
Dislikes: (Ugly things,To much prosperity,Love dovey things,self righteous fools,obnoxious dragons,Goblins & orcs,)
Fears: (Black holes,Super Novas,picking a fight he cannot win,Being wrong,falling for a trap,someone more intelligent,finding another like himself)

Height: (60 feet tall when Up straight the usual appearance he gives is 40 feet tall only showing 60 feet )
Scales: White feather like scales composed of a hard material gained by the dragon devouring Precious Metal's such as Orichalcum & Soularium-(A special metal imbued with souls) & gold & diamonds and imbuing his body with the hardness of the metal's as well as his own energy. although the feather scales are more flexibility then they appear to allow him more agility when needed he prides himself on speed
Eyes: (his 2 small eyes are amethyst the 2 larger Sensory eyes which he rarely uses unless in battle are byzantine)
Appearance: (a dragon that appear's to be of holy origin even further proving this is are the 2 holy shields decorated upon his sides one might think him a dragon of heaven but they would be wrong. adoring around his body are crystal likes spheres that appear like eyes of demonic origin and they would be close to the truth if they suggest.

the holy shields were augmented by focusing the minerals of the metals he devours to the parts of his body and then having dwarven black smith's work on them as painful as it was. the human version of a tattooed jewelry that gives a defensive advantage.

the large obelisk like horn on his head is his pride and joy it is also his most powerful weapon  a point on his body that signifies his stance. the prideful feather like scales that shed when they become rusted from the wear and tear are redouvered by him to recycle the metal's . his claws are made from crystal's that his body has developed over time that are as capable if not harder then diamonds.

Tribe: (N/A)
Tribe: (N/A)
Rank: (although not having a rank given upon him he is a self proclaimed "Star Seeker" one that aims to traverse the universe for all its beauty)
Family: (N/A)
Mate: (N/A)
Hatchlings: (N/A)

Skills and Abilities
Strengths: ( when past the Thermosphere he is imbued with cosmic energy that makes him more powerful,Penetrating ability's,Speed,Energy,Defence,serpent like grip,Energy based magic)
Special Abilities: (Spinning his body at a high speed and thrusting himself toward his opponent while focusing energy around his horn he is able to penetrate even the hardest of defences doing so leaves a burning like aura on the flesh of his opponent if pierced that instills pain.

the sphere on his tail is used as a screeching  whip when he whip's it, it let's a screech that emits a super sonic shockwave that can stun opponent's.  focusing energy on it increases its efectiveness.

when his wing's are spread the eye like patern's begin to glow causing an illusion toward's the opponent almost like a peacock that know's how to mesmerize.

for every hit he does or takes one of the large spheres on his body/wings glow when all glow he is able to convert the energy obtained from those hits done and taken(not he still takes damage from those hits there not healed) into a powerful single attack.

his favoured  ability is when he is able to use the sphere on his tail as a sort of conduit to emit a miniature gravity well to increase gravity to a degree on his opponents or misdirect projectiles)
Weaknesses: (Energy,poison,things that slow him down,lava based attacks,cursed attacks)
Combat Style: (He adjusts to suit the need for a battle one battle he could be running circles around his opponent while attacking and fleeing. another if the opponent is of the same speed could be  a confrontation)

Background
History: (Hatching alone in the mines of an arcane ore facility long abandoned he does not know of his origin's only that his egg was in a crystal that had been cracked open during an earth quake. he grew up devouring the arcane rich ore and the creatures that entered his domain after maturing he took interest in human culture and ancient history aswell as power and the beauty of the stars. always gazing up hoping to go further every night managing to fly past the Thermosphere he realised he became more powerful when in space which to him was an invitation of belonging somewhere. allthough he is unable to traverse far due to hunger and the temperature over time aswell as the constant pressure he hopes to overcome these in the later future)
RP Sample: (*Zeal was in a deep slumber in his lair located on top of the mountain range where his birth place was. in a cave that he had eaten away to enlargen to fit his length body aswell as food for him to devour he often had tributes from the local human village's consisting of metal's and organic food which he detested as it gave him bad breath and he didnt like having to find something to pick his teeth with. his smaller amethyst eye's had rolled open as he yawned with a thundering crackle echoing around the mountain cave almost as if it split open. he began to slither and stand his height of 40 feet tall before condensing to slip out of the entrance and look around. he had hoped to find something interesting to do today and had also hoped to see some interesting quarrel's between dragons* )


(Note: i apologise for my grammar Q_Q Im not the best with it)) 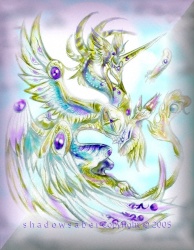