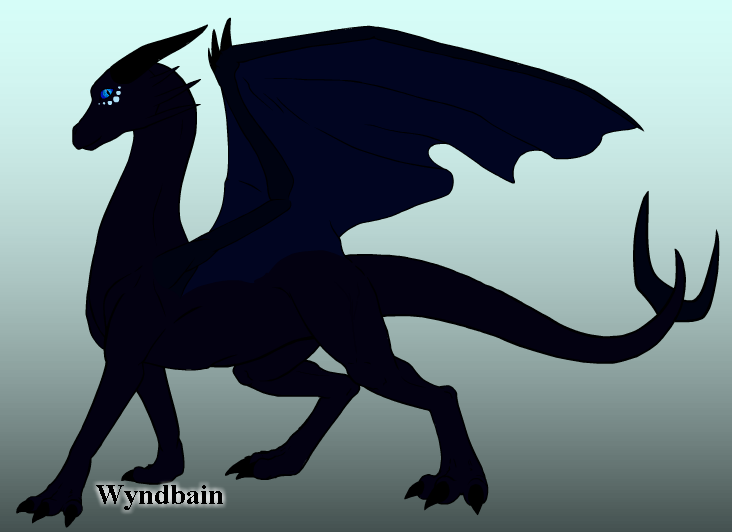 Personal Info
Name: Moonshade
Nickname: Moon
Age: 20/Young adult
Gender: Female
Appearance: She's a rather small Nightwing, a few paw-lengths shorter than everyone else. Moon is a very dark blue, making her appear black. She has two tall, straight, dark horns on her head, along with three spines on each cheek. The horns are black, and her spines are the same color as her body. Her wings are rater large, with a dark blue membrane and three black claws at the top. Her tail is tipped with two spines that jut out on either side. The only marking he has is a line of 6 white dots that circle the lower half of her bright blue eyes.


Personality: Moon has to fight hard to keep her personality in check, as being able to control the shadows sometimes gets out of hand for her. Because of this, she rarely speaks out and always keeps her voice low. She may look small, timid, and generally like a pushover, but it's to keep those she loves and cares about safe. When she can't control it, she becomes one of the most vicious dragons you may ever meet. She will attack you head on without thinking, and won't stop until it's over or until she gets herself back under control. She is able to use her powers without losing it easily, but too much of anything could potentially throw her over the edge.


Skills and Abilities
Strengths: Her size and color. She can easily sneak around because of this, as well as her build. She is lithe and thin, making her the perfect spy.


Special Abilities: She can completely control Shadows. She is able to take a shadow from where it lies and form it into something physical, or use the shadow to attack another's shadow, there by hurting them as well. She cannot create them, however, nor destroy them.
Like all Nightwings, she can read minds, but it is weak in comparison to her ability to blend into the shadows.


Weaknesses: Her size. She is very small, and relies on her powers to do damage. Stick her somewhere without Shadows, she's completely helpless. The alter ego. When things get to rough or more than normal of anything comes her way, she loses it and becomes vicious and reckless, in this state, it is harder to hurt her, but she wouldn't care if you did, so she'll just keep attacking.


Combat Style: Normally, it's think it through and plan carefully. When she looses it, it's attack first, ask questions later.

History: Moon was born into a Nightwing family who lived a small ways away from the tribe, along with a younger sister and an older brother. She had a normal life, and her parents taught her everything they knew on how to survive. Then she discovered her Shadow abilities. She could control them easily when she was young, and she didn't have the alter ego to worry about. Then, the humans came. The family knew that humans had been capturing and enslaving dragons, but they thought for sure they wouldn't come here. They did. The humans came in huge cars, her parents fought bravely to defend themselves and the three hatchlings, but ended up getting killed when the humans couldn't capture them.
The three young dragons were taken to an enslavement camp with countless other dragons there. They stayed there for a long period of their life, and Moon's brother, Starlight, died of starvation. Her younger sister, Moonlight, died when Moon was trying to defend herself and her younger sister when the humans decided they were too scrawny to work any longer. Moon only managed to survive because of her abilities. Somehow, she was surviving off of the shadows.
During this time, she also discovered that not keeping her emotions in check would lead to her becoming incredibly violent and reckless. Unfortunately, testing it out on a human by accident doesn't help you much in the way of survival. Once again, her shadows kept her alive.
Many years later, the Nightwing tribe freed the enslaved dragons, and took interest in Shade. They took her in, fed her, cared for her, and taught her about the tribes. She discovered that her abilities could be useful, and that she could control them, during her time with the Nightwings.


RP Sample: Moon shuddered in the small cage, the humans were still trying to get at her younger sister. She snarled as one took a step closer. Moonlight lay shaking under her, staring up at her older sister with wide green eyes. They already took Starlight, they're not taking Moonlight too. She growled as one of the humans hefted a staff at the two Nightwings. She lunged forward, snapping the staff in two. The human whimpered, scurrying backwards in an attempt to escape from the angry Nightwing. A squeal sounded from behind her and Moon stiffened. Her little sister lay at the foot of a human, unmoving. "No!" Moon gasped, tears forming in her eyes. "How could you!?" She yelled, leaping at the human. A spear came crashing through the membrane on her wing, and she whipped around, staring at the human who did it. Her eyes narrowed in hatred, and she lunged at the human, her eyes turning crimson. She could only see red, but she could hear the terrified screams. She grinned. This is what you get for hurting them. I warned you.

Is it ok if you change your name? We can't have to Shades

Goodness me, another Nightwing.

Yea, sure. Sorry Phantom. Everyone was doing it on the same account, so I did it on the same one too. But sure! Want me to do it now? I could call the new account MoonShade instead of Shade if you want me to. And her nickname is now Moon instead.

Hello! Made it Phantom.

Woot! Now I need a badge and name color. 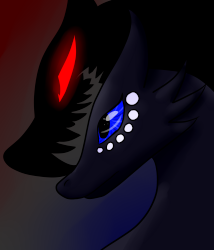