Latest topics
» Something to Care About
by Súl Iolar Today at 11:31 am 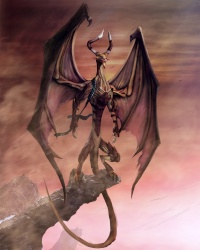 Personal Info
Name: Hello, reader, my name is Sorin Markov,
Nickname: but some just call me "The Immortal One", at least at my home plane.
Age: Sadly for you, no one except myself knows my age. But I lived for several millenia, having seen most places of the Multiverse.
Gender: Male
Appearance: I took on the shape of a dragon since my arrival on this plane. I assume it is because the dominant species, maybe even the only species in this plane is the dragon race. They called me a "Nightwing", so that means there exist different tribes, too. It took me a while to find a place where I could see my own reflection. But it seems like mywhole body changed drastically. I grew 3 pairs of horns on my head, while one pair is bigger in size as the others and placed on top of my head. I grew wings as well, black wings to be precise. As I stretched them, I could see that they are of an incredible size. My skin was replaced with scales, grey-silver on the underside of my body and jet-black elsewhere. I got all the features of the dragons in our part of the Multiverse, namely a quadrupedal stance, talons at my feet, a spiny tail as well as spines on my back.
Personality: Most people wouldn't think of it, but I have a fundamentally hedonistic nature, which developed out of the time I'm living tin the Multiverse up to now. I dedicated my existence to following my whims and this easy life of pleasure has brought me detachment and easy confidence. But despite this nature of mine, I feel the pull of more lasting concerns known only to me. As a result, I became a very busy man over time who always seems to have business elsewhere.

Tribe: They called me a "Nightwing". So I suppose that it is some kind of tribe. They welcomed me into that tribe and for me it is not anything bad since I need to survive in this plane for as long as possible.
Rank: I explained them everything of me they needed to know. They told me after that they couldn't place me in any specific rank.
Family: In this world, I obviously do not have any family. In my home world of Innistrad I had a father, Edgar Markov, who deceased a long time ago.
Mate: I do not have any mate and, to be honest, I'm not the kind of person to have a mate since they'll eventually die of old age while I continue to live.
Hatchlings: Because of that, I do not plan to have any hatchlings.

Strengths: To be honest, although I tokk on the shape of a dragon, I do not fight with such ferocity. I will not say that I'm bad at direct combat but I prefer the indirect combat, like a battle of wits, a fight of the intellect. I try to wear them out in a fight, striking them once or twice a time with my special abilities until they collapse to the ground.
Special Abilities: For this, you have to understand the mechanics of the Multiverse. Every living being inherits an essence called "mana". We distinguish between six colors of mana: blue, white, green, red, black and colorless. I inherit black mana, which represents death, pestillence torment. I am a master of a special art of black magic, called sangromancy, that allows me to manipulate blood. But you should not imagine it like I would bend the blood of others inside their body. Sangromancy is the magic to give and take the lifeforce of other beings. I can strike them with this black magic, that will cause them to lose a portion of their own lifeforce, which will heal minor wounds of mine. I can also cast curses upon my enemies. I have a huge variety of curses. I can make them lose their lifeforce over time, lose parts of their memory or even increase the effectiveness of my spells against them. In rare events I'll bend their mind, sometimes even crush it altogether. I can invade their most vulnerable weak spot and control them over a short duration, giving me enough time to think of a way to dispose them. I recently learned that, because I'm a Nightwing, I can blend in with the night sky, making me almost invisible in the dark and being able to breathe a dark matter that sends oppnents to sleep for a certain amount of time. In combination with that technique, I can use the limits of sangromancy to nightmares upon my victims. Although this is just a hypothesis since I never actually tested it out on somedragon.
Weaknesses: Now, that may sound like I'm invulnerable, like I am some kind of god who cannot be defeated. I learned all these techniques in these millenia of lifespan that I've lived through up to today. But since nothing in any world is perfect, I have weaknesses as well. I am not the kind of head on fighter, not to mention a brawler. If someone manages to get into close combat with me, I'll have a rough time dealing with them despite my huge size. As I draw my powers from magic, fuled by the essence of mana, I'll get exhausted over the time, although I drain the lifeforce out of my enemies. If I use my knowledge on controlling somedragons mind, it'll leave me vulnerable as I'm not in my own body at that time. And by the time I leave into my own body, I won't gather enough mana to continue the fight for much longer since that kind of magic is very expensive.
Combat Style: My combat style, as mentioned several times before, isn't a physical, but more of a magical and mental fight. I try to dodge most of the physical attacks as well as shield off any attacks like fire breaths with a shield made of mana. I try to draw the fight out leading in my opponent collapsing in front of me while I am at my full strengh. If I catch an opponent who tries to rush our fight, I'll do it too, but on my own way.

History: I mentioned it before but I can explain it here in more detail. I am not a dragon from birth on. I came from a different plane in the Multiverse called Innistrad. That world inhabits creatures I suppose you wouldn't see here: Humans, Lycans, Vampires and spectral beings as well as Demons and Angels. I myself am a vampire, a very strong one who ascended to a being called a "Planeswalker". These beings could destroy whole planes with a snap of their fingers, not figuratively but almost. As I saw my own kind almost forcing the humans into extinction, I commited the ultimate act of treason: I created a being to protect the humans, an angel I called "Avacyn". She would fight with her army of other angels and humans as well as spirits against the vampires and the lycans to ensure their existence on this very plane. After that, I left Innistrad to follow some...other concerns. However during that "planeswalking" as we call it, the technique to travel through several planes within minutes, I must have gotten into a time or spacial rift that changed my direction and brought me into this foreign world, unknown to us up to now. Of course I have a curious nature but I reallized soon that I lost my abilities as a Planeswalker, namely the planeswalking. So, in order to return it, I decided to stay in this world to learn it's nature. While doing this, I'm also learning about the inhabitants of said world, who all seem to be dragonkin.

I really like the style you wrote this bio in, NightRaven. It's like nothing we've seen yet on the Forums. For everyone else's sake, can I personally ask you write in third person when roleplaying as opposed to first person? Aside from that, I really like your character and I hope to see it soon.

Wow. This is awesome , NightRaven. I can honestly say this is the best bio i have ever read on this sight. Great character.

Sapira as a pony: 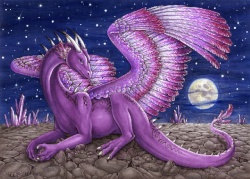