Gold and Silver (Open to All)

Gold and Silver (Open to All)

Krarrvek touched down beside a stagnant pool, a remnant of last night's storm. He bent his neck, lowering his head down to the water. It was warm but it would serve its purpose. Sunlight glinted off the ripples created by Krarrvek's lapping tongue. The pupil of his left eye narrowed, his sight honing on a bush 20 yards away, whose leaves rustles despite the lack of wind. A rabbit leapt from within a few moments later. Krarrvek raised his head, droplets of water rolling off his muzzle and from within his slightly agape maw. For a moment, the serpentine dragon considered granting the rabbit the high honor of becoming his lunch... but deemed it unworthy of even being a snack. Krarrvek looked to the west, the direction from whence he had come. To the east was a human settlement. The stench of the small bipeds were as thick as dragonhide. And speaking of dragonhide... Krarrvek twisted himself about, nipping at the underside of his right haunch. The golden armor he wore--commissioned by some human noble as an offering--clinked softly and rubbed against his scales. The armor was completely unnecessary--never had there been a dragon who needed armor, let alone something crafted by an inferior species--but it accented Krarrvek so nicely that he didn't mind wearing it.

Back in the sky, Krarrvek continued eastward, toward the human settlement called Brysur. At its highest peak and intensity, the sun caused him to look like a bolt of fire. A group of humans below who happened to look at the sky wondered if another flaming rock was to land nearby. Krarrvek had more important things to worry about. His eyes kept watch for monsters and other dragons. The former were a nuisance and relatively dangerous. They tasted terrible as well, but at least they had a taste to them; Krarrvek found dinosaurs to be terribly bland, though perhaps he simply tired of the same food. As for other dragons, well, Krarrvek couldn't stand them.

When the sea came into his sights, Krarrvek dropped from the sky, twisting and writhing like a constrictor fighting to restrain its prey. He stopped above the rolling waves of the sea, gliding over the water, his flight now mimicking a swimming sea snake. He had yet to see any monsters that dwelled in water, but he knew the SeaWings called the ocean home. As he flew toward the human city, he stared down into the depths as far as his eyes could, uninterested in being blindsided by one of those water drakes. 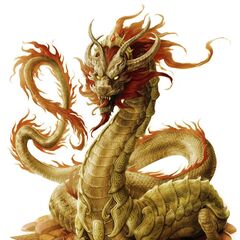 Re: Gold and Silver (Open to All)

In the likely event that one should find themselves lost in a world of chaos, they may stumble upon knowledge and wisdom where there may not be any. Research and science are subjects that many dragons do not partake in, perhaps in the world's histories of the variety of draconic tribes, kingdoms and factions are recorded but very few often try to learn the effects of flora and the anatomies of fauna. Ever since the downfall of the dracis kingdoms a wealth of knowledge within the territories were lost, but suddenly the eccentrics who remained had a new purpose: the beasts of another world. Where years of studies of dragons had faded came the bestiaries from recent days, many individuals have delved themselves into endless studies and experiments upon the creatures which now inhabit the world.

One such individual was the advisor of Baldirak Draco Sapiens, Ragnarok the Great Ram. Today was a day of simple collecting and observing of Humans, from a distance he could see what they do, what their everyday lives entailed without the "existence" of dragons. So they foolishly thought the dragons were gone. He soared high in the sky just beneath the sparse clouds, observing Human vessels and settlements as he passed over them. There were a great many who still believed in dragons, and individuals like him were the ones who instilled that belief. Ever since he had finished the construction of his personalized island, a home he now calls the Old Mantel for the ancient ore and caverns found beneath the island, Ragnarok was always out gathering and doing things other than putting the finishing touches on this island haven he desired for dragons.

From his eagle eyed vision the great earthen drake spotted a whale, small in size but it was a mature one nonetheless. Good, I was getting a tad hungry, thought Ragnarok as he descended further until reaching the water's surface. There he could see the majestic beast start to emerge but yet to break the surface, his claws were ready to snatch it up until something else caught his eye. A bolt of fire? No, something serpentine heading directly his way. In a sharp grunt the massive dragon moved upward and immediately turned vertically to narrowly avoid the other drake that was zipping on by.

But what intrigued the Ram was that this dragon had armor, something that was unorthodox amongst the dragons. A frail one maybe? Perhaps they too are eccentric for odd things in this world? Ragnarok eventually turned his body with the wind and straightened back around to follow the dragon that was faster than he. He had several questions now, while Ragnarok's own apparel seemed like it was Human make it wasn't. Its design was far more ancient than some dingy plate metal, the massive hammer-like infused ore decorated in carvings implanted into his skull was an example of this. His own "armor" served its purpose however, decorating the dragon as an esteemed member of the Earthwings, the Imperium, and for protection against magics as it was originally designed to do. But now he was tracking down a dragon he was most likely curious about.