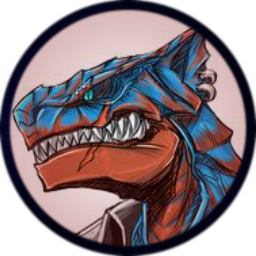 Personality: A spectrum between a fearful recluse to a feral raging belligerent . Easily angered, easily distracted, easily frightened. Occasionally eccentric with a touch of madness.

History: Rex found a life into slavery rather quickly after hatching. Becoming something of a prized trophy or a collector's pet. From adventurers, to wizards, to noblemen and now drow, the poor wretch has been traded, captured and sold many times over. For reasons as mundane as unique. Rex's scales gleam with a brilliant hue of red and blue. Many previous owners have pondered whether this unique trait was caused by a magical mishap or perhaps some strange alchemical mutation.

Unfortunately, Rex suffers from another condition. The poor thing lacks the smallest scrap of sanity. And is prone to explosive bouts of rage, becoming a living natural disaster. With the unnatural strength, agility and instinctual brutality to match. You'd think a small 2 feet lizard that hardly weighs 20 pounds is incapable of devastating almost half an entire village... You would be gravely mistaken. 16 cows, 14 sheep, 3 dozen chickens, and 8 villagers all dead within less than 2 hours. An entire arcane laboratory and half the mansion it resides up in flames in but a scant few minutes. A castle set ablaze, killing no less than a third of the garrison... in the middle of a monsoon storm at that. Accidently released in a fighting pit arena, slaughtering both champion contestants and all remaining arena beasts. These are but a few tales of the long list that entails Rex's madness induced bouts of carnage.

Some have pondered that it is likely due to the severe maltreatment Rex has received from previous owners for developing this uncontrollable desire to wreak havoc and sow destruction. Others argue it is an arcane malady from Rex's unique physique. Nevertheless, Rex is still a kobold and simple minded one. A few shiny baubles or a large glistening piece of meat mayhap subdue this little menace, or at least distract it long enough to escape.

It has been known that the feral visage Rex commonly adorns is merely that, a façade. Some have successfully been able to verbally communicate with this two foot tarrasque. Albeit, many not escaping without losing a limb or life. Even so, arguably one of the smallest kobolds you'd ever encounter. If one were to catch Rex during a time it has some sense of lucidity, it is surprisingly comical that this tiny devil can be frightened... reduced to the likes of a simpering goblin.

Rarely, Rex does show this softer shade of sanity. Like a crazed drug fiend coming to after a long euphoric trip. Displaying emotion, compassion and even some sense of self awareness. It is however, an easy task to dispel this mental state of Rex. Friend or owner should always take extra precaution when conversing with this kobold-beast. It is more monster than humanoid and prone to giving into that primal ferocity at the slightest provocation.