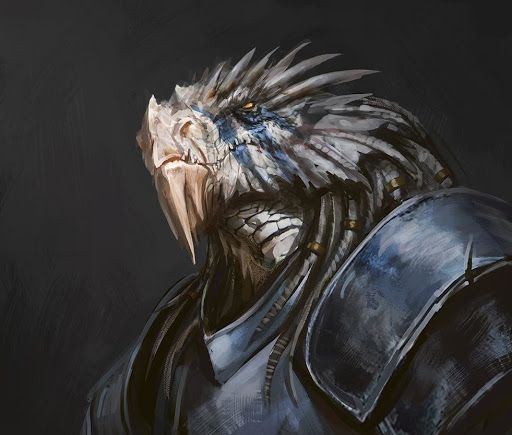 Appearance: Krarrvek's scales are the color of ash. His brows are adorned with protruding spikes of varying lengths that are longer behind the eye and tapper toward the snout. The sides of his head are framed by frills. His snout and chest are a very pale cream color. His claws are akin to birch trees; some are a darker grey while others are lighter. His eyes are yellow. Three streaks of blue warpaint made from wild berries stain the left side of his face. Krarrvek wears wolf pelt clothing.

Class: Druid (Circle of the Moon)
Equipment: One spear (the blade is made of bone), Herbalism kit, one Scimitar.

Personality: Krarrvek is most often described as "feral". Even when among other people, he can be indistinguishable from an animal in how he behaves. It is also immediately obvious that he isn't accustomed to speaking, at least not beyond a necessity of his own determination. Regardless of which language he is using, his speech begins with an unintentional growling, as if there's a delay between his frontal and temporal lobes. The growling stops abruptly after three words, however those three words tend to be very difficult to understand, especially if Krarrvek is speaking in Draconic, which he often does. His use of Common is primitive, but much easier to comprehend. If he doesn't switch to Draconic mid-sentence, he'll use gestures and hand signals to help get his point across. While Krarrvek's gestures are generally simple when paired with his speech, in situations where silence is key to success--or he's giving someone the silent treatment for eating the last piece of meat without asking him--they are surprisingly complex. For this reason, Krarrvek will teach anyone he intends to spend a significant amount of time with how to communicate with him in this way.

Krarrvek is more at home in the wilderness than any kind of settlement, however basic creature comforts aren't lost to him. The concept of coin is a bit of an obstacle, as he'll often try to trade whatever items he has. He has stolen coin from others simply because it's shiny and he didn't know any better. He seems to have an innate understanding of wildlife. As far as relationships with other people go, Krarrvek appears to have no obvious criteria. Most of his encounters are brief and one-time-only, therefore he is stoically neutral. This trend continues even with long term encounters, however after a certain amount of time, he will abruptly declare his companion(s) as someone he likes or dislikes. This declaration then dictates how he interacts with that particular individual for the remainder of his time in their company, and is usually permanent. However, the declaration has no impact on Krarrvek's willingness to ensure the safety of his companion(s), which encourages others to consider Krarrvek akin to a wolf or some other pack animal.

History: Born into the Prexijandilin Clan, Krarrvek was separated from it and his parents when he was young. He has no recollection of how this happened; either he was simply too young to remember or he suffered a head injury, which could also explain his speech impediment. He was found and watched over by an elderly Dragonborn Druid. Four years later, the Druid passed and Krarrvek was left alone again, this time for 18 years. At 25 years old, Krarrvek left the wild territory he'd inherited from the elderly Dragonborn in search of something he'd seen in a dream. He finds it difficult to explain why, but he's convinced the dream was given to him by a deity. Krarrvek wasn't only left with wilderness to watch over. The elderly Dragonborn also raised him as a Druid and left him his staff, which Krarrvek guards as if his life depended on it. Throughout his travels, Krarrvek has met other Druids who helped broaden his knowledge and refine the skills he already had.

At some point after parting ways with a  half-Elf he'd been travelling with for a month, Krarrvek was captured by Drow and imprisoned in the Underdark. 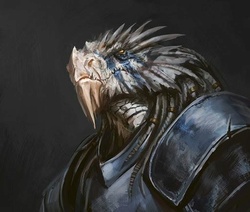