A Walk in the Darkness (Open to all)

A Walk in the Darkness (Open to all)

Tenebris walked as the vast invisible ocean of moonlight overhead seemed to fall only just upon him, here and there a slender broken steam of the moon's light seemed to clash against the intersecting branches and trickle to the earth, forming small white pools among the clumps of laurel. These leaks of light however were few and served only to accentuate the vast darkness of Tenebris’s environment as he continued to make his way through one of the many thick woods found within the realm of the Ebonwing Isles, he allowed his imagination to free his time as he thought of all the unfamiliar shapes within the darkness, both beautifully uncanny to menacing. The solitude and silence in the heart of the Isle's had the portentous conspiracy of the very night itself, those oblivious to the tranquillity of the night couldn’t comprehend how even the most commonplace or familiar objects take on another character in the Twilight.

Tenebris noted to himself how the trees grouped themselves differently, drawing closer to one another as if in fear. Even the silence now seemed to have a different quality than the quiet of the day. The air seemed to be full of half-heard whispers, notes of strange nocturnal birds which made the woods their home and the meeker cries of even small animals who Tenebris could only of assumed had fallen into a sudden encounter with a lurking predator, and even still there seemed to be sounds without a name, forms without a substance. The Archon relished in it all, the mystery and magic of the night was something only few appreciated, yet it was the very thing what made and defined him and his kin the Nightwings. His graceful figure finally reaching his destination within a small clearing at the end of the vast expanse as his musings came to a halt.

Extending his wingspan, Tenebris found pleasure as the Moon’s full gaze was cast upon him, its silver rays seemingly paying him tribute to his form. The unique reflective speckled effect of silver upon his wing membrane seemed to imitate the stars of the night sky, it would seem that from above even in the darkness he would appear as if a small constellation of the beauty of the stars was fixated to the ground longing to join its brothers and sisters in the sky. He used this moment away from the intrigues and machinations of his Palace to be lost in his thoughts, he pondered how above all else, he was Archon of his tribe, but in the same essence was restricted by mortality unlike the Gods of the world who were limitless in power and potential. He contemplated the good times and bad, always weighed with the responsibility he accepted for others, forever attempting to be brave on the inside yet with the self-awareness and willingness to see his flaws and work to be a better, kinder, more empathic. While not physically as strong as even many of his brethren he thought on how he tried to be brave on the outside, leading from the front regardless of personal cost. The Tribe had to see him flawless, the polished version to inspire such confidence yet there was a deeper internal torment how the mighty Archon debated that he was afraid of not being enough, of failing in sacred duty, of his purpose unfulfilled, weighty as it was. Tenebris's ideal musings would continue as he seemed lost from reality unawares of any others which may linger in this forest this night.

Re: A Walk in the Darkness (Open to all)

A beautiful night, gleaming stars, the moon in the dark sky giving off the faint moonlight throughout the vast forest. With a paced and steady walk Balthazar made his way through the thick woods on a non-specific path as the sounds of the forest echoed throughout. One sound though soon became prevalent and that soon appeared before him to be a small stream giving off a reflection of silver rays from moonlight, a faint memory resurfaced from bygone days as he placed both forepaws into the cool water. He felt the cold pinpricks wash over the old scars covering much of his forearms and then settled with a sigh.

Looking down he saw the reflection of an elder with tired eyes, deep wrinkles, and grey beard with white edges. Then over on the other side a reflection of a young nightwing pressing their forearms into the stream with similar scars though looked fairly recent and looked to be holding back tears. Moving his head up blinked to find himself alone at the small stream and sighed sadly, "Now I'm reminiscing of such bygone days? Oh Izunia your such a lonely old fool, imagining such things at your age." Glancing over in a direction gave a mirthless chuckle before looking back down, "And now my own eyes are playing tricks on me, the Archon here? There's no chance such a thing could occur on a night like this, I mean....what are the odds if true?" He voiced out loud without realizing it and put such thoughts in the back of his head. What even are the chances the great Archon Tenebris would be out here and by sheer luck managed to come a spot not far from them out on a walk as well? Just a trick of the light on tired old eyes. 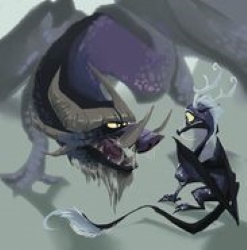 Re: A Walk in the Darkness (Open to all)

Malaki always enjoyed the solitude and the quiet of night. Well, aside from the sounds of the creatures that also called it home. From the whistle of a frog to the soft chirps of bugs. Only when they went silent did he ever worry, for that meant there was something else slinking in the dark, besides him of course. Tonight though all was well in its night song. At least that was the case an hour ago. At the moment the Night Wing healer was in a underground cave, one of many secret places that he grew and cultivated plants for the art of healing. But this one was the only underground location that was dedicated entirely to the cultivation of poisonous plants, grasses, mosses, and fungi. It was like a pocket of the rotten forest back on the mainland. He even had a pet carnivorous plant there.

Each thing in that cave held a vital part for his potions. Poison could also heal if you were immune to it. Something few dragons could appreciate. Malaki moved through the dark cave with a strange mask of sorts made of leather with dark glass eye covers. In a way it almost gave him a bug like look. This device was not a invention of fashion though, but practicality. Like the ones human plague doctors wore it was a tool of his trade, but unlike the human plague doctors his mask actually worked. Spores filled the cavern and glittered like starlight. The only thing stopping him from inhaling the poisonous spores of deadly fungi was a special moss packed into the snout of the mask that ate and fed upon it. At least the majority of the it.

The poisonous air created a miasma in the cave made worse by its confines. Immune to poison or not, he would pass out briefly without the protection as his body was overloaded by the sheer levels of the airs toxicity. After watering all his lovelies and feeding his pet flesh eating plant with a rabbit, Malaki left the cave along with the glowing fungi and plants behind. He rolled a large rock back over the entrance and was satisfied with the thud as it was set in place sealing his hidden garden.That left only one final touch, his trellis with thick vines growing over it. Content it was all hidden the young Night Wing removed his mask and took in a long deep breath of the refreshing cool night air and all the fresh scents that came with it.

Something was wrong though. Putting the mask into a satchel on his body harness Malaki went low to the ground like a cat would when trying to hide in tall grass. There was nothing, no sound of any kind. Even the soft chirps of the bugs was absent. He was not alone out here tonight. Blending with the shadows he moved cautiously through the night. But, in his haste the fool forgot to put on his goggles that would normally conceal the soft malachite green glow of his eyes.