Poem stared into the evening sun while the waves crashed against him on the sandy terrain. it was a pretty normal day, and like a normal day nothing changed. however he is still aware of the assassins that occasional find him, all hired by an unknown force, but every single one had failed in bringing him down. he walked forward into the shallow water then to rest, only thinking of how long his journey has been, only having met such few he would consider nice to be with. the sun was beginning to set, showering the sea in darkness and depth. The water became cold as his eyes became heavy. the blurriness of his memories remained as he slept, waiting for sunrise.

Zyra was bugging the adults if she could go explore. It's been boring for a while for her but she wanted to do something. She sighed as almost all of them said "Not now." or "I'm busy." She decided to ask a few more. She really wanted to explore. 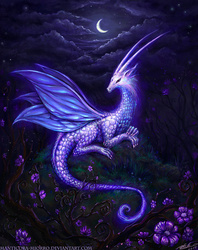 Tulvir left the Healer's grotto and stretched as if he'd been laying down for a solid two weeks. Actually, that was exactly how long it had been. The half-IceWing Guardian had gone on a patrol-and-search with two other Guardians; they were attacked by a monster and only Tulvir managed to survive. He spent the past two weeks resting under Healer's orders.

Now, though, the Guardian was ready to return to his duties. Surely Prince Vilkas, the King's nephew, could use a helping paw with the monster patrols. Then again, Vilkas was a demigod who could become a monster himself. Tulvir was about to inform the King of his recovery and inquire about anything he could assist with, when he noticed a Hatchling wandering around. It was a NightWing Hatchling by the looks of her. She was asking every adult that she happened upon if she could go exploring.

The Guardian sighed. It was heartbreaking to see a Hatchling so eager to venture out into the world, when it was no longer safe for them to do so. If only she had been born a decade or so sooner... Tulvir walked up to the Hatchling. "Hello there. I hear you want to explore? Surely you know that isn't safe?"

Poem woke to sound of wing beats, overhead. He dashed into the water to hide. he poked his head out to see an EarthWing. At this he knew where he was, he was in the EW territory most likely in its outer ring, at least he thought he was. Poem has been through this area many times before, it being one of few places he sees the dragons. The dragon continued to fly further inland, not noticing him in the water. The sun was peeking over the horizon, hovering above the water. He slowly walked out of the sea, his blade dragging behind him. maybe he should have said hello, the dragon did not seem to be looking for something. but that thought sounded stupid as he remembered he doesn't fly, He sighed. He looked forward at the path in front of him. "I hope whats ahead doesn't kill me" he said sadly as he walked on.

Zyra seen the dragon walk to her. "Hi there!" She happily chirped out. "Yea- I reallyyy want to explore. But what do you mean? Why is is so dangerous? I don't understand..." Zyra's heart sank when she asked, already confused.

Another dragon who was completely oblivious to the terrible state of the world. And this one was a Hatchling. Were her parents trying to shield her from it by not telling her, though it would do her more harm than good? Or was she an orphaned foundling brought into the tribe with no memory of what happened to her parents--mayhaps because they were killed before she hatched? Either way, it saddened the half-IceWing to have to explain this.

"Our world is no longer our own. Terrible monsters have invaded it, creatures capable of wiping us out completely. You are just a Hatchling... you are our future and have no business wandering around by yourself, even if these monsters didn't exist." Tulvir sighed. He hated to disappoint the Hatchling. It wasn't her fault that she had been born during a dangerous time. "The King will be very upset if he finds out, but... perhaps I can take you exploring for a short while. But you must do everything I tell you immediately and without question, understand?"

The terrain around started to become more rocky and stone like as he pressed onward, waves crashing against the elevated cliff side. He by far prefers sand but he felt a little strange that day, as if he wanted to explore. He fought this urge and held himself back from going until it eventually won. The sky above was a dark grey and the sun was obscured out of view, leaving the world in a blanket of light grays. He looked around the semi barren landscape with scattered trees and a lack of grass, thinking that maybe he should turn back."BOOOM" Thunder cracked in the distance. his eyes widened, Poem looked out to the ocean from the edge of the cliff to a small thunder storm, coming slowly this way. "Yeah this was a bad idea." he looked down over the cliff side, small overhanging ledges scatter the cliff side. Some of them leading to small caves that should be large enough to fit him. Sharp rocks littered the bottom of the cliff, waves crashing into them, sharpening them ever so more. He carefully hopped down slowly, one ledge at a time. The crashing waves below enshrouded the cliffs in a calm mist that made the rocks somewhat slippery. He occasionally stubbed a talon on his way to shelter. Another bright flash of light was followed by drizzle, which became more evident with each passing moment. But at last he found it, a cave just large enough for him alone to fit into. it was just about twenty, no thirty feet below the top of the cliff. but still high enough for it not to flood and sweep him out. the rain started to get heavy, he slowly tucked his wings in and squeezed in tail first. He felt an odd familiarity about this small cliff side cave, as if he had been somewhere like this before. The thunderstorm now truly lived up to its name, painting the sky in whites and flashes of glowing electric blue that screamed and roared. And Poem had a front row seat. He watched the rain pound against the entrance of the cave. He laid his head down knowing he would have to wait out the storm. Staring into the distant ocean. His eyes began to feel heavy, till the sound of rain eventually soothed him to sleep.

As she listened her heart sank. She was really hoping to explore. She sighed as they said that. Though she continued to listen to the Guardian.

At that particular moment, Vilkas, the aforementioned nephew of King Baldirak, walked up. "You know you could get in trouble for that, right Tulvir?" the half-FireWing asked.

"I know. But you know how Hatchlings are these days. Most are orphaned or their parents simply haven't taken the time to explain the dire situation dragonkind is in. And as a result, the sneak away from the safe zones to go exploring the world."

"That's why the King is creating a group to watch over the Hatchlings, keep them from sneaking off. It is sad that these Hatchlings can't enjoy the world you and I did, free of the monsters.But their safety and survival is more important than letting them live like Hatchlings. Still..." The demigod paused and looked at Zyra and sighed. "Even if you're just taking her to another safe zone, you know you need at least two other able adults with you. Fortunately, with my ability, you'll only need one. I'll go with you and if Uncle Dirak finds out, I'll take the blame."

Tulvir nodded. "Thank you, Prince Vilkas. But what if His Highness finds out on his own?"

"Then... we could just run." Vilkas said with a laugh. "And please, just call me Vilkas. No need to be so formal."

"Sure thing, Vilkas. It just feels wrong not to acknowledge a member of the royal family. Okay, Zyra, Vilkas will be coming with us." Tulvir instructed the Hatchling to ride on his back. Once she had gotten on, the two half-FireWing Guardians took to the air, flying off in the direction of the EarthWing safe zone. The safe zone included a good portion of the Twilight capital, which was mostly in ruin now. Construction had not yet begun on it. Vilkas and Tulvir didn't fly all the way there, however. Even though they had come to allow the Hatchling to explore, they still needed to patrol. They landed just outside the western border of EarthWing territory. Vilkas morphed to his mutant form ((see Villkas' app for what that looks like)) and led the way.

Poem woke to the clear sea stretching all the way to the horizon, clear blue sky with the haze of red from the sun somewhat above him. He stretched his heavy body in the warm cave that surrounded him. He looked below him over the rocky cliff side from his safe abode. The sharp rocks below prevented him from diving into the water, he looked above to notice a lack of places to climb back up. he should have thought of this, however he did not blame himself for the storm. He shook off his guilt and pressed on. He knew he would have had to find a way out eventually. The sun was at its peak in the sky as he began his climb, slowly he gained distance. He was no good at climbing, being thankful that he only had about fifty feet to climb. However part of him worried if the blade at the end of his tail would fall below. But he assured himself that he tightened it enough. As his climb continued he noticed he was a lot stronger than he thought lifting himself up after he found each new place to grab on the rocky cliff side. Upon reaching the top he again noticed the barren land he stood before. For it was not a forest but more desert like, rocks as abundant as ever. trees barely found in sight. all the more reason to stay close to the water he thought. "Onward, ever onward" As he slowly continued ahead.