Appearance:
Dragonborn look very much like dragons standing erect in humanoid form, though they lack wings or a tail. The first dragonborn had scales of vibrant hues matching the colors of their dragon kin, but generations of interbreeding have created a more uniform appearance. Their small, fine scales are usually brass or bronze in color, sometimes ranging to scarlet, rust, gold, or copper-green. They are tall and strongly built, often standing close to 6½ feet tall and weighing 300 pounds or more. Their hands and feet are strong, talonlike claws with three fingers and a thumb on each hand.

The blood of a particular type of dragon runs very strong through some dragonborn clans. These dragonborn often boast scales that more closely match those of their dragon ancestor—bright red, green, blue, or white, lustrous black, or gleaming metallic gold, silver, brass, copper, or bronze. 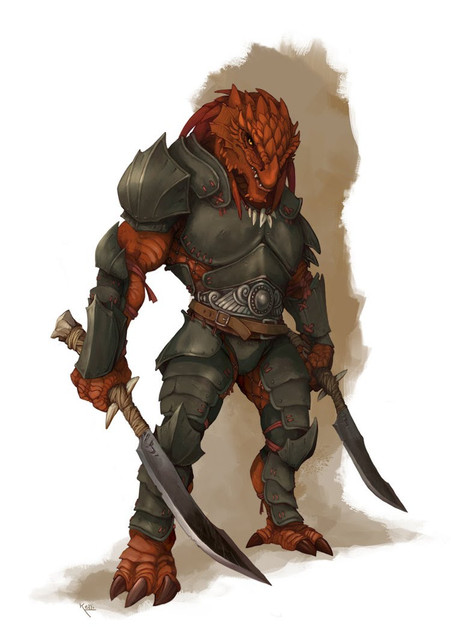 Kohzahn Usk is a tall Dragonborn with bronze scales, a hulking beast to behold, he has various black tribal markings/tattoos along his body resembling that of Draconian language. He stands at an astonishing 6'8" and his appearance quite intimidating; scars covering a good portion of his body both through battle and torture. His eyes are silver round pupils with claws as silver as the moonlight. There are tendrils that are attached to his head that come down just past his shoulders, acting as some form of hair in the shape of dreadlocks.

Vengeful Assault. When you take damage from a creature in range of a weapon you are wielding, you can use your reaction to make an attack against that creature. You can do this once per short or long rest.

Breath Weapon. You can use your action to exhale destructive energy. It deals damage in an area according to your ancestry. When you use your breath weapon, all creatures in the area must make a saving throw, the type of which is determined by your ancestry. The DC of this saving throw is 8 + your Constitution modifier + your proficiency bonus. A creature takes 2d6 damage on a failed save, and half as much damage on a successful one. The damage increase to 3d6 at 6th level, 4d6 at 11th, and 5d6 at 16th level. After using your breath weapon, you cannot use it again until you complete a short or long rest. Instead, you may use your breath weapon a number of times equal to your Constitution modifier. You regain expended uses on a short or long rest.

Rage
In battle, you fight with primal ferocity. On your turn, you can enter a rage as a bonus action.

While raging, you gain the following benefits if you aren’t wearing heavy armor:

You have advantage on Strength checks and Strength saving throws.

When you make a melee weapon attack using Strength, you gain a bonus to the damage roll that increases as you gain levels as a barbarian, as shown in the Rage Damage column of the Barbarian table.

You have resistance to bludgeoning, piercing, and slashing damage.

If you are able to cast spells, you can’t cast them or concentrate on them while raging.

Your rage lasts for 1 minute. It ends early if you are knocked unconscious or if your turn ends and you haven’t attacked a hostile creature since your last turn or taken damage since then. You can also end your rage on your turn as a bonus action.

Once you have raged the number of times shown for your barbarian level in the Rages column of the Barbarian table, you must finish a long rest before you can rage again.

Unarmored Defense
While you are not wearing any armor, your Armor Class equals 10 + your Dexterity modifier + your Constitution modifier. You can use a shield and still gain this benefit.

Danger Sense
At 2nd level, you gain an uncanny sense of when things nearby aren’t as they should be, giving you an edge when you dodge away from danger.

You have advantage on Dexterity saving throws against effects that you can see, such as traps and spells. To gain this benefit, you can’t be blinded, deafened, or incapacitated.

Primal Path
At 3rd level, you choose a path that shapes the nature of your rage. The Path of the Berserker is detailed at the end of the class description, and additional primal paths are available in other sources. Your choice grants you features at 3rd level and again at 6th, 10th, and 14th levels.

Personality Traits:
Kohzahn Usk is an individual best left alone. An attitude of fire and a will stronger than iron, Kohzahn stands from the rest of his kind, remaining in a grey area than going to extremes of simply good or evil. He is for himself only and has no bonds to others, the only thing he truly bonded with was his lute which he greedily keeps. And with the intelligence of an ignorant commoner, he isn't well suited in cities nor is he for the urban life; preferring the life of a hunter and woodsman free of the bonds of government. Kohzahn also forsaken the act in religion, preferring to give to the earth what he takes instead of blindly being loyal to some deity; not that he doesn't know they exist. And that doesn't stop him from tearing apart the next prey and foe. He lives for nature yet also for the glory of the kill, loving every minute of battle yet knowing his limits.

Ideals
The ideal Kohzahn has, one really, is the freedom to do as one pleases. The world is ripe for the taking, being selfish in this regard, Kohzahn disregards good deeds without payment. Being a hired hand to track down an individual is more his style, though he prefers to hunt and keep to the woods, preferring a journey of solitude and bloodshed against those who dare oppose him, especially any form of Goblin.

Bonds
The Dragonborn is extremely tough to bond with, as he is solitary even toward his own kind. The only things he is clearly bonded to are his weapons and lute. Very few can even earn a respectful glance let alone a compliment, very many jabs and japes come from the tongue of this feisty creature.

Flaws
Ignorant in technology of any kind except those that trap the next hunt, hot headed and always looking for a fight, Kohzahn is nothing short of barbaric. He does not get along well with others and doesn't even try to intimidate then, instead opting to jacking them in the jaw to get the conflict over with. The more Kohzahn fights the more bloodthirsty and blind he becomes, leaving him to attack even allies.