Name: Vauban Zapwick
Race: Kenku
Gender: Male
Age: 39
Height/Weight: 4'5''/95 lbs.
Appearance: Kenku are a flightless race that resemble ravens in general with bird-like talons for hands and feet. They had dark and beady eyes with a long dark-hued beak, head and torso covered in soft feathers of a dark russet-brown color while their scrawny limbs were bare and scaled like a bird's. Most would consider seeing a kenku more a pest, a well-known sneak thief and obnoxiously annoying with mimicking every sound. 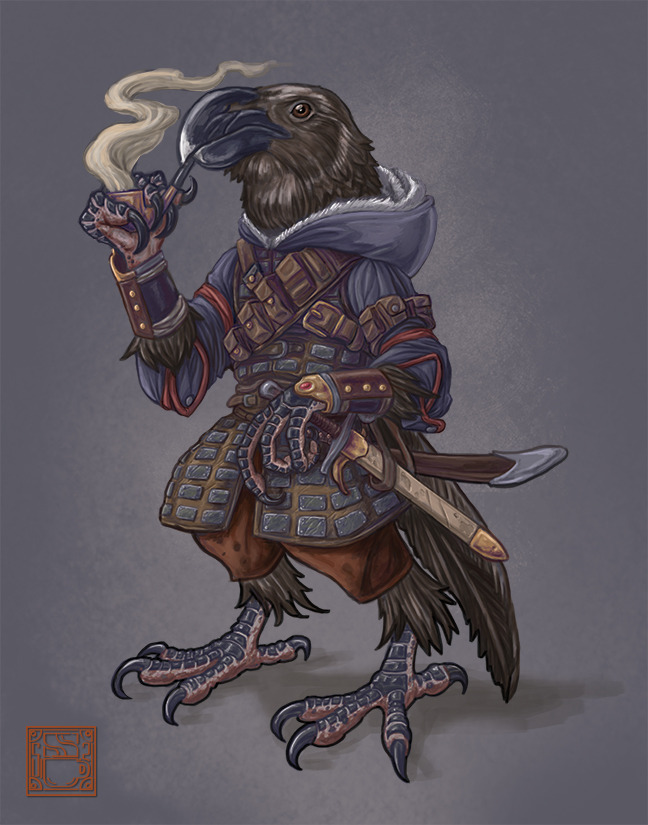 Vauban would fit the norm among his own and so would most others. Though his feathers have a sheen from keeping them clean, a refined look, and a more upright posture compared to other kenku. He isn't built to be a fighter, but can keep up with most and yet a constant tired look could be seen with bags under his eyes past his spectacles that rest on the beak.

Traits and Abilities:
Expert Forgery - You can duplicate other creatures' handwriting and craftwork. You have advantage on all checks made to produce forgeries or duplicates of existing objects.
Kenku Training - You are proficient in your choice of two of the following skills: Acrobatics, Deception, Stealth, and Sleight of Hand. Chosen Skills: Deception, Acrobatics
Mimicry - You can mimic sounds you have heard, including voices. A creature that hears the sounds you make can tell they are imitations with a successful Wisdom (Insight) check opposed by your Charisma (Deception) check.

Languages:
Common, Auran, Draconic
Can speak only by using the Mimicry trait.

Spoiler:
At 1st level, you learn how to invest a spark of magic in objects that would otherwise be mundane. To use this ability, you must tinker’s tools, or other artisan’s tools in hand. You then touch a Tiny nonmagical object as an action and give it one of the following magical properties of your choice:

The object sheds bright light in a 5-foot radius and dim light for an additional 5 feet.
Whenever tapped by a creature, the object emits a recorded message that can be heard up to 10 feet away. You utter the message when you bestow this property on the object, and the recording can be no more than 6 seconds long.
The object continuously emits your choice of an odor or a nonverbal sound (wind, waves, chirping, or the like). The chosen phenomenon is perceivable up to 10 feet away.
A static visual effect appears on one of the object’s surfaces. This effect can be a picture, up to 25 words of text, lines and shapes, or a mixture of these elements, as you like.
The chosen property lasts indefinitely. As an action, you can touch the object and end the property early.

You can give the magic of this feature to multiple objects, touching one object each time you use the feature, and a single object can bear only one of the properties at a time. The maximum number of objects you can affect with the feature at one time is equal to your Intelligence modifier (minimum of one object). If you try to exceed your maximum, the oldest property immediately ends, and then the new property applies.

Spoiler:
This spell is a minor magical trick that novice spellcasters use for practice. You create one of the following magical effects within range:

• You create an instantaneous, harmless sensory effect, such as a shower of sparks, a puff of wind, faint musical notes, or an odd odor.

• You instantaneously light or snuff out a candle, a torch, or a small campfire.

• You instantaneously clean or soil an object no larger than 1 cubic foot.

• You chill, warm, or flavor up to 1 cubic foot of nonliving material for 1 hour.

• You make a color, a small mark, or a symbol appear on an object or a surface for 1 hour.

• You create a nonmagical trinket or an illusory image that can fit in your hand and that lasts until the end of your next turn.

If you cast this spell multiple times, you can have up to three of its non-instantaneous effects active at a time, and you can dismiss such an effect as an action.

Spoiler:
A frigid beam of blue-white light streaks toward a creature within range. Make a ranged spell attack against the target. On a hit, it takes 1d8 cold damage, and its speed is reduced by 10 feet until the start of your next turn.

Spoiler:
A creature you touch regains a number of hit points equal to 1d8 + your spellcasting ability modifier. This spell has no effect on undead or constructs.

Spoiler:
Each object in a 20-foot cube within range is outlined in blue, green, or violet light (your choice).

Any creature in the area when the spell is cast is also outlined in light if it fails a Dexterity saving throw. For the duration, objects and affected creatures shed dim light in a 10-foot radius.

Spoiler:
A shimmering field appears and surrounds a creature of your choice within range, granting it a +2 bonus to AC for the duration.

Stat Rolls.
_______________________
"You'd be surprised at what a elderly dragon illusionist such as myself can come up with young one."
"Killed me? Sorry to burst your bubble there, but all you killed was a illusion. Heh, I may be old, but I'm not that senile yet."
Dharmith
Calemvir
Phantasmas
Vladiana
Aquantei

The member 'Phantasmas' has done the following action : Dices roll