Traits and Abilities:
Favored Enemy
You have advantage on Survival checks to track your favored enemies, as well as on INT checks to recall information about them.
Dwarves
Elves

Natural Explorer
You have a favored terrain type. Your proficiency bonus is doubled for proficient skills when you make an INT or WIS check related to it. While traveling for an hour or more in your chosen terrain, difficult terrain doesn’t slow your group’s travel, your group can’t become lost except by magical means, you remain alert to danger even when you are engaged in another activity, you can move stealthily at a normal pace (while alone), you find twice as much food while foraging, and while tracking creatures, you learn the exact number, sizes, and how long ago they passed through the area.
Underdark

Fey Ancestry
You have advantage on saves against being charmed, and magic can’t put you to sleep.

Trance
You don't need to sleep, but meditate semiconsciously for 4 hours a day. While meditating, you can dream after a fashion; such dreams are actually mental exercises that have become reflexive through years of practice. After resting in this way, you gain the same benefit that a human does from 8 hours of sleep.

Superior Darkvision
You can see in darkness (shades of gray) up to 120 ft.

Sunlight Sensitivity
You have disadvantage on attack rolls and on Perception checks that rely on sight when you, your target, or whatever you are trying to perceive is in direct sunlight.

Feature: Wanderer
You have an excellent memory for maps and geography, and you can always recall the general layout of terrain, settlements, and other features around you. In addition, you can find food and fresh water for yourself and up to five other people each day, provided that the land offers berries, small game, water, and so forth.

Spells and Powers:
Dancing Lights
Range 120
You create up to four torch-sized lights within range, making them appear as torches, lanterns, or glowing orbs that hover in the air for the duration. You can also combine the four lights into one glowing vaguely humanoid form of Medium size. Whichever form you choose, each light sheds dim light in a 10-foot radius.

As a bonus action on your turn, you can move the lights up to 60 feet to a new spot within range. A light must be within 20 feet of another light created by this spell, and a light winks out if it exceeds the spell's range.

Personality:
Nyx often struggles to fit in not only because of the negative attention she receives due to her race but also due to her own relational struggles. She can make surface level friends with grate ease and she herself appears rather charismatic and charming. However developing any relationships any deeper than that or maintaining existing relationships Nyx find's very difficult. She has a hard time feeling like she's making any sort of connection with people.

Nyx would really like to have children however she's cautious about raising children in such a hostile world. She'd be really cautious about who she had children with as a result with compounded with her relationship difficulties and Nyx will often get depressed that it'll likely never happen.

When out and about normally Nyx is almost a completely different person than when she's on business or in a hostile or serious situation. She becomes incredibly aggressive and threatening and she has no issue with taking life if she thinks they deserve it. Her go to method for getting information or negotiating a situation is intimidating them which is when she uses her race's reputation to her advantage. She'll threaten the life of an innocent person with seemingly every intention to follow through with her threats sometimes going to extreme measures to reassure them of her conviction to follow through. However if her methods don't end up succeeding, if she believes them innocent she won't actually follow through and will drop her bluff.

Although she doesn't seem it Nyx keeps track of her surroundings with paranoid levels of detail. For example if eating in a tavern she'll position herself so she's facing the main entrance and keep track of everyone who enters or leaves. It's become such a habit she can easily multi task this while doing just about anything else. One of the few things that will reliably distracter her is music. Nyx enjoys music very much and if traveling with companions that need sleep Nyx will often find somewhere away where she won't disturb them to play music on her Lyre to pass the time.

Nyx isn't a huge fan of rules or being told what to do however she also isn't a fan of causing trouble so she is often at odds with being tempted to break the rules or do the exact opposite of what someone told her to do just for the sake of it.

Nyx had been raised to have a deep hatred for Dwarves and Elves in particular and while she quickly got over her racism towards Elves with the help of Farvalur she still takes great issue with Dwarves and makes little effort to hide her prejudice.

While in towns Nyx tends to be most active during the daylight hours. Though she is always wearing her hooded cloak to hide her race but also to protect her eyes from the light. She finds people are far more distrustful and hostile towards a Drow at night than during the day and probably rightly so. Outside of towns though she'll switch to a more nocturnal schedule assuming she isn't traveling with anyone who isn't so fond of that. Not that it makes a big difference since she only needs 4 hours for a full rest.

Nyx has an intense fear of mind altering magic and people or objects that wield that it. Her own mind, thoughts, and actions are one of the only things she feels she can trust and rely on. Messing with someone's free will especially her own is worse than even death as far as her moral compass is concerned and she refuses to trust anyone capable of wielding that power and judges their ability to do so in the first place harshly.

History:
The Jawawa family had a long history of producing some of the best assassins to grace Drow society and are very proud of the position in society they have achieved as a result of it. So simply by being born into this family very high expectations were put on Nyx. Problems arose right out of the gate though as Nyx didn't play well with others. But not in the bullies them sort of way. She quickly grew up into a very independent thinker and a free spirit something that didn't mix well with the community focused Drow society. She was still expected to become a dependable assassin though and was drilled rigorously with special attention directed towards elves and dwarves. They really didn't like those two races and Nyx was taught to dislike them as well, except fellow Drow naturally. In time she grew into an adult and was sent out to eliminate whoever and whatever she was told too. It should have been plainly obvious that Nyx's loyalties could be easily called into question but her parents and family loved her very much. As the first born to the head of the family it would also be a dishonor if she didn't become a well respected assassin and invaluable asset to the community.

As Nyx left her community more and more for missions and interacted with the world outside she quickly began having doubts. Specifically doubting her people and their way of thinking. These doubts put a lot of stress on her whenever she was sent on missions and when she'd get home her mind would be buzzing and rest would be hard to get. She ended up turning to music to relax her when stressed and sooth her mind. It wasn't until an assassination attempt gone horribly wrong where the one she was supposed to kill ended up saving her life an elf named Farvalur. This really shattered her world view and was the turning point for when she started taking seriously her doubts and really evaluating things rather than just trying to ignore them. She ended up becoming close friends with the elf who saved her life. Farvalur eventually helped her finally decide to leave the Drow behind and start a new life.

Starting a new life was much easier said than done though. People didn't trust Drow and it was almost impossible to find honest work. Nyx eventually started to put her skills to work as a bounty hunter. It's a lonely line of work though and if she could find some honest work with some people to socialize with she'd take it. 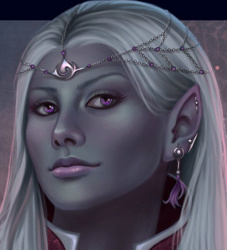