Appearance: Frogfolk are amphibious creatures with red, yellow or white eyes and thin pupils. Their skin is typically green, though poisonous ones have brighter colors. They are slimy and slippery creatures and are prone to hopping fast and jumping high. The description given by people who have seen frogfolk have called them slim, long, green amphibians walking on two legs. Some call them angels, and some call them devils. Those people had never seen fiends or celestials before. 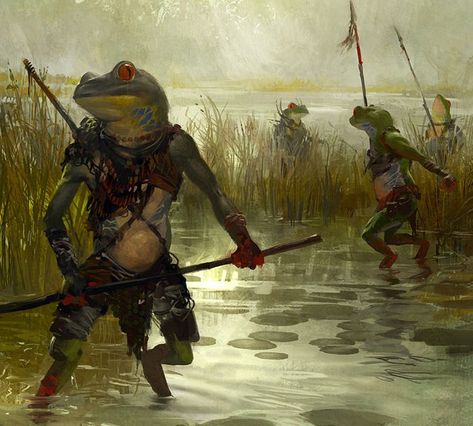 Lightleaps appearance is nothing short of... Exotic to the average human. He is quite fit, being considered part of the hunters party of his tribespeople from before, he has some decent muscle albeit slimmer compared to the brawny warrior. Lightleap is, as one could guess, built to be agile and swift, his form meant to be small and get out of tight situations. Or in them. He is grassy green with deep bronze colored polkadots, Lightleaps jaw down to his belly is said bronze color, while his eyes are the same bronze with red slit pupils.

Proficiencies:
Armor: Light Armor, Medium Armor, Shields (druids will not wear armor or use Shields made of metal)

Leather Armor, Light Armor, AC 11, Weight: 10.
The Breastplate and shoulder protectors of this armor are made of leather that has been stiffened by being boiled in oil. The rest of the armor is made of softer and more flexible materials.

*Antitoxin: A creature that drinks this vial of liquid gains advantage on Saving Throws against poison for 1 hour. It confers no benefit to Undead or Constructs.


Druidic Focus:
A druidic focus might be a sprig of mistletoe or holly, a wand or scepter made of yew or another special wood, a staff drawn whole out of a living tree, or a totem object incorporating feathers, fur, bones, and teeth from sacred animals. A druid can use such an object as a spellcasting focus.

Swimmer. Frogs are more aquatically attuned than toads. You have a swimming speed of 30 feet.

Amphibious. You can breathe in both air and water.

Powerful Legs. Frogs have great legs for jumping. Your jump height has an additional 10 feet.

Tongue Slap. Your tongue is a powerful natural weapon, which you can use to make unarmed strikes. If you hit with it, you deal piercing damage equal to 1d6 + your Strength modifier, instead of the bludgeoning damage normal for an unarmed strike.

Camouflage. Your skin is often colored according to your surroundings. You are proficient in the Stealth skill.

Whispering to the spirits of nature, you create one of the following effects within range: * You create a tiny, harmless sensory effect that predicts what the weather will be at your location for the next 24 hours. The effect might manifest as a golden orb for clear skies, a cloud for rain, falling snowflakes for snow, and so on. This effect persists for 1 round. * You instantly make a flower blossom, a seed pod open, or a leaf bud bloom. * You create an instantaneous, harmless sensory effect, such as falling leaves, a puff of wind, the sound of a small animal, or the faint odor of skunk. The effect must fit in a 5-foot cube. * You instantly light or snuff out a candle, a torch, or a small campfire.

A flickering flame appears in your hand. The flame remains there for the duration and harms neither you nor your equipment. The flame sheds bright light in a 10-foot radius and dim light for an additional 10 feet. The spell ends if you dismiss it as an action or if you cast it again.
You can also attack with the flame, although doing so ends the spell. When you cast this spell, or as an action on a later turn, you can hurl the flame at a creature within 30 feet of you. Make a ranged spell attack. On a hit, the target takes 1d8 fire damage.
This spell's damage increases by 1d8 when you reach 5th level (2d8), 11th level (3d8), and 17th level (4d8).

A creature you touch regains a number of hit points equal to 1d8 + your spellcasting ability modifier. This spell has no effect on undead or constructs.

At Higher Levels. When you cast this spell using a spell slot of 2nd level or higher, the healing increases by 1d8 for each slot level above 1st.

Grasping weeds and vines sprout from the ground in a 20-foot square starting from a point within range. For the duration, these plants turn the ground in the area into difficult terrain.
A creature in the area when you cast the spell must succeed on a Strength saving throw or be restrained by the entangling plants until the spell ends. A creature restrained by the plants can use its action to make a Strength check against your spell save DC. On a success, it frees itself.
When the spell ends, the conjured plants wilt away.

You gain the ability to comprehend and verbally communicate with beasts for the duration. The knowledge and awareness of many beasts is limited by their intelligence, but at minimum, beasts can give you information about nearby locations and monsters, including whatever they can perceive or have perceived within the past day. You might be able to persuade a beast to perform a small favor for you, at the GM's discretion.

Personality Traits:
Quirky, silent or talkative half the time, and pacifistic somewhat. Lightleap is a hermit who watches over and defends nature and the forests, jungles, and swamps with whatever other Druids there are. He is light-hearted and kind, though his tone as a hermit left him a but unhinged and he tends to ramble on about random subjects.

Ideals
Lightleap is generally kept to himself under the ideal that he has no restrictions to do as he pleases. Though still tending to nature, he will do what he must to defend and preserve it. He isn't very big on deities, following the earthly elementals and their wisdom compared to the hierarchy of the gods who are more divine than natural. A bit skittish toward folk, Lightleap believes that if he sees decent folk in trouble he'll do what he can to help but prefers to avoid conflict if necessary.

Bonds
The bond between Lightleap and the earth in inseparable. He follows more life of a monk but not religiously, caring for nature and it's wonders and oddities. He is quick to make conversation, though this might be due to his life as a hermit since his tribe was wiped out by a rival one. However Lightleap prefers solitude, he's not afraid of giving directions and will even offer them something to eat or drink, only when coming across his home. He's easy to get along with as easy it is for him to leave.

Flaws
Lightleap is no stranger when it comes to fighting, but his loss of his tribe left the frog abandoned and ridden with survivors guilt. He generally avoids fighting if necessary, and will even dissuade others from doing so as well. Lightleap is afraid of Dragonborn and Orcs as they have been mortal enemies to Frogfolken people.
_______________