Name: Takeo Takeuchi
Alias: Onryō
Age: 26
Gender: Male
Sexuality: Unknown
Personality: Takeo is an open book at times, his actions giving a glimpse into his past. But mostly, he is rather hard to read and gives little about himself. While heis very cold and appears not to care about anything but food, Takeo is very protective of his little sister. Aside from that, however, Takeo is very much the kind of guy who only looks out for his own interests.

Fears:  Running out of food, harm coming to his sister, going to sleep.

Strengths: Takeo is a good fighter. He is good at sneaking around when it comes to stealing food and he is very good at lying. He can "play a part" well and convincingly.

Weaknesses: Takeo suffers from night terrors, often not sleeping much. In rare cases he becomes submissive to displays of dominance, but otherwise is combative when facing authority figures. His right hand functions only half as well as his left, due to the build up of scar tissue from an old wound. His need to hoard food often gets him into trouble with vendors, as he will steal even if he has the coin to pay for it.

Life Info
Home: Kakos
Profession: Whatever he is hired or forced to do.
Family: Isuna "Holo" Takeuchi (Adopted sister)

General Appearance
Height: 5'7"
Hair: Black
Eyes: Brown
Appearance: Takeo is 137lbs. He has straight black hair that comes almost to his shoulders, and a thin beard and mustache. His eyes are brown and almond shaped. His skin is slightly tanned. Takeo has a scar on his right hand spanning the entire width of his palm, a scar on his left side from his hip to his groin, and several scars on his back, most concentrated at his shoulder blades. His body is on the leaner side and modestly muscled.

Skills and Abilities
Skills Takeo isn't a trained combatant, but he is surprising adept at fighting. He has a silver tongue and is an average pickpocket.

Equipment: Two daggers and an axe.

Combat Style: Takeo's fighting style is often compared to a deranged person who's just seen their comrade or loved one killed by a monster.

Background
History: Takeo was orphaned and enslaved at the age of 3. At the age of 11, he found himself free and living as a nomad until he finally settled in Kakos at 17. A month after arriving in Kakos, Takeo rescued Isuna, a little girl only 6 years old. He's looked after her ever since and even gave her a nickname. He officially adopted her as his sister one day in Anthropinos when she gave Takeo's surname after being asked for her own.
RP Sample: I'm Baldi, so you don't need one. 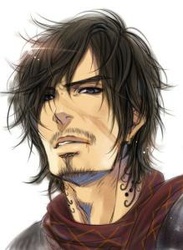