Was it a curse to feel pain? Better yet, was it a punishment to live in a world of a dying breed? More specifically, dragons? That was today's sob question of one such creature, someone who could not handle the death of many nor the real, or imaginative, neglect of their parent. Most dragons got on with their lives and in today's environment it seemed what was left of them made the best of it. There was still one of few who drowned in their own sorrows, and they tried their best to get over their past.

Typical of Incus to have a sob story, something he's been trying to correct and deflate since he discovered his still living mother... Who he had a falling out with due to poor choice of words. That was months ago, and he still couldn't get over his anger nor his grief. So far it all subsided to a dwindling flame but still haunted him, why it did he never knew. That was a lie. Incus could answer that question easily, but he continued to lie to himself in the fact he couldn't find peace nor happiness.

In truth, Incus hadn't known the two in many years, silence and sorrow, fear and anger, he knew the group of drunken toxicity but couldn't pull himself away. For the first time in years he actually felt something when trying to interact at the little festival between those Imperials, he felt joy and surprise when a certain goddess revealed herself, and a daughter she had. Why was he still so skittish? Why was Incus still so weary and mistrusting of others, including his own mother? It was still that emotion he felt, the fear, anger and sorrow that he developed from since he was a hatchling. And it was those emotions in which leads to an eventual downfall.

Incus was a demigod, son of Astral the goddess of the stars and son of... Nimbus, the god of death. Years ago, Incus was more attached to his mother more than anything, Nimbus' mistreatment of Astral clung to Incus like a tick on a hound. Though that treatment was scarce, it was when his own mother faked her own death and left behind a small ball of scales, Celestia. It was Incus who blamed Nimbus for not saving her, damning himself in the process with the newfound resentment toward his other parent, and the loss built and eventually exploded. If he was the god of death, why couldn't Nimbus prevent Astrals death? The simple answer was she was never dead to begin with.

It wasn't until months ago that Incus figured out his problems. He blamed everything on Nimbus, and it was the misconception that brought the young dragon to his downfall then. Nimbus found love in his betrothals death in the form of Celestia, he didn't realize how much he'd miss Astral until that day came. And so he loved his hatchlings and children more so, but Incus didn't want that. He wanted his father to admit he let Astral die, that he chose not to bring her to their domain. He had many questions, done ludicrous, as to why?! Yet, the simple answer was that Astral was never dead to begin with. And Incus felt he doubt even Nimbus knew until much later.

Flying over the landscape was possibly the best way to blow off pent up aggression. Flying at the fastest speed was possibly another best way. Flying too low trapped in thought and crashing into a massive pine tree wasn't the best plan at all. Incus woke up as the sun began it's slow crawl from the skies center to the horizons depth, the day still bright out albeit chilled. As Incus stood he felt a sudden pinch in his right wing and looked around to it. The wing was spasming slightly when he tried to keep it still, likely another cramp or crook he received from either the crash or the fall. Or both.

It was time to head back over to his den, Incus shouldn't be too far from it at all, a forgotten ruin of some ancient civilization well hidden in a mountain face within the Earthen territory. Incus knew the day was somewhat safer than at night when most the animals and monsters came out, some still around during the day but not as much. With a meager huff, Incus was dismayed as he turned to walk in the direction of his home due west. Last thing he needed was getting held up by some hungry beast... Or worse.

Incus knew he needed to be better, his attitude and his emotions, he knew that he was coming undone by the toxicity of himself. It was going to be extremely harsh doing that, he felt like he didn't have the strength to rid himself of the past, his own interpretation of his past. Something false covering the whole truth, and he did it himself. The Fury didn't know where Astral even was, he was banished from his father's domain not because Nimbus hated him, but because like poison Incus' emotion were effecting the other siblings causing them grief and resentment toward each other. Perfect role model of the season, he jests to himself.

The Fury lacked joy, happiness, trust and self love, most importantly self love. He felt like a burden years ago, his confidence drained and no one else to trust but himself. It truly was all his fault. And Incus wanted to stop that, but he didn't know if he had the strength to do it. It was best he tried it sooner than later, but perhaps not in the middle of the forest with any predators waiting to snatch him up. Without his wings, Incus knew it was going to be a long walk.
_______________________

Soshi walked through the woods, grumbling to herself about everything. Even if she'd met Paradox, it didn't help alleviate the fact that she still felt hunted. She was a goddess and she still didn't feel safe from the other gods out there. It wasn't like she asked to be given all the powers she had right now. She stopped and sat under a tree, taking some dirt and beginning to shape it. Soon, the earth not only seemed to change shape, but it also seemed to compress until it formed a blue crystal in the shape of a mosasaur.

She sighed and put in in her bag. Using her magic like that... it could lead to one of the other gods could find her. She looked around, getting back up to get moving back home before hearing something. Something big. She turned to see a dragon walking through the woods, which made her quickly hide, but she could feel something.... Energy?

It was like Paradox's, but weaker. Oh no.... She had to try and make herself look more... dragony. She then had an idea though. She was good at making puppets out of earth.... She had it. She would quickly build up earth around her, basically letting herself form into a dragon-like appearance. Surrounded by earth and stone, she'd be safe, and now she hoped she'd pass as a dragon.... One with fire-like eyes. 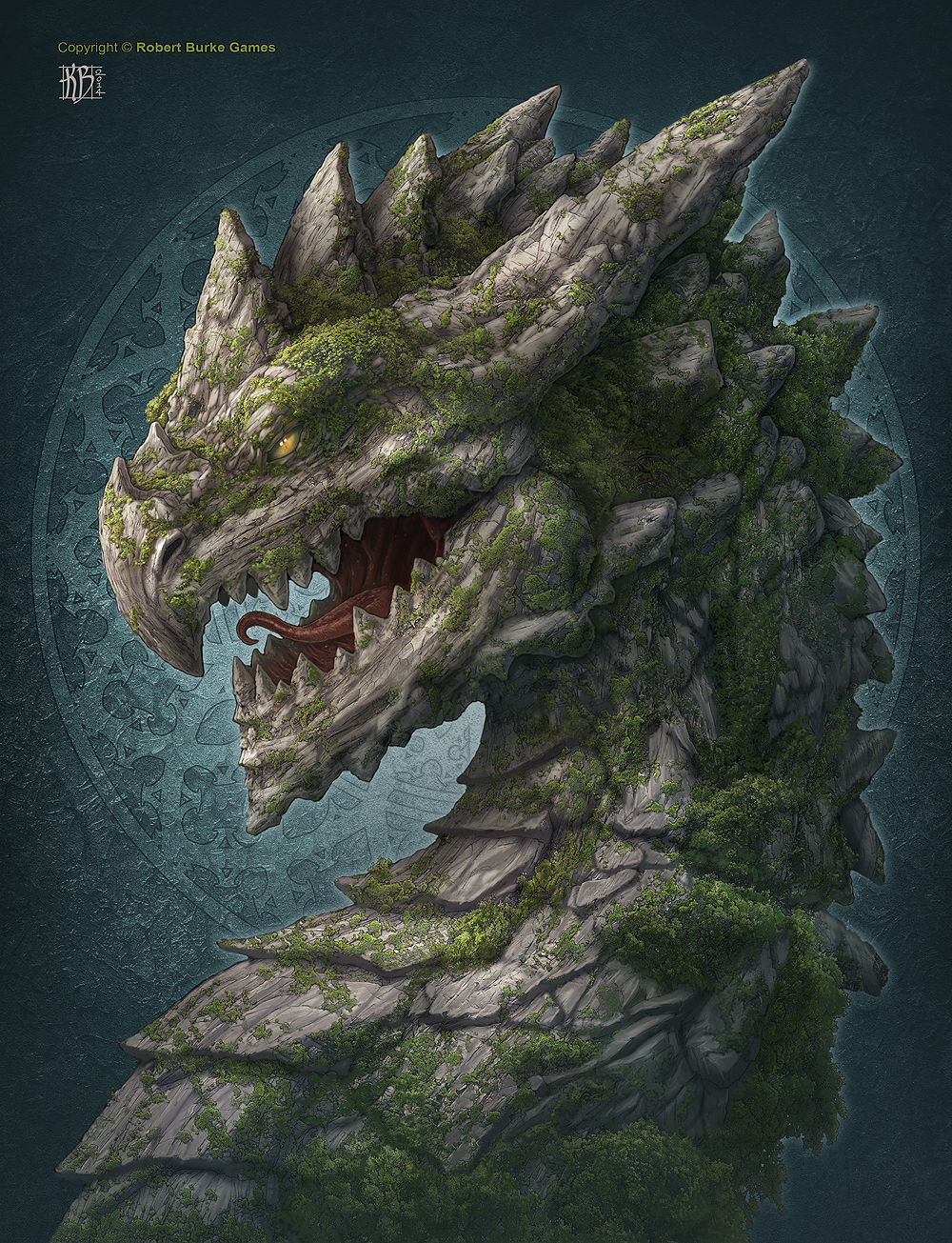 She would soon walk out from the brush, looking at the dragon in her new, strange form. "Um....Uh.... Are you ok?" Very smooth.

Muling about and strutting forward was a wise decision on Incus' part. Not paying attention and being in deep thought was not wise at all, especially with a forest full of creatures, regardless if it were the busiest part of the day and night. Incus continued his train of thought until he was interrupted by a sudden voice. He quickly looked about, his frills shooting upward out of habit until his saw who exactly called him. One of those earth dragons, maybe not the largest but still quite sizeable compared to Incus.

Gulping silently, Incus spoke in a low tone, not even noticing his sixth sense screaming at him, "Um... Hello?"

Incus then noticed his gut feeling. Something was off, something fake about the dragon, bit he kept a lid on it. He didn't want to assume the worst but he certainly didn't assume the best either. It was then Incus caught himself staring at the dragon... dragoness? He realized there was an awkward silence befalling upon the two before speaking further, clearly not used to conversation, "I- Uh... I'm fine... I guess. Just took a hard... Fall."
_______________________

Soshi didn’t know the various minor things that played into dragon express, so she couldn’t really mimic the bit of doubt she had after hearing that it was just a fall. The “dragon” would take a hesitant step forward to look at the not-quite-right looking wing. She then looked back. She didn’t mimic wings, so hopefully her own confusion would be understandable.

“Um... you wing looks.... Uh... bad....” Dang it! She was terrified right now. If this dragon found her out.... She shoved it to the back of her mind. The disguise seemed to be working right now. She shook her head a little, trying to get more relaxed.