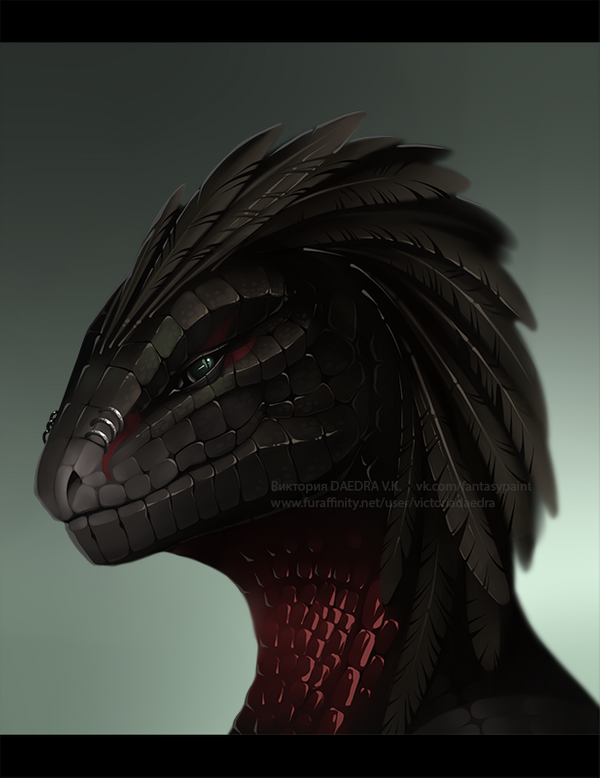 Personal Info
Name: Beek-Jin (Be-ek-shin)
Alias: Jin, Beek, Wanderer
Age: 203, but feels much older
Gender: male
Sexuality:  heterosexual
Personality:
Ambition, ruthlessness, hunger for knowledge. Three attributes that describe Beek-Jin the best. The flightless drake is driven by an inferno of ambition, always trying to surpass those around him with the means given to him, making up for what he might be lacking until no one would even think of that flaw, overlooking it completely and just seeing him as the powerful and knowledgeable dragon that he is. His ambition only knows boundaries when he views someone as an intellectual equal and no competition. Either because that someone already has a profession he is not interested in or because they do not strive for something he wants for himself.

If someone does strive for the same things as he does, maybe even competing with Beek for it, he is ruthless in overshadowing and surpassing them, often times having no problem with simply exposing of them or blackmailing them into leaving. After all he was raised to simply outmaneuver his opponents in any way possible, even if it was through their family.

However, he somehow has a soft spot for hatchlings and outcasts like him. He can grow rather caring and soft when around the youngest of the tribes or other outcasts, suddenly becoming charismatic and almost empathic. In moments like that one can truly see how much the drake loves history and knowledge. He often times reads old manuscripts to those who ask or teaches them about long lost cities and religions. If fate had set him on a different path, he might have made a good teacher.

When he finds someone outside of competition and an intellectual equal, he will become an easily excitable and motivated scholar, always ready for more research, lofty debates and interesting theories, which are most likely a few of the reasons he used to get along with Archon during his experiments. But Beek-Jin is a ruthless drake with a moral code, one he didn’t think he had until he was part of horrible experiments.

In his views most species aren’t equals to the dragons, some tribes not even being equals of the NightWings, but he did not want to see them suffer like that. With humans and monsters, he did not have a problem, but once lesser species got involved, he suddenly grew a conscience, mainly because he did not see the necessity in such cruelty.

Beek doesn’t like to flaunt his knowledge in front of dragons he deems lesser, whether it be in intellect or caste, therefore usually not seeming arrogant, even though he tends to sometimes throw in a random fact or anecdote about something that ruins this perception.

These days the drake is a loner, keeping to himself and his books most of the time. If he does meet someone he tends to be distant and cold, always suspecting them of being a threat to him. However, he has gotten a little more adventurous and daring, now that he has to hunt and somehow keep a steady stream of new readings flowing. He pretends not to be lonely, but he is a little bit and can sometimes be heard talking to his books like they are other dragons.
Fears:
-Tenebris and most Nightwings due to the danger of being found out
-Being found out in general
-Shadows creeping around
-Great Heights
-Losing his mental strength and magic
Strengths:
-Unconventional fighting and hunting methods due to being flightless
-Outsmarting his opponents
-Stealth and deception
-Versed in many, often times dead, languages
-Vast knowledge
-Photographic memory
Weaknesses:
-Flightless, therefore at a great disadvantage in combat
-Hermit with no real allies
-currently no powerful special ability
-Photographic memory
-Already addicted to magic

General Appearance
Height: 38ft, but since he stands only on his two hind legs he seems to be about 50ft or higher
Scales: Most of his scales are a deep black, with his underbelly and chin donning blood red almost metallic hues. Feathers cover parts of his head and neck, looking slightly similar to human hair
Eyes: stone grey
Appearance: Beek-Jin has no wings, due to some genetic deformity he was born flightless and has since adopted walking upright on only his hind legs, using his front paws like the hands of a human. He usually wears a long cloak with a hood masking his features completely. His head is covered with feathers and he wears sets of iron piercings around his snout, solely for aesthetic purposes and because they are supposed to relieve migraine pains. Around his neck hangs a necklace-like artifact made by the archon himself that keeps other dragons and magic users from using scrying abilities on him and keeps Tenebris from using his dream weaving on Beek.

Tribe Information and Status
Tribe: Rogue
Inheritance: Purebred Nightwing
Rank: former Grand Apothecary
Family: Most likely killed or used in some kind of twisted experiment by Tenebris to find information about Beek’s whereabouts
Mate: N/A
Hatchlings: None (unless someone is looking for an adoptive parent or so)

Skills and Abilities
Normal Abilities: Beek uses the Nightwing sleeping gas and their Night vision abilities. He can manipulate shadows to blend in with his surroundings, making him almost invisible at night or in caves
Special Abilities: Studies Magic, but can currently only use simple levitation on small objects like books, scrolls and smaller logs, making home repairs much more efficient. The spell is draining for everything heavier than two encyclopedias and impossible for anything larger and heavier than a small log of wood (about 90lbs just as a reference point). He can use levitation on small and light objects, such as books, for a duration of 15 posts and it takes only one post to recharge, if not used for the full 15 posts. For objects of a medium or heavy range, he will only be able to levitate them for 10 and 5 posts, while the the ability takes 2 and 3 posts to recharge. If the ability is used to its full duration maximum it will take 5 posts to recharge.
Combat Style: He usually avoids open battles at all costs, due to being at a huge disadvantage physically and without wings. If he does have to fight he currently relies on outsmarting his opponents with traps, hiding and his surroundings.
Background
History: Descendant of a long and mighty line of NightWing royalty, his family had always been obsessed with keeping the blood line as pure as possible, infinitely leading in deformities and genetic defects the longer their line existed. Compared to some of his cousins and distant family, Beek got “lucky” by only being born wingless but otherwise intact. Yet, his obvious weakness would forever haunt him and instill in him an ambition to grow above it, some day becoming so powerful that he would never need wings. This deformity embossing the rest of his life, giving him only one option of success in the fields deemed worthy by his family.

He was groomed for politics and science, as soon as he could walk, receiving a thorough and vast education in history, languages, politics and sciences. Being born with a photographic memory instead of flights, he found solace in the library of his parents, sometimes watching the other dragons outside with envy, but quickly burying himself in the books, being determined to not need wings to rise above them all one day.
Ambition and determination drove him through the ranks of the Apothecary, ruthlessly exposing of competition for ranks, clearing his path until he finally became Grand Apothecary of the Potentate, being almost satisfied for a while with this position.
In his early years of being part of the scholars, before becoming Grand Apothecary, Beek-Jin had begun to study the past, slowly but surely becoming obsessed with its long lost knowledge and secrets, this obsession only increased when he started being exposed and training in magic. The power this brought quickly reawakened his dream of one day rising above his wingless existence.

His proximity to and ear with the Archon gave him access to knowledge and opportunities most dragons wouldn’t dream of. He had seen more bloody messes, failed experiments and close to insane ideas from the Archon than was good for any clear mind, quietly sitting through them and reserving his judgment for later. Some of those messes he had cleaned up, exposed of the remnants, others he had been an active part of, but usually he had watched and made accounts for later use. Aside from these, it was his responsibility to go through all the books the scholars brought from long lost ruins or found during their expedition to find what might be of interest to the Archon and pass it on. It was one of these books that would change his life forever, drive him to flee from the Archon, stealing the book along with the necklace for his inquisitors, escaping from his deadly grasp and going into hiding to protect the world from the knowledge he had found and that could never get into the hands of Tenebris.

Beek-Jin fled during the day into the Rogue lands not too far from the Imperium, where he found a set of caves to hide in, making it his home over time, settling down and getting comfortable with being awake during the day instead of the night to slim his chances of getting caught by any NightWing Guardians, trackers of inquisitors. The necklace he stole protected him from Tenebris’ abilities and the scrying of others, but one could never be too careful. He acclimated well to hunting and living on his own, using his knowledge of hunter’s traps and information about humans to craft his own traps and safety nets, even making himself a bow for ease of hunting food.

Now his days are spent intercepting NightWings and other dragons coming back from their explorations, stealing a few books every time and adding them to his own personal library, researching the secrets of the past trying to unlock them before the archon could, hopefully stopping him one day.
RP Sample: See Helia and Àlamei for a general idea
Picture Source: https://www.deviantart.com/victoriadaedra/art/Commission-Argonian-711097403
______
He is supposed to replace Merakeen on this account, as I haven't really been able to connect with her as a character and therefore haven't found much muse to actually play her

Is there a limit on how many times they can use the levitation ability? And how long can they use it for?
_______________________
Bassasail, SeaWing Guardian
Attor, Starlight Sovereign
Gemna, The Last IceWing Scholar
Ragnarok, EarthWing Adviser
Abbadon, Hildrhilts Hatchling
Incus, Demigod of Fire
Malek, EarthWing Scout
____________

Edited the limitations for the levitation ability (hope it isn't super confusing)
Also removed the part about being able to use a bow and therefore edited the combat style portion
_______________________
My alts:
Àlamei the Firewing Guardian (FW/SkW)
Helia the Lightwing Schola (Pure LW)