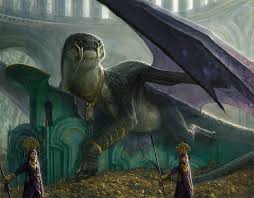 (ignore the humans)
Type of Character: Dragon
Personal Info
Name: Sulgar
Alias: None so far
Age: Adult; in human terms he is 349 years old
Gender: Male
Sexuality: Heterosexual
Personality:
Sulgar is a very complicated dragon. He is tempered and yet ruthless, even caring and cruel, yet still truly has the interests of the tribe first.
Firstly, his tempered ruthlessness. Sulgar wants nothing less than climbing the social ladder of the Earthwings. He wants to be by the side of the King, either advising him or functioning as a lieutenant. However, this ruthless attitude has a balance; he has no intention of the throne. While he does not agree with all of the current King's worldviews, he does respect him as a leader, and to him that is grounds enough for his loyalty. In addition, he places value upon material wealth. While much of his hoard was lost when the Monsterlypse occurred, he has managed to keep a pile in his new quarters, which he may be found lounging upon.
Sulgar has a rather unique view upon Earthwing purity. He views hybrids as deviations from Earthwing purity, yet at the same time doesn't outright hate any of those innately. While he does not see them as equal to purebred Earthwings such as himself, for those in the tribe they are neither loathed nor discriminated against by him. This only applies to hybrids that ally themselves with the Earthwings, however; those who have noticeable amounts of Earthwing blood and yet have nothing to do with them are in contempt in his opinion, worth almost as little as the dirt they trod upon. He does not declare this openly, but knows the King allows them their private opinions and so respects that rule; while in the presence of other dragons, Sulgar will treat them at least passively, or perhaps slightly impassive.
Sulgar deeply cares about his fellow Earthwings, to the point he feels they are family. Despite this he also acknowledges the fact that there is a ranking system in place; some dragons are just more important than others, so while it may hurt he would rather save the most useful dragon in a situation where he had to choose. Hatchlings and young ones are an exception; while they may not be innately useful at the moment it is not their fault. If faced a choice where he had to save a very important healer or a hatchling, it would certainly cause much stress for the large dragon.
Fears: After a brief childhood encounter with one, Sulgar is now very much afraid of manticores. He also fears the massive Wolves that have appeared, and this fear can sometimes mean attacks of paranoia in which case everything becomes suspicious and no one can be trusted.
Strengths: Thanks to his magical talents, Sulgar is a very proficient stone and metal worker. If he wanted to he could become a blacksmith, but he feels his duties are in a more advanced position. In addition, he has learned the basics of swimming. While quite capable physically, he is by no means the strongest of the tribe, but his size makes him at least moderately strong. Sulgar is much more proficient in mental acumen, preferring to be the tactical mind behind a fight rather than being in one.
Weaknesses: Water magic is a potent weapon against him, disabling his breath weapon and poison. In addition if he is submerged in water, or at least his head, he cannot use these abilities either. His golem's weaknesses will be discussed later.

General Appearance
Height: 100 feet tall
Scales: A combination of a deep earthy blue designed like a snake/crocodile hybrid, with a pale underbelly
Eyes: Light blue
Appearance: Sulgar wears several golden adornments; an anklet, a necklace with golden globes, and a gold chain attached to the left side of his face and to his back.

Tribe Information and Status
Tribe: Earthwing
Inheritance: Pureblooded
Rank: Currently upper class Citizen, looking for the position of Adviser
Family: Sulgar's mother was alive up until the Monsterlypse, when she was lost and presumed dead.
Mate: Also lost in the Monsterlypse, although she and Sulgar had become distant prior to her death
Hatchlings: N/A

Skills and Abilities
Normal Abilities: He has the standard set of Earthwing abilities, but as with many Earthwings he had his own spin upon such capabilities. He is immune to poison and has an earthquake roar as normal.
His venom is a tar-like substance that induces extreme pain and prevents blood clotting. This cannot kill in itself, but if it gets into an acid-based wound it makes infection almost certain unless magical healing is applied. He can choose to drool it out for application to weapons, if he so desires. This is delivered by biting attacks. NightWings are the only ones with good night vision, so if you want to keep that for Sulgar, you're going to have to give him NightWing heritage, which means you'll have adjust his abilities accordingly.

On to his abilities. Is this poison secreted through the skin, expelled through the mouth, or injected by a bite? This needs to be clarified. If it is the latter, that would make it a venom, not a poison.

With his acid, you say direct contact or prolonged exposure will cause acid burns and be very painful, but low amounts of the acid won't really do anything.. How much is a low amount?

How long can Sulgar use his golem before his magical energy is used up? Also, how big is the golem, and how strong? As strong as a dragon doesn't say much because it varies among species, with EarthWings being the strongest.
_______________________
Astral's favorite person. ^.^