Personal Info
Species: Griffon (purebred)
Name: Kulden
Alias: Several hatchlings have referred to him as the "fluffy bird"
Age: 27
Gender: Male
Sexuality: Heterosexual
Personality:
Kulden is a very easygoing being, almost to the point of naivete. He still acknowledges that the world is dangerous, and that the monsters roaming the world cannot be reasoned with. With dragons and other lesser species, however, Kulden often approaches them for at the very least a brief chat. If battle is even threatened at, he will flee.
To say Kulden is a social nomad is to describe him perfectly. He never stays long in one place, at least no more than several months. He feels that there is always a new face to meet, and is even known to approach humans.
The griffon has a special soft spot for young creatures that are not yet adults, sometimes sticking around a befriended small for several weeks before moving on. In the case of some of the orphans he had found in his travels, he often travels with them for long stretches, acting as a foster parent before he tries to find them a proper home. This can be from a human camp to leaving it outside a dragon's home, his faith in those beings to good assuring him he found a nice home for them.
Fears: Kulden fears loneliness above all else, and awkwardness even more. He avoids both of these as best as he is able, hence his wanderings. He also fears being hurt to the point of being unable to fly for more than a month, sure that he would go crazy if such a thing happened.
Strengths: Kulden is an extremely perceptive being, his mixture of animals lending him several perceptive abilities. His owl heritage makes his flight silent, as his feathers and hairs have invisible hooks on the end of them, like a normal owl. In addition, his eyes can see perfectly even in complete blackness or through fog and snow. This is due to his combined nature; from his snowcat heritage he also has keen smell and keen hearing from his owl side.
Other than this, he is a very able navigator. He has traveled much of Pyrria in the land of the Twilight Imperium and can navigate easily through the lands there he has traveled before. This often helps due to the navigation equipment a friend of his gifted him after he assisted him in fighting off a pack of Skier.
Weaknesses: Kulden is very trusting, and often will take things at face value. He believes everyone can be talked to easily, and unless explicitly asked to keep something a secret he might bring it up when talking to another being. This often means he meets hostile humans or dragons, sometimes even manticores. In addition, he cannot stand dry heat and will often refuse to enter places with it; if in climes with the current temperature over eighty degrees, he loses his ice ability and his usual stamina is quickly sapped in such conditions.

General Appearance
Height: 47 feet tall
Feathers: White, fur is patterned like a snow leopard
Eyes: Yellow
Appearance: Kulden wears a small satchel filled with his navigation supplies as well as a small necklace with a crystal gifted to him by a fellow nomad.

Skills and Abilities
Special Abilities: Other than his innate resistance to ice magic granted to him by his griffon heritage, Kulden has one special ability he calls his Frostcreep. This ability, when activated, freezes his claws and infuses them with a special spell that inflicts a very interesting curse upon those hit by it. This curse takes a minute to reach its peak, targeting wings first to ensure Kulden will be able to escape. In no way does this sharpen his claws, and can be shattered or melted like normal ice. The curse causes stiffening of the joints and frost to creep over the victim, though this ability cannot kill and is designed to make an enemy slow enough for Kulden to escape.
Combat Style: He'd rather not, but will usually claw someone once with his creep frost before retreating.

Background
History:
Kulden grew up like most griffins do; in a nest surrounded by siblings before heading out on their own. He has always been friendly, a trait his parents worried about but otherwise didn't much care. When he was first set loose to fledge, he traveled very far away before coming back. Of course as per griffon custom he was driven away, as his parents wanted him to seek either a pride or his own territory.

Choosing neither, the young griffon set out into the world. He began exploring the lands of the Twilight Imperium, befriending Guardians he met and happily interacting with various dragons. Other than these travels, of which he often will retell to those who care to listen, he has very little history to him. 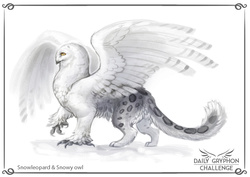 Full effect would take about a minute to reach, but the wings are generally targeted first by the curse to make sure he gets away.