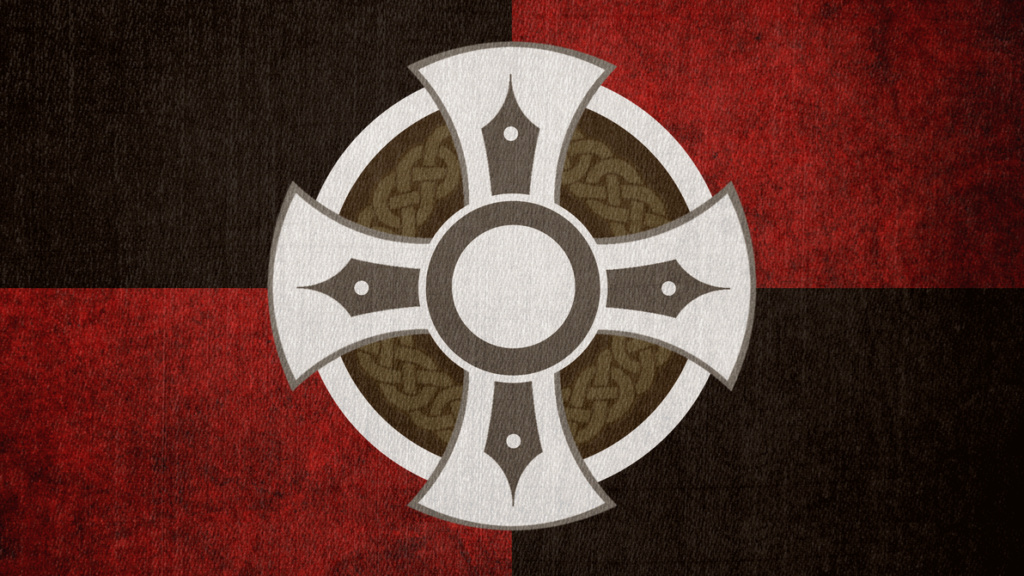 "Certainly there are conflicting views about the Northmen. On the one hand, they are merchants and tradesmen, interested in dealing fairly with their neighbors. But on the other hand, they are fierce and bellicose people who raid and steal as they like, extorting gold and silver for not sacking our coastal communites. The reason for this somewhat contradictory nature is that Skaldgarde, while unified under their King in times of war are not a unified people as a whole, but rather consist of several tribes. And their attitudes differ a great deal between each tribe under their respected Jarls. To comprehend the Skaldgarde character, one must first understand who they are, where they live, and the fundamental motivations of these Northmen."
-  Lord Benedict Surland, Leostonnian Scholar.
Skaldgarde, commonly referred to as the Skaldgarde Isles or the Isles of Skaldgarde, is an archipelago and one of the few Human Kingdoms of Pyyria. A group of five relatively small Islands, situated off the eastern coast of the Icewing territories and North East of the Kingdom of Leostonnia. It’s legendary, famous for the unrivaled corsairs and swift longships that sail the Seas throughout Pyyria. Its people are united under the King of the Skaldgarde Isles, who's elected by the jarls of the five major clans during traditional moots. In practice, however, the kings are from the same clan or at least related. Inhabited by such a race of savage and ferocious Humans, fur-clad warriors and berserkers of hairy brawn who sail the seas in their fearsome longships in order to unleash their devastating fury upon those they consider weak. Warlike and cruel, the Skaldgarde are the very epitome of warriors.

The men of Skaldegarde are reckoned to be perhaps the most adept sailors and navigators out of all Human collectives in the known world, unequaled by any in their courage and reckless thirst for conquest. The Northmen are, without exception, great warriors, blessed with incredible strength at arms and fearsome demeanours. The Skaldgarde Isles are a savage and brutal land, plagued by lethal winters for more than half the year, and worse, lashed perpetually by raging gales from the harsh coastal winds and seas of the North. For the most part it is a frozen boreal wasteland bereft of all trappings of civilisation and few crops grow there, for the land is hard as iron and the howling winds cut like daggers of purest cold. To this end the Skaldegarde have a culture around wale hunting and fishing however for this scarcity many more of the Northmen have learned to spurn the sickle and ploughshare, instead deigning to take what they need to survive from the lands of weaker men with the axe and sword.

It is a grim, cold land where the weak do not live long, and where living means a constant fight for survival, supremacy, and the chance to appease ancient primal savage gods. Honoured above all is the virtue of strength, the young Tribesmen of the Skaldegarde go forth ever seeking to earn glory and fame so that their names will live on in song. Brutally, it is common despite the wishes of the Skaldegarde King that the tribes will often fight amongst and raid one another in times of dispute. Their desire for glory and renown leads the Skaldegarde to fight the most fearsome of beasts through Pyyria, from atop War Mammoths and their Longships the Skaldegarde have come to build their infernal engines of war, ballista and trebuchets upon both ship and beast to attack Dragons and Monsters alike.

The Seas themselves around Skaldgarde are prowled by the fearsome black longships crewed by barbarians and mastered by the terrible champions and heroes of the Isles who reave and raid as they will, bringing bloody battle to any ship cursed with the misfortune of crossing them. From the ports and fjords of Skaldgarde do the terrible raiders sail, harbouring cargoes of bloodthirsty marauders intent on putting many to fire and blade. Moreover, the icy cold of the Sea surrounding the Isles itself is as much a bane to any than the inhabitants of this cruel land who call it home, with winds so cold they freeze the very spray, causing knives of front to pierce the flesh and freeze extremities. Hence why it is little wonder while these Isles breed such hard savage Humans as they do.

Harsh lands breed harsh folk, and the Northmen have been moulded into some of the fiercest and most violent warriors to blight the world. A race of ferocious raiders who must kill and plunder in order to survive. However, during the summer months, the air warms just enough to enliven the sparse stretches of land suitable for farming, which serves to supplement the Skaldgarde common diet of fish, bear-flesh and the meat of the far less savoury creatures that prowl the wilderness. All other months, however, the land is deathly cold, and unnatural snow-storms are a constant.

In Skaldgarde culture those found guilty of cowardice, abandoning their kinsmen in the midst of battle or fleeing from a fray, with no scars to be found on their bodies, are stripped naked, tied to the village gallows, and doused with water. By the next day, such criminals are frozen so solid that not even the ravens can make a meal of them. Throughout the Isles the there are no stone castles or citadels, but instead greathalls and wooden palisades what dot the harsh land being home to the various tribes. Even the King has no official palace or capital, as the holdings of the King will often pass whenever the moot selects a new Clan Jarl to lead the Skaldgarde.

Throughout the Isles are raised Monoliths what show runic inscriptions in the Skaldgarde tongue written clearly upon them. These inscriptions often foretell the sagas of the great heroes of the Skaldgarde people, along with burial mounds which house the treasures of long dead champions what have been buried with their formidable wealth usually obtained through reaving and pillage. Monoliths are most often raised with stone, but can also be composed of more esoteric material as a result of the Skaldgarde’s qualities. Bone, bloody flesh, marble, precious gems, and so on are all examples of materials these Monoliths may be composed of which held in an ever holy regard as though temples of other faiths.