Arkay, Son of Sky and Light

Arkay, Son of Sky and Light

Type of Character: Dragon
Link to Character List Page:  https://www.rpgdragons.org/t4862-rylatha-s-characters
Personal Info
Name: Arkay
Alias: Ark, Feather Blue, Little Blue
Age: Newborn
Gender: Male
Sexuality: Pansexual
Personality: Arkay is a rather standoffish hatchling. He is prideful and thinks quite highly of himself. He is an introvert and prefers to be alone, but he is fond of his family. They're the only ones he is carefree and happy around. However, around others, Arkay can be rude and snarky which gets him in trouble.
Fears:
♤Monsters
♤Water
♤Being alone
Strengths:
♤Like all SkyWings, Arkay is very fast. However, he can't go as fast as a purebred due to his LightWing heritage. Now he can fly 40 MPH, but as an adult his full speed is 105 MPH.
♤Because of his coloring, Arkay can blend in well with a perfectly blue sky and the dark abyss above at night.
♤Due to his thick fur, Arkay can handle cold temperatures quite well.
Weaknesses:
♤Arkay is quite clumsy. He can never seem to stay on his feet.
♤Arkay is very tiny. Any dragon can kick him around with ease, and he won't be able to do anything about it.
♤Thanks to his fur, Arkay overheats too easily. He doesn't too well in hot environments.

General Appearance
Height: 6 feet
Fur and Feathers: Varying shades of blue and white, with some black as well
Eyes: A striking yellow
Appearance: Arkay has the slim, almost-serpentine shape of his mother and the coloring of his father. He has a long, slender body covered in a furry coat of white and blue and long, huge feathery wings. He has wings so large that they drag on the ground as he walks. Arkay has a long, thin snout that resembles a wolf's muzzle and a furry white mane that goes down the back his neck. He has a very long tail which is even longer than his body length which is shaped like a snow leopard's tail. His primary color is a sky-blue with a white underbelly, and at the ridge of his spine along his neck and back (not his tail) has navy blue to black fur. Along his body are vibrant neon stripes that change color according to his emotions. Arkay's wings start out as black then slowly fade to blue then to white. When he's older he will be a very attractive male.

Skills and Abilities
Normal Abilities:
♤Arkay has the ability to breathe lightning from his maw. He is a hatchling, so it is not very effective. It can travel as far as 5 feet and can only cause one degree burns. He can use this once every two posts.
♤He can also cause a tiny gust of wind from flapping his wings. Right now it can do nothing but snap twigs.
Special Abilities:
♤None at the moment.
Combat Style: Rawr! Look at my tiny sharp teeth! No? You're not afraid? Um.... Mommy!!! Daddy!!! Help!

Background
History: Arkay was hatched to Destella and Snowscale. The rest of his history is yet to occur. 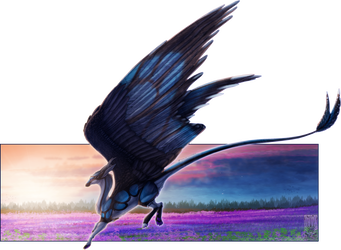 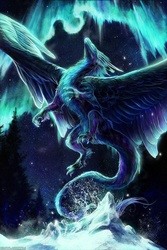