Lilith was three years old now and had been searching for the home of her past body ever since she hatched. It was very hard, as Lilith had forgotten to fly. It was because of this she travelled on foot, which proved to be a very long, painstaking journey.

But she was close. She could feel it.

The SkyWing paused to look at her wings. This would go by much faster if she could fly. . . She leapt in the air with a great beat of her wings. The hatchling flapped her wings desperately, but she must have been doing something wrong because she landed with an oof! snout-first into the dirt. 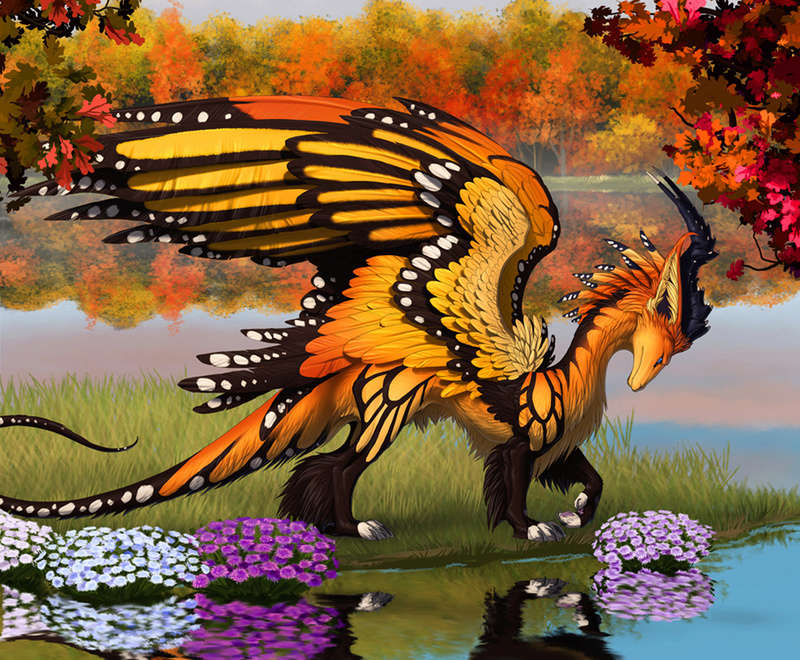 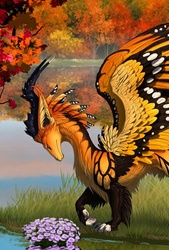 Walking along the forest floor was a male dragon. Having to be pretty large and wings that can easily shade a good amount of the ground below him.
As large as he was, the trees and the sky could easily tower over him.

Well, unless he just flies. But that isn't part of where he was heading towards in the first place.

Anywho, the male kept going forwards, following a small stone path. He then picked something up, causing him to stop for a moment.
He sensed small vibrations on the ground, and they were near.

He then heard a small voice, his snout pointing towards the sound.
Ruin decided to follow the noise, being careful of where he placed his talons at. For a big dragon, he was really careful and surprisingly gentle. He created calm stomps at every step he took.

Who knows? This might be the key to what he was looking for.

Vilkas was a few paces behind the older EarthWing, currently in his mutant form. His uncle had stressed the importance of not traveling alone. It didn't stop the Survivors from venturing out alone, anyway. But the difference between Vilkas and the others was he had permission to go alone; his demi god power allowed him to be able to do so. The young half-FireWing sighed a bit. "What are you doing?" he asked when he noticed the other EarthWing practically trying to tiptoe. "We're supposed to be looking for potential bases on this trip." The King had sent out parties to look for areas that could sustain the Survivors, then mark it and determine how many high threat level monsters occupied it.

As the little SkyWing kept forth she began feeling vibrations in the earth under her feet. She stopped, pricking her furry orange ears and listening closely. Was that. . . footsteps? Her curiosity peaked, Lilith broke into a swift trot towards the sound. In a high-pitched voice, "Baldirak? Brother? Could that be you?"

Now in a full sprint, Lilith stumbled into the coverage of the forest and was practically almost stomped on by the gentle EarthWing. The hatchling flared her wings open with a squeak of surprise, diving right out of the way of the giant dragon's foot. Fluttering her wings, Lilith glared up at the EarthWing with a hiss. "Hey, watch it! Your honking great claws almost squashed me!" While she was agitated, Lilith knew that was her fault for rushing foolishly towards the sounds of a dragon she didn't know in hopes it could be her brother. "I know I'm a little SkyWing, but I need to get to my brother. Do you--? Oh!!"

Piercing blue eyes fell on Vilkas. Lilith's heart suddenly rose and starting thumping. "Vilkas!" Her wings bat happily as she trilled. You're alive! And okay!" Though he was in his mutant form and quite dangerous, Lilith purred and bounced to her son, circling him happily.
_______________________

Vilkas had no idea how to respond to what he just heard. Not yet, anyway. Actually, he wasn't entirely sure he had heard it right. Had this tiny Hatchling just spoken his name? This tiny Hatchling whom he'd never met before? And the demigod was most puzzled by what she said after. 'You're alive! And okay!'... Yes, he was alive... But why should that matter to this tiny Hatchling he didn't know? And then she started bouncing around him. "...Uh.... Yes, I'm alive..."

And then something occurred to Vilkas. He was in his mutant form. No stranger could possibly know that he wasn't actually a monster, let alone his name. "..How do you know me?"

Suddenly Lilith deflated. Oh... Yeah, that's right. He doesn't know me... She perked back up. Yet!

"Yeah. . . Sorry, I forgot you wouldn't know me. In this form, anyway." She spread her wings and trotted elegantly in a circle, letting Vilkas look at her new SkyWing body. Lilith then frowned and sat down. How was she supposed to break this, exactly? What if he didn't believe her? I must make him believe me. I must!

The demi-god raised his club and brought down to the earth with a snarl. "My mother is dead!"

Lilith sensed vibrations in the earth. . . Another dragon was near. It'll be fine. I can deal with them later. The most important thing now is my son. She leapt back with a squeak when Vilkas brought down his club, causing the hatchling to cover her face with her wings in terror. She was tiny, so Vilkas could easily kill her if he wanted to. The SkyWing growled and glared up at him.

"Vilkas, you know better than to snarl at your mother." She held her glare with piercing blue eyes before sighing and stepping forth. "I'm sorry, honey. I know you. Let me prove it." Lilith took a deep breath then looked at her son with a tilted head. "You were hatched near a volcano in the FireWing territory in honor of your deceased father, Vyur. You were hatched in a batch of four: Amadeus, Evaleen, Tangromaven, and yourself. Your sister Tangromaven sadly passed on, but she will always be in our hearts. I am sorry for leaving you. . . For dying like I did. I could have stopped it from happening, but I didn't. I thought I was a burden. . . Well." Her face dropped. "I was, blind and all. But this is a new chapter. If you will not believe me, I will ask you to take me to your uncle Baldirak-- my brother. That is, if he will accept me."
_______________________

Smoke billowed from Vilkas' nostrils and slightly opened maw. He was ready to strike again when the tiny Hatchling started speaking things no one could have known. No one, except his uncle... and mother. "...Mother?" The demigod shifted back to his normal self. He laid down and lowered his head to get a better look a the Hatchling. "It is you... I'm sorry, Mother.. You're really back? But how?"