The Ranks of the IceWings

The Ranks of the IceWings

While the other Tribes of Pyyria function as monarchies (aside from the NightWings), the IceWings have a different system of government. The IceWings now act as a wolf pack, with various high ranks which are available to claim.

Each dragon of the IceWings is considered family but respect for higher ranks is still mandatory.

The Alpha is the highest rank of the IceWings, as it is the dragon who holds absolute control over the rest of the Tribe. The Alpha is responsible for keeping the IceWings in order and under control and will go any measure to be sure the Tribe is not disturbed. Keeping things on a strict basis is the Alpha's way of showing that he cares for each dragon of the Tribe. He is very persistent on rules, and anyone who breaks one will never be free of consequence.

Sometimes the Alpha might take on a mate who will assume the same responsibilities as their partner.

The Betas are the second highest ranks just below the Alpha. When the Alpha is absent, it is the responsibility of the Betas to keep the Tribe safe and under control. Any special problems that occur will be reported to the Alpha upon his or her return. In times of prolonged absence from the Alpha, Betas deserve the same respect that the Alpha would receive.

There are three Betas, each who control a specific part of the Tribe.

The Beta of Safety is in charge of making sure the Tribe is healthy and pure of sickness and that the Healers have enough materials in case of emergency. They are the ones who will protect the Tribe in case of plague. They also uphold the law and make sure no rules are broken, and if they are, it will be reported to the Alpha. This Beta is purely for the safety of the Tribe within the grasp of the supreme Alpha, for even the tightest holds can be weakened.

The Beta of Strength is much like the Beta of Safety but they are in charge of the military force instead. They prowl the open lands outside of the IceWing civilizations to combat monsters and intruders. They recruit the strongest, fiercest dragons to join their ranks. This Beta is also in charge of the hunting and must be sure that no outlander will be stealing their prey.

The Beta of Secrets is in charge of the more mysterious side of the Tribe. This Beta is the leader of spies and secret agents for scouting into unknown lands for special equipment and even treasure. In times of war, the Beta might send spies to the enemy Tribe to collect information on their adversaries. Most agents in this field are not IceWings or are at least hybrids.

Deltas are like Guardians but are considered stronger and more powerful. They are elite fighters tasked to defend the Betas and the Alpha, considered the best warriors in the Tribe. They have some power over lower ranks such as directing them where to hunt or where to patrol but will be powerless if the Alpha or Betas say otherwise.

Omegas are the lowest ranks aside from Hatchlings as they hold no power over anyone else other than the young, but they are still very important parts of the Tribe. The Omegas live in the hatcheries and are tasked with watching over draglets and teaching them the IceWing ways to hunt, fight, and live. There are only two Omegas, a male and a female, and although they are not the highest rankers in the Tribe, they are still very important as the future of the IceWings rest in their claws. 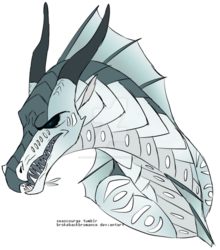 If you are interested in having a high rank (Beta) in the IceWings, please fill the form below. To have a high rank you must be either an IceWing, SeaWing, or hybrid. It is preferred you are active as well.

Name: (What is the name of the character you would like to use for this position? Please provide a link to your character as well.)
Rank: (Which Beta would you like to be?)
Why will your character be good at this rank?:
Activity: (How active are you? Applies for both site and Discord server.)

Name: Snowblaze
Rank: Beta of Strength
Why will your character be good at this rank?: Snowblaze has been a Guardian for most of her adult, and had a great grasp on fighting. Her mind may be a bit... abnormal at times, but this odd dragoness tends to have a good head on her shoulders.
Activity: Very
_______________________ 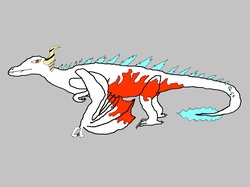 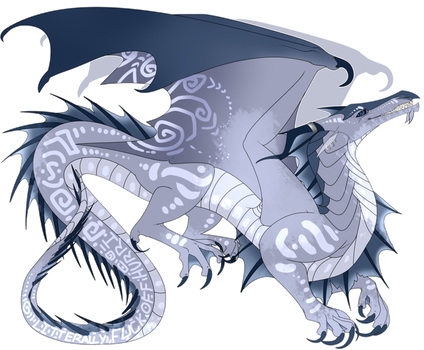 Why might Soulcry be a good candidate for the role?

Soul is an adaptable, powerful dragon with keen vision.  His inheretence falls under the right criteria with 10% nw, 10% lw, 10% iw, and 70% skywing

As a rouge he had been quite secret and isolate in his years apart from the skywings, and though he just joined the ttibe recently, he has an incredibly loyal personality, ready to devote to the IW tribe.  He has a dominently mysterious aspect of personality, has a keen awareness and intuition.  He is small and lightweight, therefore able to keep covert and silent, and in fact even transparent, white body for quality calmoflauge in the snow.  He has good leadership skills, and can evade danger with great speed.  This dragon is very adept with vision with an intellect that is very high and has a vision ability especially equipped for this perfect role which allows him to long range see through objects.

He has been rogue for many years which may also be suitable for the candidacy.

Activity: because my meds have made me feel very weary, i havent been active much lately. But i have recently began a new one to help me sleep better at night.
I have been meaning to be much more active, but now i feel like i actually can.

I'm currently working on the app of Xajiva and I'm pretty sure that - since she is my first character on this site - it would be too much to apply her as Beta of Safety. She is very protective, so the rank would have worked well with her, but Deltas would work well too. Would it be fine if I claim a Delta rank ...?