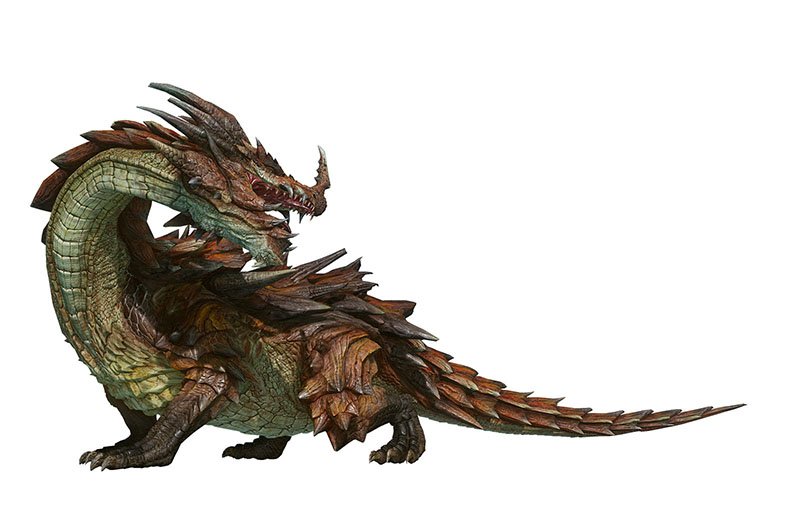 Lao-Shan Lung, Monster Hunter
Type of Character: Dragon
Link to Character List Page: https://www.rpgdragons.org/t5380-sicarius-s-character-list#65855
Personal Info
Name: Moh'ran
Alias: Old Mountain
Age: 1576
Gender: Male
Sexuality: Heterosexual
Personality: Being a small mountain of scales and teeth, you might expect Moh'ran to be mildly aggressive, but in reality his capacity to care or even notice most of anything around him is next to none. Moh'ran will move where he wants to move, not particularly caring about what happens along the way and only seeming to be aware of what is around him if he is directly confronted - but even in that case, it's very likely he won't care anyway. In terms of an actual social interaction, Moh'ran is what you'd refer to as "that wise old guy over there". With the amount of time he's lived, it shouldn't come as much of a surprise that he knows many, many things, and is essentially a walking encyclopedia of knowledge. Despite all of this, he prefers to be alone.

A note for the inevitable question of how he sustains himself: Moh'ran consumes ores as his primary diet and yes, that does in fact mean he will eat his way through mountains given enough time. He can digest meat, but the amount he would need is obscene, and so he sticks to good 'ol rocks.

Fears: Considering his mass, the only thing he honestly has the capacity to fear is literally dying. What brings him to that point is debatable in how scary he finds it.
Strengths: Obviously mentally strong in terms of knowledge, he knows a lot about almost everything. In terms of physical strength, it's once again very obvious considering his massive size. Despite that, however, throwing his weight around is his main form of offense. Despite that, he is very effective at doing so. Moh'ran's roar is extremely powerful, and the force created by it is enough to cause landslides, topple constructs, and blow back smaller animals. Moh'ran's carapace is extremely tough, and even his underbelly is difficult to get through by lighter tooth and claw due to the mass of rocks covering it. He is, quite literally, a walking mountain.
Moh'ran has the relative strength of an ant. What that means is he is able to carry many, many times his weight.
Weaknesses: Despite his knowledge, Moh'ran proves to be very straightforward in intelligence, and plans. He has no tactics, no strategies, his battle plan is reacting to the situation with no prior thought. He is also slow whilst walking, and his capacity to hit something moving fast or flying above him is practically non-existent. If you can outmaneuver him, then there's really nothing he can do - and outmaneuvering Moh'ran is quite possibly the easiest thing possible. Due to his extremely tough carapace, when Moh'ran is attacked he most likely will not attempt to fight whatever is attacking him. The energy he has to expend on attacking isn't worth it, considering he could instead just keep walking in hopes that the aggressor simply gives up. While this isn't really a weakness, it is worth noting that often times he will simply refuse combat.
Despite being nigh impenetrable above, larger dragons will have a much easier time breaking through his armor. Moh'ran's scales themselves aren't necessarily much tougher than an average dragon - it's the fact that they are coated in rocks that makes him so hard to get at. His underbelly, while yes covered in hardened rock armor, is still easy to get at. Any dragon with the capacity to remove a rock from his stomach can get through it, as most of his underbelly shell is comprised of pebbles brushed from the ground. Moh'ran's walking speed is relatively as fast as a turtle, and so as well as not actually trying to fight, he is also basically incapable of running away.

General Appearance
Height: 150 ft tall, 345 ft long.
Scales: Pale red carapace, with a beige underbelly.
Eyes: Yellow
Appearance: Moh'ran is an absolutely massive, wingless dragon. Over the course of his thousand years of life, his body has absorbed the minerals in the air around him, tinting his scales red and beige. Definitely an intimidating sight at first, Moh'ran is capable of both quadrupedal and bipedal movement. He sports a very large horn on his snout, one which, provided the force that his mass provides, can penetrate essentially anything.

What you probably didn't notice is that the massive scales adorning Moh'ran's body are actually volcanic rocks, hardened to a nigh impenetrable degree. These rocks are fused both to Moh'ran, and to each other, creating what is essentially a shell around him. Moh'ran's actual height may only be a few feet over one hundred, or he may be a good deal over one hundred, he may even be simply one hundred feet tall, but the partially jagged, partially smooth rocks that have enveloped his body make it impossible to tell.

Skills and Abilities
Special Abilities: You may be wondering how the rocks fused to Moh'ran and themselves, and you are definitely wondering how he can carry it all in the first place. As stated, Moh'ran's ability to carry things heavier than himself is outstanding, most likely due to the immense strength his body already needs to move something like himself. The reason for that is what his specific lineage of species does for protection.
Moh'ran's body secretes a special, quickly hardening liquid that acts like obscenely powerful glue, and it can quite literally stop dead the momentum of large rocks falling onto him through gravity. Can you see where this is going?
Moh'ran himself has more of a volcanic taste, and so when he eats his way through dormant volcanoes or, otherwise, regular mountains, rocks tend to fall on him. His body reactively produces the liquid and catches the rocks, and while he makes his way through, they are either cut to his form by being brushed off by other rocks, or he makes a conscious effort to carve them into his shape by rubbing against walls, etc. What that means is that every time he eats, he progressively gains more and more armor.
Moh'ran has had his particular coating for a rather long time, a few hundred years for sure, and through multiple bouts of secreting liquid, his rocky carapace has basically melted together to both fuse with him and itself, creating a solid, sturdy shell. His underbelly, when brushing with the ground, also secretes the same liquid and picks up smaller rocks in excess, creating a less solid but definitely prevalent shield underneath of him as well. His legs touch walls of mountains or caves he creates and are also covered with rubble; every inch of his body has a thick layer of molten rock fused to it, turning him into an unbreakable bastion of utter devastation to whatever happens to be directly in his way. Others of his lineage take on shells of normal rock, crystals, ores, trees, and some even have a coat of pure gold.

Moh'ran's shell weighs approximately the same as a couple of small houses, rounding out to about two hundred thousand pounds.


Combat Style: The danger of Moh'ran doesn't come from his horns or his roar, but instead his presence. Just existing at a given place means he's going to plow through trees, villages, and trample entire ecosystems in his slow, straight path to wherever he's trying to go. Assuming he is actually trying to fight, though, most of his "style" is comprised of crushing, stepping, and squishing. If you can't avoid his slow attacks, you're going to be in for a very, very bad time. If you can, then you're basically just going to bully him until he waltzes away.

Background
History: Moh'ran's life was much like it is right now: he waltzes from one destination to the next, seeing the world, and learning new things when he decides to actually pay attention. His parents could possibly be dead, but if not then they are older and even larger than he is. Due to his size and overall lack of caring, there have been no tragic or otherwise notable events in his life. He is, quite simply, a walking natural disaster.
RP Sample: 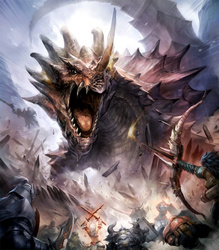 The max height for EarthWings is 100ft. The only exception to this is characters made before the new height restrictions were made or offspring of those characters.

Next, there's nothing wrong with his special ability allowing him to gather rocks onto himself to form armor, but he shouldn't be nearly impervious to damage, which he is as you've stated that "even his underbelly is nigh impenetrable by tooth and claw". In fact, you've made him so physically tough--and without his special ability--that he just ignores whatever is attacking him. The only real weakness he has is that he moves too slowly to bother fighting because it would take up too much energy.

At the moment, you have a dragon who is too physically strong to fight and, on top of this, has a special ability that makes it even more impossible to beat him because he can cover his entire body in rocks.

So what you need to fix is his height and his strengths and weaknesses, especially the latter. The one physical weakness all dragons should have is their underbelly. Because of his special ability, he should be physically weaker overall so him having the ability he has makes more sense.
_______________________
Astral's favorite person. ^.^