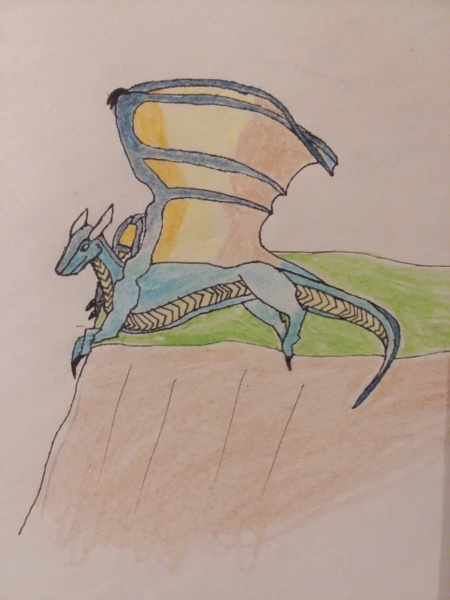 Type of Character: Dragon
Link to Character List Page: N/A
Personal Info
Name: Leyonta
Alias: The casual Treasure Seeker, Leya
Age: 1,645 years
Gender: Female
Sexuality: Heterosexual
Personality: Leyonta is the kind of dragoness that is likely to take risks in hopes of obtaining a highly improbable outcome. She looks at the world differently than most, and where they see nothing but choas and regular ocurrence, she sees rhythm and pattern. Because of this, others think she acts rather strange and she will in turn mock them for not seeing what she sees, before trying to explain to them what that is. This makes her outspoken and firm overall, but she will still recognize if she is angering or hurting someone with her words and will be more sincere. She's cynical and a little self-centered but she does have a kind heart, and wants to push past the bad sides of her personality. She is still fairly friendly and upbeat most of the time, when she isn't show-boating her philosophies and likes to have close friends she can rely on for helping her not be as rude. Actual physical confrontation with other dragons is something she really tends to shy away from, and will simply walk away or run if need be from a fight. She has a certain way of winning over others in some of these encounters using her words and body language alone, and likes to try to make friends of those who threaten her if possible. She usually does this by offering them herbs or fancy trinkets she makes from things she discovers in her travels, sometimes just selling strange relics outright. She's always gotten a thrill from exploring the unknown, and takes great satisfaction in learning the knowledge of others in magical and alchemical fields as well as any form of history.
Fears: Leyonta fears having to fight, and she fears living too long without a mate. Now that she finds herself in a mostly unknown world without the acknowledgement of the tribes, she also fears not aquiring friends at all.
Strengths: Leyonta is good at co-operating with others and she is charasmatic. She knows how to play her cards, so to speak, with strangers and is good at reading their suble body language, however she has quite the body language of her own. She is a really lightweight dragon for her wing span and is an excellent flier. Her small frame allows her to walk over long periods of time with ease.
Weaknesses: She has small, smooth and soft scales covering most of her body, which offer just as much protection as the skin of bass would but the plates on her chest and underbelly are much harder, able to withstand the thrust of a skilled swordsman. The same can almost be said for the thick purple hide running down her back from snout to tailtip, but it is still susceptible to a blade. This leaves her sides more vulnerable to attacks than most other dragons, and on top of her lack of armor, she is overall not very strong or large.

General Appearance
Height: 27 feet, full grown.
Scales: Her scales are blue, but there are all kinds of different shades of blues, and places where teal or turquoise are prestent as well. This color distribution is random, however the shades do get darker as you look towards the end of her limbs. As they get darker, they also tend to take on a single color. Her flanks are almost white where the colors become really light shades. Most of her scales are smooth and fishlike and a lot of them are damaged or missing from her punishment. (See history) She has a purple hide-like ridge trailing her spine, extending onto her forehead and snout and she has plate scales going from under her chin all the way down her underbody to the tip of her tail. These plate scales are a really pale yellow.
Eyes: (Eye color) Her eyes are a really light lavender shade and have black speckles littered about them.
Appearance: Her wings are hugely disproportionate to her body, but this doesn't hinder her flight. Despite that, she can't fold them shut all the way, which she doesn't mind. Their membranes coloration almost forms a rainbow, lacking quite a few colors. The rest of her body is small and sleek, yet still mamages to look fairly toned and fit. She sometimes wears a satchel around her neck which will rest on her chest, or between her wings if she wishes. She uses this for trading and only wears it when she is planning to do so, or going out in search of rocks to dress up and sell. The satchel is made of a very dark leather and has additional pouches sewn to the outside in various lighter leathers.

Tribe Information and Status
Tribe: Rogue
Inheritance: She's from a different realm, but if she was from Pyrria she'd be a purebred LightWing
Rank: N/A (Likes to trade.)
Family: Leyontas family remains in her home realm. She had two sisters, a brother and both parents were alive, although barely. She was the last born of her siblings.
Mate: N/A
Hatchlings: N/A

Skills and Abilities
Normal Abilities: Leyonta can fire a beam of burning light equal in power to a real LightWing.
Special Abilities: Lightwings can change their color to match their surroundings. Being a different species Leyonta cannot, but she can turn into a shadow and mimic the natural light present, becoming unseen even in broad daylight with concentration. This only applies to natural light, not magical or artificial light. If she is in shadow form and a man walks by her with a torch, the light will reveal her shadow even in daylight. Same with the light of a LightWing. If a creature has low light vision, her shadow form will always be revealed to them. She is still vulnerable to attack in shadow form, and doing so will pull her out of it.
Fighting Style: When she has to fight, she takes to the skies and strikes down at her enemies with her beams of light and tries to keep as much distance between her and her enemies as possible, usually working to flee.

Background
History: Leyonta comes from another realm. In this realm, there were four kingdoms all in termoil over a large continent endlessly surrounded by seas and petty islands deemed undesirable. Each kingdom had their own study of magic, and Leyonta was in the kingom who chose light. As a student of light, she could never grasp the concept of healing, which was often the first taught and simplest of their magic. Instead, she found it easy to sink into the ground and become her own shadow, slowly learning how to mimic the light in her surroundings as she practiced. This was often considered a masters tactic, however it seemed to be the only thing she could truly grasp. By the time she was 1,245 years old, the King finally took notice of her affinity for the skill, and brought her in as a spy. For many years, her spy mentor trained her in the ways of keeping her actions invisible to suspecting eyes, and how to gather information on enemy movements.

When the King and her mentor both felt she was ready to be a spy, they let her into the highest priority kingdom to serve a new undercover life in the enemy kindom. The kingdom she was sent to was the biggest threat to her kingdom, their army far surpassing her own kingdoms. Despite this, within two centuries time, the enemies infrastructure had crumbled and their banner was replaced by the light kingdoms due to Leyontas continuous leaks on enemy movents, tactics, and stockpiles.

She was renowned as a hero until a new King stepped into control and her status was forgotten to the public. Additionally, the new King began pairing spies on missions, rather than having them do solo ops. The spy Leyonta was paired with, Vertci, they never got along. Every mission they ran together was sketchy because of their conflicting tactics and training. This eventually led to them being discovered and attacked by the enemy kings guards while in the main court. Leyontas "partner" managed to escape, but at the intentional cost of the other. He left Leyonta to die, but the dragoness managed to shadow her way out of the castle and escape.

When she reurned to her King explaining what her partner had done, he claims her a liar, as Vertci had already explained to the king that Leyonta had helped him escape and sacrificed herself for him. The king honors this lie and rewards Leyonta as if it was true, but she was furious and late that night, she decided she would seek revenge upon Vertci. In a blind act of vengance, she finds Vertci andq kills him. No one was going to get away with doing something like that to Leyonta.

Months roll by and she was sure she had gone under the councils radar. It was a serious crime to kill another high ranking member your own kingdom and you could be executed for doing so. She realizes this wasn't the case when one day she wakes up to the Kings guards and some members of the council already in her bedroom, preparing to seize her. They tie her up and drag her across the island, being sure to make the trek as painful as possible for Leyonta. Their journey ends at the portal all kingdoms used to banish any criminals, or evil beings such as reanimated corpses and demons. They soon toss her into the portal after a brutal final beating.

She has been living in Pyrria for about 50 years, leading a mostly invisible life amongst the choas of the monster invasion. She wishes to join one of the tribes, however the lack of politics between them all currently confuses her in making a decision. If one had a cause she could get behind, she would side with that group. Using her abilities as a spy, she has only found them surviving amongst their own ranks, with no intention of helping eachother beyond the allegiances already formed.
RP Sample: (WIP)