Hope was a distant thing for Malaki, faint and distant like a star in the sky. But yet, he always hoped. Other survivors thought he was crazy and made it publicly known. It helped he had visions of survivors, of surviving dragons in the mainland needing a place of refuge, a place to rest.

But when everyone called you crazy, you eventually started to believe it. Malaki the night wing had no support, no official aid from those in power that had the power to help, but did not. His little outpost on shark island was not impressive by any standard. But that he alone set up and ran the place was impressive in its own right.

It was by all standards a working field hospital should any need it. Fully stocked, but not fully staffed. Malaki alone was the only healer here. But yet he was here, dutiful and vigilant ready to give aid to any that would come, if they came.

Seeing the future could be seen as a gift by some. But Malaki did not see it as that. He could see survivors as they lived, and he could see them die before they even did, powerless to do anything about it. What is the point of seeing the future if you cant change it? He asked himself on more then one occasion.

There came a day though that he could see a survivor coming to him. Not just any survivor but a soul mate. Again seeing the future seemed a curse o Malaki. To see all the possible good and bad in your life laid out, to know love for another before it even happened, to see the future, good, and bad, laid bare.

To see all the possible futures like a thread in a tapestry, it was quite maddening. But there was a respite from it all. A elixir, a poison, a cure. Call it what you would, but it always brought piece from the visions for a short time. But at the cost of pain.

Malaki tended to the small but functional field hospital on shark island. Watching and waiting for the one from his visions.

The air was always colder higher up. Usually, Sherlock didn't mind, but today had already been long and she was tired of using her energy to warm herself.

She knew that she needed to keep flying, but with every beat of her wings, blood seeped through her torn scales and scattered its dark spray into the wind. Sherlock was beginning to get desperate- all the medical outposts she knew of were farther inland and were probably full of the more grievously wounded civilians.

With a final scan of the ravaged treetops, she let her wings still themselves, and began to glide. Wherever I land, she thought, is where I'll wait to find out whether I live or die. Her mind was calm even as her glide slowed. The sharp edges of burnt trees rushed at her, black as her own hide, a preview of the destruction further inland.

She hardly felt the impact of her own body on the hard earth, only registering the dull ache of her wing as it ground against the soil.
She felt heavier than ever before, every part of her wanting to fall back to the ground as she stood up.

She could see, in the near distance, a small outpost that looked less advanced than the others but impressive nonetheless. Surprised and slightly suspicious, she tried to go towards it, but her legs failed her and she could only sink to the ground.
Sherlock slept, the pain of her shoulder and wing creeping around the edges of dark dreams.
_______________________
Who the h*ll is Bucky? 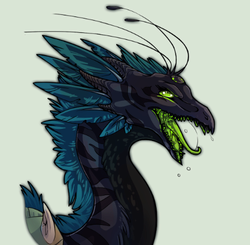 Malaki had just finished moving some sealed clay jars with medicinal leaves into a small cave near the camp. The cool dark of the place made it a excellent place to store plant material. Like a natural pantry. When Malaki came out he saw a figure in the distance. His heart rose at seeing another living soul. Malaki did not see any dragon for days? Weeks? In truth he did not remember anymore, and had stopped bothering to keep track of time. Thinking about the passing of time was a distraction.

When the figure dropped to the ground his heart sunk. There was no time to think, now was the time to act and his training took over. Malaki rushed over to the dragon and started to pat her arm with a clawed hand to test response. "Your going to be ok, I'm a healer." At this point he examined the damage. There was definitely bleeding. He had to control that first.

Pulling out some leaves from a pouch on his chest harness the night wing started to chew on the leaves. The plant leaves in itself were useless by themselves. But for some reason when they were mixed with saliva they had incredible healing properties. Malaki did not stop at chewing, while he chewed the night wing healer was already taking out some moss from a pouch and a sterile cloth.

Spitting out the chewed up leaves he started to apply it to the site of the injury. Next he applied the moss on and finally the cloth. Malaki then applied pressure on the dressing with both his foreclaws. He needed to get this female to the safety of his camp and out of the open. He would carry her if he had to.

Sherlock slid in and out of consciousness and became vaguely aware of the unpleasant stickiness of a healing salve on her wing.
She couldn't be sure if she imagined it or not, but a tall figure stood besides her, dark in his worry, clearly determined. When he spoke, briefly, his voice was low and reassuring. He was in constant busy motion, delving into small satchels and pouches and applying leaves and mosses to her wing. The mixture stung and had a sweet odor that clung to her nostrils, but it definitely stemmed the bleeding.
She had been looking for survivors for a long time, but now that she had found one, it was her who was injured and in need of help instead of the other way around. Humiliated to be found in such a condition, she turned her head and let her eyes close in shame.
She could tell that this healer wanted her to return to the dark safety of his building, but she could not find it in herself to stand. Her legs felt heavy, as though she'd been lifting debris all day and had worn her muscles out. The green light of her eyes and mouth were dimmed in her confusion and pain.
When she drifted back into her troubled sleep, her dreams were dark and silent, interrupted only by the feeling of being jostled gently.
_______________________
Who the h*ll is Bucky?

When Malaki saw the females eyes open he let his jaw hang open in a smile. "Hey, still with us I see". He said with a gentle voice. "Don't worry, your safe now, I'm going to take care of you". Reassurance was always a important thing for a healer to tell his patients. Even if the healer knew there was no hope of survival, you always told the patient they were going to be ok.

Malaki tilted his head to the left slightly as he watched the glow in her eyes and mouth flicker a bit as she turned her head away. "At least I'm not the only one with glowy bits", he thought. "Ok, lets get you somewhere more comfortable", Malaki said lowly as he maneuvered himself to pick the smaller female up in his foreclaws.

Using his tail as a balance the night wing carried her standing upright on his hindlegs to a mud shelter he had constructed that had long since hardened under the sun. He needed to keep a close eye on this patient. He carefully put the female down on nest bed of small water smoothed stones and leaves. His bed to be precise. If he was to monitor the females health closely the best way to do that was to keep her in his shelter.

Malaki examined every inch of her body while she slept and concluded that the damage was superficial. No life threatening injuries. She was just exhausted and the best cure for that was food, rest, and tender loving care. Malaki left her alone in peace to sleep in his bed while he looked over some mind power scrolls he had "borrowed" from the onyx citadel back on the isle of shadows refuge. Borrowed as in taking without permission.

Pyrokinesis, remote viewing, spirit walking, dream walking, he had been trying to learn if he had any other mind powers. So far nothing, but that did not stop him from trying. Who knows, perhaps one day he could develop it. This time though he looked over the telekinesis scroll. "Ok, mind over matter, sounds simple enough". He said lowly to himself.

Putting the scroll back on the shelf he walked a little bit away. Pausing he looked at the female in his bed. She was still sleeping. "Ok, mind over matter, you got this" he said to mentally give himself confidence. Reaching out a clawed hand in the air he focused on the shelf of scrolls. "Move", he commanded. The scroll sat still. "hmmm". Malaki sat staring at that scroll and focusing on it to the point the pressure was building up around his eyes and aching his head. "C'mon, fall off, twitch, do something". He said in annoyance.