Nevermore sighed, getting up from his make-shift snow cave he hid in to let the blizzard pass. A dull ache emanated from his weary wings, and he rolled his shoulders to try and loosen them up.
“Note to self, don’t fly for three days straight after getting attacked by deadly monsters”, he groaned as a particularly painful throb came from his shoulders. Shaking it off he dug the last bits of snow out of the way and emerged into the sunset, “sitting curled up ten feet under the snow probably didn’t help either”, He mused. He turned his square-ish snout over to the direction of the sun. Noting its position, he turned North and began to walk, deciding to let his wings rest. It would take longer to get to where the Elderwing city supposedly is, but he could manage, he’s done this for two years now and has faced more daunting tasks. Besides, that would be the best place to gather information for his small-time business.
He started as a small white rabbit dashed in front of his toes, an artic fox after it. He never liked accidentally squishing small mammals, some might call him a pacifist, but he’s had to deal with monsters and opposing rouge dragons often enough to know that title isn’t true. What’s wrong with not wanting to kill innocent less-sentient creatures? He sighed, continuing on when the tiny hunt was well away from his ice-crusted talons.
He checked the bag he had grabbed from a long-dead skywing, adjusting it so it slung across his armored back securely, and checking that it’s precious cargo wasn’t frozen soled after yesterday’s ordeals. He also had to find the client this package was for, but after the monster outbreak most dragons were scattered ungracefully across Pyyria, and the groups that weren’t were always moving, making everything more rough for him.
Sighing he scented the air for signs of a snowstorm, and seeing that there were none, continued one as the night enveloped the sky. 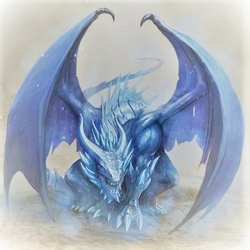