Elric, the Beacon of Hope

Elric, the Beacon of Hope

Type of Character: Dragon
Link to Character List Page: First new character, no link to the podium of characters.

Personal Info
Name: Elric
Alias: The Hunter, The Light, Avenger.
Age: 25 years old.
Gender: Male
Sexuality: Bisexual
Personality:
Elric absolutely adores a challenge, almost seeking them out under any circumstances that he can, which is why he has vowed to attempt to rid his area of those dreadful monsters. Elric can be stubborn and very protective over people who he deems deserves it. People who pickpocket and the like, to him, are boring, but those who have a keen will and have a clear desire in anything they do he has a natural fascination for. Although something else to note is that he's also rather arrogant and overconfident in a fight, wanting to try and prove that he's the best no matter what. Typical arrogance of some dragon around his age.

Although, here's hoping that he breaks out of it.

As a human, he carries most of these qualities across, being very protective (almost to obscene levels), intrigued readily by new things and has an innocent misunderstanding of how people trade and barter. It's not his fault, he's a dragon after all.
Fears:
-The lose of his 'father'.
-Being unable to protect the people who he hides himself with.
Strengths:
-He's a rather good hunter, both for monsters and for normal animals. This is mainly due to the fact that he has decided to devote the majority of time to slaying these beasts and as such, studies their movements whenever he can. From a safe distance, of course... Until he decides to hunt!
-Elric is a very capable fighter and, despite being an EW, is incredibly gifted with flight and is able to take sharp turns without blacking out.
-Elric also has a rather gifted venom. Upon biting, it stops the coagulation of blood and allows a venom to flow into their veins. This causes numbness after 2 posts and limb immobility after 5. This only applies if you don't try and get rid of the venom, a simple herb treatment or wrapping something around the wound so that it stops fresh blood from flowing out will be an easy fix for this. The immobility lasts only 2 posts after it has set in, and it only affects the bitten limb, i.e, a bite to the arm won't affect the wing, for example.

Weaknesses:
-Elric is a rather stubborn dragon, not willing to really back down from anything. That can often leave him in dire conditions after a fight, bringing him close to the brink of death which is never that fun for him.
-For the life of him, Elric cannot make proper human sentences, no matter how hard he tries.
-Elric, in his human form, has natural human skin and as such has no scales, making him much more vulnerable.

General Appearance
Height: As a dragon he stands at 39 feet, but when he is fully grown, he will be around 70ft. Human form stands at 6'4 and as such, is rather tall.
Scales: Elric has large, black scales which overlap one another. They almost resemble plates over his form and his underbelly has a white, creamy plating.
Eyes: In his dragon form, his eyes are yellow. In human, they are blue.
Appearance:
Human Form
In his human form, Elric is a slender, lithe and tall-looking man, looking quite young still and around the age of 18. He isn't very muscular, but has an innocent look to him, something that the dragon cannot change. To hide himself, still being unsure of the people he hides with, he often will wear a black cloak around his form, which also covers the dark attire he has. Although the inside of the cape is rather exquisite, being dabbled in what looks like stars. 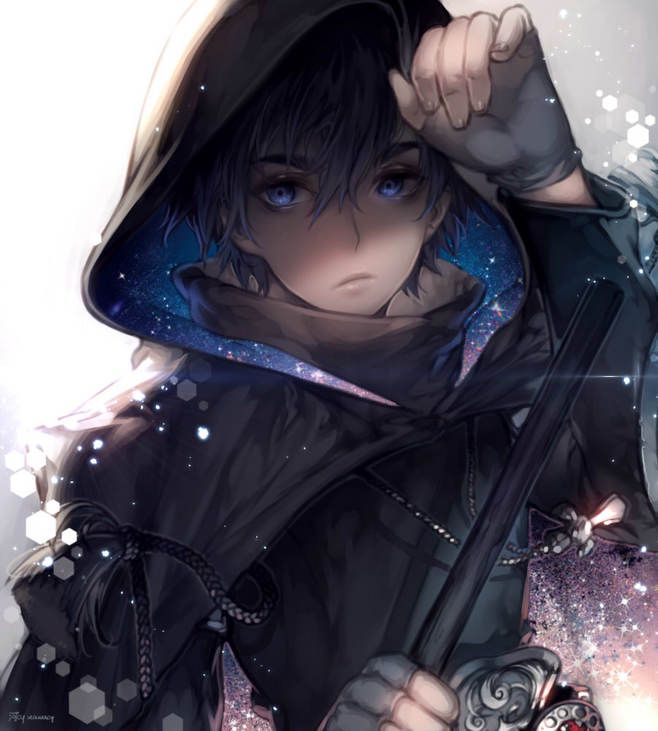 Dragon Form
Elric is a very, very bulky and strong looking dragon, having incredibly hardened plates that are able to withstand significant hits thanks to his heritage. His head is adorned with a pair of horns which thrust forward, bending in a way in which to terrify people who oppose him. His colours over his back and around the edges of his wings come across as a water pattern hidden in the blackened colour. They also fade from a yellow into a brilliant aqua. Elric has a thick, heavy set tail and he also has a rather muscular form, thanks to his build in regards to his legs, chest and tail. Details of what he looks like can be seen below.

Tribe Information and Status
Tribe: Rogue.
Inheritance: A rare, pureblood EarthWing.
Rank: N/A
Family: The veteran soldier, Joseph, is his adopted father.
Mate: They do not have a mate.
Hatchlings: No hatchlings either.

Skills and Abilities
Special Abilities:
-Transformation: Elric has the ability to shift into a human every other post, although, when he does this he loses all attributes with his dragon heritage. This means, no scales, wings and his height. He becomes an ordinary human which is unable to communicate with other humans, although he is still attempting to learn their language. The only thing that he retains are his dragon senses, but that is all.
Combat Style: Elric is a dragon that strikes like a snake, relying on his venom to work against his prey while he strikes at weak points around his opponents body.

Background
History: https://www.rpgdragons.org/t5307-a-light-in-the-dark-of-the-world#65348
You can see it here~!
RP Sample:
Sun broke through the grey clouds, the small form hugged lightly against the larger mans leg. His blue eyes were wide with shock, trying to take in what he saw but, at the same time, wishing that he'd never seen it. Horrified, Elric turned his face away, burying it against his leg as something wet trailed down his face. What were they, why did it make his chest feel so constricted?

"My dear son," Joseph began, "You didn't mean to cause this and you saved more lives than have been lost, all thanks to your efforts." He said gently, but Elric was shaking his head, mumbling something in his own tongue. He strained to understand the humans, but... It was almost in vain.

They are a demi god. They transferred it over from their character Tempest, which you agreed upon.