A grumble could be heard, followed by a victorious screech. It was a waiting game and the birds knew it. Sooner or later one side would falter, leaving one hungry and two free or something far less fortunate for the pair. Revi could barely remember how they got here. The two of them met up sometime after she had ran from the IceWing territory before there were feathers flying, a mix of their bright orange and an intruding black. She was still tired from her flight out here since it had probably been one of the longest flights in her life since they were taken by the IceWings. They had managed to flee and found themselves in a hole in one of the grand trees, a tight squeeze for the both of them and too small for their attacker to get at. But he wanted his prize, and he wasn't afraid to wait.

Revi had considered using one of her powers against their attacker, but in the end hadn't. In this space the shriek would hurt them as well, the walls potentially being able to cause long term damage. Her other option was to catch herself on fire and dart out, but the phoenix didn't want to cause the tree to catch fire, even if it might not harm her. A fire might catch the attention of other, more dangerous creatures, and it's bad enough with the one.

It seemed to go quiet outside. The small bird cautiously peaked her head out. On a lower branch was the bird, over three times their size with jet black feathers. Or, they looked so until you caught the colors of purple and blue that shone on them. To anyone else in a calm moment the bird might have been described as beautiful, but to the young phoenix all it screamed was predator. If the bird hadn't turned its head to spot the head appearing out of the hole they might have been able to try and escape, but in the brief time they had it came back, furiously yelling at them to give up and come out. Revi whimpered as she shrunk to the back of the tree, hoping that maybe Navi had a plan to get out of here. 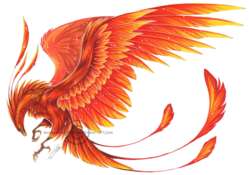 Similar topics
» Ice and Fire Just Don't Mix (Private, Tahki)
» Wings of Fire [[Private for Flames and Nemesis]]
» The Spark To The Flame (Private; Fire Fly)
» Ice in the Presence of Fire. (Private and Invite only)
» Stumbling into Fire (Private with Flames)