A shallow Reef (Open to all)

A shallow Reef (Open to all)

Lastrioso slowly emerges from the deep sea,carefully watching over the shallow Reef before him.
It's nothing special but for some reason he always returns to this place to rest after a long hunt even if he can barely stay submerged in the shallow water which might actually be the reason why he comes here as being this close to the light of the "Outside" world is quite a welcome variety after weeks of nearly absolute darkness.
A last quick glance over the sky but with nothing in sight he just swims into the reef and takes a satisfied look at his prey, a Borosque and a rather large one as well.
"It's been quite a while..." he mumbles to himself before taking a large bite of the strange creature.
He can't help but be amused of the creatures fate as their ways of killing are pretty similar even if at the end it was him that crushed the Borosque. "There is always a bigger fish...huh?" he mutters again.

It takes him quite a while to devour most of the Borosque but it satisfies his hunger and he can stay up here for a while to regain his strength.
After a while his mind drifts off, he thinks of the coast...should he visit the mainland again?He shakes his head at this idea "Way to much trouble...".
He got pretty good at being alone so there is no point even if...he looks at the mostly eaten Borosque. "What are you looking at huh?" He says in a somewhat annoyed voice and and flings the remains of the Borosque down into the abyss with a little tail swipe,annoyed by his own thoughts he just tries to rest for a while and watches the sky trough the surface above him. 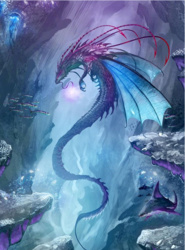 Ah, there was truly nothing more gorgeous and beautiful than traveling the crystal seas. Such magnificent oceans were like none Jansi had ever seen before. Not that the drake had ever been much places else. Indeed, he had been to the Shimmering seas, but still, he quite enjoyed the cool, tropical climates of the Crystal Seas. They appealed to him in a... well, let's just say familiar way. He loved the warm weather. Call it a FireWing thing, but he enjoyed it very much, couldn't get enough of it.

In fact, as he was soaring over the ocean, his eyes were practically closed, sky-basking in the delicious sunlight that spread over him. Ah, what it would be like to be one of those plant dragons, that simply get their energy from the sun. Peculiar fellows, those plant dragons. The EarthWings in general. Large beasts, wise leader, from what he'd heard. True, Jansi knew that the FireWings were technically part of the Twilight Imperium... but he hadn't much been affected by it. He had been off travelling the world before the monsters hit.

But Jansi was still a keeper of knowledge, even if he had greater knowledge to pursue. With a chuckle, Jansi would open his eyes, and swoop down closer to the water, taking a breath of the salty air, and enjoying the feeling of the spray from the waves as he skimmed over it.

Heh, who knows, maybe he'd run into some gorgeous SeaWing beauties. That would be an extra plus. In fact, Jansi had even considered visiting the SeaWing territory while he was here. He had heard rumors that something had been killing off the SeaWings, or that they had been disappearing. He'd just have to see if those rumors were true!

As Jansi's wings began to tire, he notices a small island. He passed over a small reef, his body casting long shadows over the beautiful ecosystem beneath. As he got closer, he realized it wasn't really an island, more like... a small, rocky outcrop. Nonetheless, a place to rest.

Folding his wings, Jansi landed on the rocks, stretching out his body, shaking out the flight cramps, "Ah, what truly marvelous scenery!" the scholar mused, sitting down, flicking an ear, as he watched out into the ocean, hearing the distant cries of seagulls and the smell of all kinds of prey he'd never seen before. 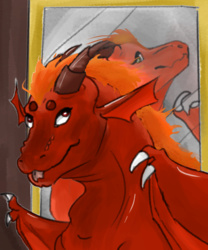 A distant noise tears Lastrioso from his light sleep, did he crack something by accident?After all he likes to wrap part of his body around rock formations to not just drift away in his sleep.
Though this thought quickly leaves his mind as he opens his eyes and spots the unknown FireWing not far off his sleeping spot, he tries to think of a reason why the stranger might be this far off the FireWing territory, but after all it doesn't really matter as it can only mean trouble.

After a few minutes he decides to camouflage himself and take a closer look at the intruder, this is after all his place right?
His body becomes as crystal clear as the water around him as he swims slowly toward the rock on which the unknown FireWing is currently resting, but as he is moving across the shallow reef he swirls up a bit of sand, this leaves a rather strange view for  anybody outside the water but it could be just a strange current right?

This way he would slowly swim around Jansi's rock to take a look at the 'Intruder' from every perspective.

Jansi admired the ocean for a bit. Such beautiful seas. The water was like diamonds, or sparkled like them. The small but noticeable breeze kept him cool, as he relaxed. He wasn't really too worried about monsters. The water here looked too shallow for any of those bigger fellas to actually do any damage to him. Instead, he simply sat back, catching sunlight.

He would probably go back to flying soon. Maybe he'd catch a fish while he was here. His mind distantly thought about potential dragons. Sure, he might encounter one, but what was the chance of that? The ocean was huge!

However, as Jansi looked down into the clear waters, curious about what kind of fish were nearby, he thought he saw the water ripple. But there had been nothing there. How peculiar. Curious, he decided to get a bit closer to the water. Perhaps a school of tiny fish?
_______________________
Jansi⚥ - FireWing Keeper of Heritage(Age 26)
Rayla♀ -  Demi Goddess Rogue(Age 40)

A couple of thoughts run through his mind as he watches Jansi, the unknown dragon isn't to big and he could probably pull him into the water where he should have the upper claw right?
Should he even try to attack him?He could be just passing by after all but...no...this cant be a coincidence right?And so his mind turns and twists for a while until he comes up with a plan.
He will just try to scare the stranger away as there is no point in outright attacking him even as it took him quiet a while to shake this idea off.
The stranger has to be scared of him after all as he is clearly bigger and this is the only thing that matters right?This is why he hates to deal with other dragons...it's just to complicated.


Slowly he moves into position directly underneath the unknown dragon, his lower body half coils around the rock as he uses it as a foundation to pull himself outside of the water.
It doesn't take him long to get upright and he would towers quite a bit over the FireWing as he measures nearly 100feat in this position.
His scales rapidly return to their usual color due to the quick motion but for a moment it almost looks like a statue of solid glass which turns into a dragon, while he spreads his wings and leaves out a mighty roar to scare the potential enemy away.

Jansi was, to be honest, kind of oblivious. He, yes, was investigating the strange, seemingly unprovoked movement, but he was doing it rather casually, like he didn't expect much of it. Heck, he was even looking forward to catching a potential meal, lazily leaping down from his perch and casually sauntering over towards the shore, not holding himself before high, his body loose and relaxed. Oh, my, would that certainly be a mistake...

As Jansi began to approach the shore of the small island, something suddenly burst from the watery depths. A massive serpent reared it's head, letting out a massive roar. Immediately, Jansi's mind snapped to action, and he let out a small cry of surprise. His body immediately tensed up, and his muscles snapped his wings open, so startled he actually leaped from his spot.

He hovered in the air for a bit, trying to regain his balance, and reaching a comfortable distance of about thirty feet in the air from himself and the creature. Once he had gotten over the initial shock, Jansi took a closer look, and realized this was a dragon, not a monster. "Ah, greetings, stranger," Jansi said, still a bit shaken, "Um, this wouldn't happen to be your territory, is it?" he asked cautiously, ready to dart if the thing decided to attack him.