Top posting users this month
Who is online?
In total there are 7 users online :: 1 Registered, 0 Hidden and 6 Guests

Warmth in the Cold ((Svadilfare and Lulu))

Warmth in the Cold ((Svadilfare and Lulu))

Castiel was gone and Lulu was homeless.

What had she done wrong? She did everything she could to please him, from fanning him with a ginormous leaf to being an object he could vent his fury to, clawing and biting her. It wasn't a good purpose, yes. . . But it was a purpose, which was better than none at all. But now Castiel was gone, and Lulu was useless once again.

The girl trekked through the snow, her messy black hair flying in the wind behind her as harsh snowflakes flew into her blue eyes. Lulu had nothing to protect herself against the almost unbearable cold, as she wore only a dress and no shoes. Her feet were becoming rather numb.

After travelling a few more meters, Lulu decided that she couldn't take it anymore. She fell into the snow and sat there alone, hiding her face in her knees. Her skin burnt and stung from the merciless fury of the snowstorm. She couldn't see anything past the white screen in front of her. She had hoped to come to civilization. . . Maybe her momma was still home, and her daddy. . .
_______________________ 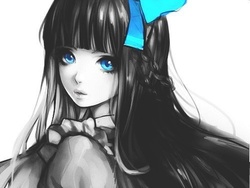 Svadilfare walked through the snow-covered forest that bordered the left side of Kryo. On his back he carried a fattened deer and a basket overflowing with fish. Though there was more than enough to feed his family, the warrior-assassin was not taking this home. His destination was instead a small hut near his home, which was used when himself or one of his children had a cold--to ensure the sickness was not spread. This time, it was inhabited by his wife, who had been sick for quite some time now because she had not yet learned that venturing outside when ill--particularly if one lived in the frozen lands of Kryo--resulted in that illness lingering. Apparently, Celestia had never ever been sick in her old life. Svadilfare was almost tempted to continue practicing healing magic so he could relieve her of her cold... But then she wouldn't learn, would she? She was lucky he didn't mind taking care of her.

The Kryoan was pulled from his thoughts when a... feeling came to him. He looked around. A few brave creatures were wandering about in this cold but most were out of view. Then, from behind a tree just to the right of him, a woman appeared; she was no stranger to him. "Yosanji?"

The spirit of San moved away from the snow-covered tree and made her way to Svadilfare. She seemed to know his question before he even asked it. "I don't know, but I do know it's a one-time thing." She came to a stop in front of the man and looked him over, as if something about him had changed since the last time she saw him. After a few moments she smiled lightly at Svad. "You kept your word."

Svad didn't seem terribly surprised that she had known what he was going to ask. He set the basket and deer down when she stopped before him. "Did you really think I'd go back on my word to you, even in the state I was in?" San didn't answer; she didn't need to. She looked at his right hand and reached out for it; she almost seemed surprised that her hand went right through his. "So why are you here?" Svad asked as he watched her.

"The twins weren't the last I had before I met you. I had another daughter... She was taken from me when I was in the market. I searched all over Brysur but never found her. I never told you because I figured she must have been dead by then, because she had only been an infant. Even if she had been alive still, it would have been impossible to find her. But she is alive and she's here. You'll find her just ahead."

Another silence fell between them as Svadilfare processed this information. After a long moment, he said, "I would have searched for her if you'd told me. How do you know it's her?"

"I know. And you wouldn't have come back until you found her. I didn't want to lose someone else I loved. I know because a mother always knows... and it helps that she has my eyes." San replied with a chuckle. "You can tell her about her real father if you want. But knowing how good you are with kids, she probably wouldn't believe you."

"Well, I'd have come back if you asked. And you're crazy if you think I'd ever allow that man to invade my mind long enough to tell a child he didn't care for about him."

San raised her hands in surrender. "I regretted even daring to think of it as I said it." She lowered her hands and turned to look in the direction she'd come from. "I'd take you to her, but my time is up." She turned all the way and started walking away.

"Am I still to set aside time to think of you?"

"You're not telling me you've stopped, are you?"

"Of course not. You're at the top of the list."

"Ha, I wouldn't exactly count Nari as a friend. An acquaintance, maybe, and even then not one worthy enough for my thoughts."

"Good! I expect my five minutes until the day you die, Pride of Kryo."

The woman turned as she began fading away and smiled, waving. "Live in peace, Svad."

Svadilfare waved back to his eternal friend before picking up his provisions and continuing on toward the hut. A little more than halfway there, he found the girl. She was barefoot and sitting in the snow, cold and alone. It was only now that he realized it had been snowing--living in place where it snowed almost every day, one tended not to notice when it did. Svad set his food down once more and approached the child. He removed his fur cloak and draped it over the girl. "I'm not sure if you've noticed, but you're in the middle of a snowstorm. It's not exactly an ideal place to rest."
_______________________

Shuddering, the girl looked up with wavering brilliant blue eyes to meet the gaze of a man she had never seen before. She was surprised to see a human out here in the cold, but Lulu did not have the strength to express such. The girl just kept shivering, nodding. "M- Mhm. . . I kn- kn- know. . ." She closed her eyes yet again, curling up in a tight ball in an effort to warm up. Lulu was too exhausted to stand, and she felt sleep calling to her. Slowly, she closed her eyes.
_______________________

Svadilfare pick up the child. The wind was blowing at his back, so he put her there, his cloak shielding her. He left the deer and fish where he had set them in the snow; he would come back from them. He began once more walking in the direction he had been headed. He couldn't know yet if the child were ill, but it wasn't because of that that he was going on to the hut. The hut was just closer than his house. Celestia was asleep when he arrived. Svad laid the girl down on the ground close to the hearth, and added more kindling to the slowly dying fire. He helped it along with a fireball, adding a little more wood, then went back out to retrieve the likely swiftly-freezing victuals. He returned a half hour later and immediately began dressing the deer. After, he cut three portions and prepared nine fish for dinner.
_______________________