Insert Image Here
Type of Character: Human
Link to Character List Page: https://www.rpgdragons.org/t4895-titan-s-characters
Name: Amabella
Alias: Mad Scientist, Plague Doctor, Omen Doctor, Bella, Ama
Age: 37
Gender:  Female
Sexuality: Bisexual (who would want to date her anyway?)
Personality: Amabella is intelligent, calculating, kind, and caring. Her meticulous and observant nature makes her an excellent scientist/doctor, often detecting clues and connections others superiors miss. However, she is also narcissistic, being infatuated with her intelligence and enjoys telling riddles to prove this, much to the annoyance of other people. She can also be awkward, unintentionally insulting, and selfish.

Killing Meleeloida was the catalyst for a major change in Amabella's behavior. The trauma of committing her first murder was enough to cause her to develop a split personality, one that's crazier and more aggressive.
Fears:
People finding out the truth.
Not being the smartest.
Strengths:
Smart- She's can problem solve impossible questions. She loves a good mental challenge.
Observant- Amabella can see things other people miss, which can help her solve problems.
Manipulative- She can convince people that they have a disease, or they should do this action to help.
Weaknesses:
Can't fight- Never learned how to never will.
Can't Defend- She doesn't know basic combat/anything with fighting.
Cold- Nothing personal, she just doesn't like people. Plus, her other personality does pop out from time to time.
Violent- She can have violent outbursts, especially when her other side comes out. This can make her hurt people she loves and or starting beef with someone.

Skills and Abilities
Skills The ability to scare the s**** out of anyone. (JK)
Equipment:
Lab- It holds everything a medieval scientist needs.
Knives- Stuffs to cut stuff with.
Sickle- Her "weapon" she carries around with her.
Combat Style: HAHAHAHAHA. Amabella doesn't know how to fight. 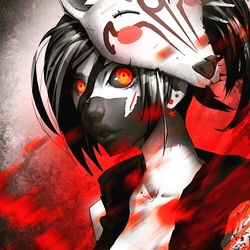