A List Of Amy's Characters That Is Possibly Too Long

A List Of Amy's Characters That Is Possibly Too Long

CHARACTER NO. 1
Type Of Character: Dragon
Name: Siren
Alias: The Deep Monster (called this due to the fact very few Seawings have actually SEEN her, most only find evidence of her actually existing, and the few that have find her kinda creepy and haven't seen more than a glance at her)
Age: 25
Gender: Female
Sexuality: Pansexual, not that she'll ever find romance but ya' know
Personality: Due to her growing up at the BOTTOM OF THE OCEAN, she's very shy. Though she never really strays from a fight with other deep sea creatures, if they try to talk she almost certain to flee. Her night vision allows her to hunt anything she can kill down where she lives, mostly she sticks to fish. The only times she ever is  out of the water is when she's in some of the caves that have air pockets, so she has trouble speaking actual words, but is great at reading body language and "sensing" emotions(I use sensing in the loosest sense of the word).
Fears: Other dragons, and light. More specifically other dragons seeing her in the light and being able to look at her.
Strengths: She has really good night vision, a lot of it because she doesn't see sunlight that often. She's also an incredible hunter, making up for her lack of physical strength with speed.
Weaknesses: Alongside being very self-conscious, she doesn't have a lot of muscle. Siren has bad anxiety, but can overcome it if the need arises(like, life and death need).

Height: 25'
Scales: Black and bioluminescent blue
Eyes: Bioluminescent blue
Appearance: She appears larger than she is underwater, only 25' on land. But, when viewed underwater, if you can see her at all, she emits a blue light for about three inches around her body. Her teeth are also incredibly sharp, resembling that of deep sea fish because of how often she sharpens them. Siren mostly doesn't wear any accessories, but she sometimes dawns a white shell necklace, tied on with some kelp like stuff.

Tribe: She would technically belong to the Seawings, so let's go with that.
Inheritance: Seawing/Nightwing hybrid
Rank: Loner? Monster thing that lives at the bottom of the ocean whom nobody has got a good look at? Yeah that, lets do that.
Family: Her mother was a Nightwing, so she doesn't know her. Her father is a Seawing, and he visits her every once in a while. He did teach her to talk, after all.
Mate: N/A
Hatchlings: N/A

Special Abilities: SHE GLOWS IN THE DARK HOW COOL IS THAT
Combat Style: Her style is just this: If it not friendly and/or looks like food, attack it and do it QUICKLY. She's a fast hunter and fighter, though not very strong. Her most powerful weapon is her jaws and teeth, as she mainly uses them to hunt.

History: When she hatched, both of her parents agreed it would be best to hide her. Thus, her father took her to the deepest depths of the ocean, where she has lived all her life. Taught to fear the sunlight and other dragons, she learned to swim from the fish around her, and is closer to animals than other dragons.
RP Sample: Taking off from the ocean floor, she tucked in her arms and legs and swam as fast as she could, the light she produced no more than a blur.

Type Of Character: Dragon
Name: Scorpion
Alias: Scorpy(only Bella calls him that, no one else)
Age: 27
Gender: Male
Sexuality: Homosexual
Personality: He's very brave, to the point of being stupid. He'll do anything to protect his human.
Fears: Being away from Bella for too long, he worries for her like mad.
Strengths: He's strong, REALLY STRONG. He can beat anyone in a physical fight! (not really but you get it) He heals fast with mud, but that's the only full earthwing trait he has. everything else is dulled.
Weaknesses: His love/hate feelings to humans. He hates all humans with a fiery passion, all except for Bella, who saved his life. (yummy, delicious codependency) Also flight is really awkward due to his size, and can't breath fire for as far as most Firewings can. He is more earthwing than firewing, so his earthwing senses are dulled as well as any firewing senses he has.

Height: 90' (and don't think for a second he doesn't use it to his advantage)
Scales: Murky yellowish-greenish-redish color
Eyes: Yellow
Appearance: Very tall, very very tall. He blends rather well with the forest, but his large size makes it hard to hide areas low in tall trees and greenery.

Special Abilities: Not an ability, per say, but having a human companion does help! (though she usually just helps his wounds after a battle, but don't tell the other dragons that!)
Combat Style: Fight first, ask questions later. He'll do almost anything to win a fight, but will do ANYTHING to protect Bella.

History: He was 14 when he met Bella(he has no clue what her real name is), he'd just gotten out of a rather nasty fight when Bella found him. He'd wandered into the woods to regain some strength. Though at first he wanted to burn her to ash for getting close, he passed out due to blood loss. When he woke up, he found Bella had taken pity on him and bandaged his wounds to the best of her ability. They've been friends ever since, and are very protective of each other. Mostly Scorpion does the protecting, and he's adamant she's the only human he can tolerate(cough cough actually likes cough cough).
RP Sample: He'd attacked with all his might, rage coursing through him like fire in his veins.

Type of Character: Human
Name: Sera
Alias: Belladonna, or just Bella. Her name was given to her by Scorpion.
Age: 26
Sexuality: Bisexual
Personality: Calm and collected, she's Scorpion's opposite. She's kind to almost everyone, but she only began to like dragons after her first encounter with Scorpion. Though she dislikes having close relationships. Also don't mess with her, she has a dragon buddy.
Fears: Other dragons besides Scorpion, she's terrified of being near them without him. She also fears losing Scorpion, as she was barely able to save him the first time. (Woop woop codependency)
Strengths: She's a good medic if you need one, she knows all about what creatures, including humans, need to live.
Weaknesses: Scorpions general absence, they rely on each other. Also she is small and weak and can't defend herself, but fear her dragon friend because HE WILL KILL YOU IF YOU TOUCH HIS HUMAN.

Home: She's nomadic to an extent, where ever Scorpion goes, she goes.
Profession: She used to act as a sort of healer before she lived with Scorpion.
Family: Sera doesn't talk about her human family at all, though it's known she has a sister. The only thing she considers family is Scorpion.

Height: 5'4"
Hair: Dark brown.
Eyes: Green
Appearance: Her skin is tanned from her years with Scorpion, but she's neutral in color. The only striking thing are here eyes, they're a bright emerald green.

Skills: She's good at medicine and stuff like it, really good with animals, too.
Equipment: She usually carries around a bag with medical supplies(and Scorpion too I mean what).
Combat Style: Run to Scorpion and have him tear whatever dare try to harm her to shreds.

History: She doesn't talk about her past, as her parents favored her sister. She ran away at age 13, only to find and befriend Scorpion. She was barely able to save him, and only did so because she thought he'd spare her if she did. They became close and are now like a family she always wished she had.
RP Example: She was terrified as she bandaged him, of him dying or her dying, she wasn't sure. 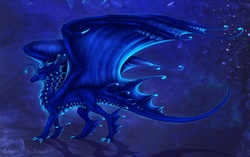 Re: A List Of Amy's Characters That Is Possibly Too Long

Hello there. If you haven't already, please read the New Members Guide. https://www.rpgdragons.org/t4665-new-members-guide-character-creation

Your character app must be posted here https://www.rpgdragons.org/f5-create-your-dragon Character Registration is only for after your character(s) has been approved. Allso, you can only have one character per account. So if you'd like to have all of these, you must make an account for each. If you have questions, please don't hesitate to ask.