(First off, I'd like to apologize for getting this out like a month after I joined. But I guess late is better than never, huh? Well. Here it is! Hope it makes the cut. Can't wait to start.)

Personality: Zalamiir is a kind and noble dragon who enjoys the wind beneath his wings and the freedom of the sky. He can be a little anxious when meeting new dragons, but once he becomes comfortable around them, he can be energetic, and will sometimes behave like a hatchling. However, this doesn't mean that he doesn't have serious side. If he feels threatened, he won't hesitate to stand against the threat. This is emphasized when something or someone he feels he needs to protect. As so, he has a mentality that he must be the best he can be, so that he can stand against whatever is thrown at him and emerge victorious.

However, beneath the kind dragon, a darkness stirs. Echoes of his past come to haunt him, more often than naught giving him sleepless nights and planting doubt in his mind to crush his resolve. This can lead to him to becoming suddenly aggressive, only to feed the the shadow in his soul that seeks to consume him.

Likes
-Flying
-Gems
-Sparring/Play Fighting
-Hunting
-Talking with other dragons
Dislikes
-External Armor
-Intense Temperatures (Being in a volcanic region or being in a snowstorm)
-Pompous/Arrogant Beings
-Feeling Restrained-Ex. Sets of rules that he feels restricts his freedom, or by physical restraint
-Feeling weak in comparison of others
Fears
-Drowning
-Death: More accurately what happens to one after death
-Losing whatever or whomever he grows attached to

Strengths
- Zalamiir is considered to be a well balanced dragon in areas such as speed, strength, endurance, dexterity, etc. but not particularly excel at them, such as him reaching a top speed of 60mph.

Weaknesses
-Much like it is his strength, it is also his weakness. Any dragon built for speed can outrun him, anyone built on strength can overpower him in direct confrontation.
-Zalamiir's entire underbody is comprised of his softer scales, making this area a great danger for him.
-Being a halfbreed, he is not immune to fire nor light attacks.

Height: 55ft (Young Adult currently) Full Adult 80ft
Scales: White or silver during the day, or gray or black during the night, as well as golden on the edges of his scales.
Eyes: Primarily white with hints of silver. However, it is golden around his narrow pupils.
Appearance: Zalamiir is an average built dragon, being a near perfect balance between strength and speed. His wing span extends to 60ft with a horn at the end of each wing. He has four toes on each foot, and claws- just like his two horns at the back of his skull and the spikes running down his spine, are an ebony color. His scales are a teardrop shape and are smooth. The edges of his scales are a golden color, primarily down the length of his spine to the tip of his tail. He can cause this golden color on the edges of each scale in different patterns, but only after absorbing a certain amount of sunlight.

Special Abilities
Of Fire and Light- Once a day, Zalamiir is able to fuse fire and light breath together into one attack. This can only be used for one breath and costs Zalamiir a great amount of energy, causing him to become fatigued much quicker.

Combat Style: Zalamiir has an all or nothing attitude when it comes to fighting. He either focuses all of his attention on offense or defense. Sometimes, he likes to use his tail as a whip, focusing on hitting his target's head in an attempt to daze him. While he is on the ground, he will always stay low in a form of crouch position, so that his underside is less exposed.

History: (Will be told through the RP) 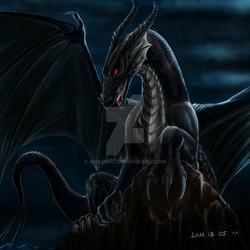 No worries, it's not like there's a time limit!

So the only thing you need to fix is your special ability. A hybrid is only half as powerful as a purebred for a reason. As a suggestion, you could have it so he can combine both breath attacks into one.

Will do! I'll make the changes sometime today, gotta head out for a while.

Special ability has been edited.

Oh, I forgot something, sorry. You have he is well balanced in speed. How fast can he fly? Also it should be mentioned somewhere that he is not immune to fire and light attacks.

No problem! Edits are done under weaknesses and strengths.