Wake's eyes slowly opened his eyes, felling a bit groggy from...what happened again? The wyvern began to try and get up, but soon found that he couldn't move. Then it came back to him. The trappers. They outsmarted the wiley dragon. They had set out live bait and hid a launcher with some sort of poisoned arrow. The small dragon began to try and thrash, but he couldn't do it. He tried to call for help, but his snout was tied shut!

He then began to think to himself. Why? Why this again? Do you hate me or something Kelrath, or was it finally time for me to have some rotten luck? He then looked around, seeing some muzzles, chains, and cages! He also saw another dragon. Another Rogue, and a female, by the smell of her. His grey eyes then looked over her. Like him, she was tied down, but by chains instead of ropes.
_______________________

Crystrix had messed up big time. It had been pouring heavily for days, and that meant that magma dragons such as her would normally avoid going out hunting, for fear of running into a dangerous foe while slowed by the heavy downpour. However, Crystrix had neglected to store food up despite smelling the coming rain, thinking that she could handle herself. She was a tough dragon, and types like her didn't need much food in the first place! But when the rain showed no signs of stopping, hunger overwhelmed her, and she eventually relented. A few small prey should have been an easy find for her, but the ability to track scents was severely lessened during a rainstorm. While searching, she had run into humans of all things. They had taken advantage of her weakened state and chained her up. A humiliating defeat.

After some time alone in a cage, Crystrix was greeted with a fellow inmate: A relatively small dragon. She rolled her eyes at his flailing, tapping her claw against the metal floor of their now shared cage, My, my. If this is the best they can catch aside from me, I might as well hang my wings up now. Crystrix shifted slightly, growling at the sounds of chains. They had purposefully chained her to the side of the cage, where the rain could beat down on her. If only she had a source of heat to sustain her, she could break free with ease! 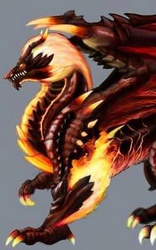 Wake locked his eyes on the dragoness when he noticed her seeming annoyance at him. He was already starting to panic, with even his frill-like horns tied down. He could barely move and this other dragon, a hybrid if he was looking right. The wyvern eventually tried to move closer to his cell mate.

Despite not getting much closer, he was able to see some more details about this odd dragon. Wake just kept looking at her with his ghostly, grey eyes. He really didn't want to look at the humans, or focus on the cage, so he was trying to keep his mind anywhere else. The wyvern finally managed to speak, though with some difficulty. "Why a you ooking at m li at, ad why do you et to at east stan whi I'm uck down ere?" (Why are you looking at me like that, and why do you get to at least stand while I'm stuck down here?) What could be heard of the wyvern's voice was stressed, anxious, and sounded almost like he was being to have some sort of breakdown.
_______________________

As Wake had probably noticed, the bindings that Crystrix had were much less restrictive in comparison to his own. They must not have had enough steel chains, and rope would have been completely ineffective for a dragon like her. However, there was another reason that the hunters hadn't taken extra measures against her movement. Steam rose with each drop of rain against her heated obsidian shell, and underneath it where magma would normally be glowing from between the cracks of her rocky armor, there was nothing but a slight glow. The only heat that she had was her inner flame, and it was beginning to dim from the cold, relentless storm. Despite her brave face in the midst of danger, Crystrix was in deep terror for her own life.

Not only was she unable to allow herself to let her fear show for her own sake, but Crystrix had to be brave for the other dragon that had been left in the cage with her. Obviously, this little drake was panicking, and it would only hurt the both of them if she were to panic as well. Instead, she focused her efforts on finding a way to escape for the both of them. "It's nothing...how much are you able to move?" Despite barely being able to move, Crystrix attempted to extend her frontal talons towards Wake, muffled instructions coming from the muzzle over her mouth, "My claws are sharper than average...if you can help us both escape, then try to cut the rope with them." With a muted sigh, she tried for a moment to comfort the dragon, "I know you are scared...I am scared as well. But for now, we can't let fear overwhelm us. We need to do what is necessary to survive."

Her armor cracked and shifted painfully against her body with each movement, "Hurry...they should be coming back soon." She pointed her muzzle towards the flames in the corner of the room, "If you can give me some heat, I can break free of these bonds, and tear these wretched beings apart!" She was leaving it all up to Wake, now, a desperate bet on a dragon he'd never met before. It would be up to him whether they survived or not...she hoped that he was up to the task.

Wake gave a nod, trying to swallow his fears as he slowly moved closer to the dragoness that he was caged with. It was grueling to him. Wake was designed for speed, not strength. Memories of his first trapping flashed in his mind as he wiggled closer. Being tied like this, being forced to watch Lewana be behead four times just to increase her headcount, and the lack of remorse any of those humans showed.

The small wyvern finally managed to get near Crystrix' talons, and quickly rubbed the the rope around his jaws against them. As the rope was cut, Wake shook his head, and managed to get the rope from around his maw. His horns were also untied, and went from resting against his neck to being frilled out. He then looked up at the 'ness and said "Thanks" as he used his teeth to free his wings and wing claws. He then used the wing claws to free his legs, allowing him to finally stand.

Wake then look over at the fire. How was he going to get over there? He was free, but he was still stuck in... in a cage. He froze for a moment, fear locking his muscles. But he thought about the one human who helped him, and the fact that he managed to somewhat get around his fear before. He had to think now. The young wyvern shook his head and looked around, finding a decent sized rock he could reach, and rolled it into the cage. Wake then grabbed the rope that bound him and brought it to Crystrix. "Ok. I'm not able to tie these ropes together, so I hope you can."
_______________________

Crystrix waited as Wake began to cut himself loose from his bindings, slowly pulling her leg back up to her body to conserve more heat once he had freed his jaw. If only the humans had left her with ropes to tie her down, she might have had an easier time escaping. Still, there was no time for that. She wondered what Wake might try to do to escape the cage that they were in, before noticing that he was rolling something large and heavy towards her, along with some of the rope.

At his request, Crystrix looked curiously at what he was considering, "I see...unfortunately, I am too stiff right now to even consider tying anything together. On top of that..." She gestured towards her razor sharp claws with her snout, huffing sadly, "My claws are so sharp, they would snap the rope if I tried." She lowered her head, narrowing her eyes at the ropes. In her experience with watching the humans from afar, she had seen them use ropes like these to tie heavy things to carts and the like. It always took at least two of them to make the knot well enough, however...

"I...have an idea. Follow my movements." Crystrix took the end of one rope in her teeth, gesturing for Wake to take the other. With careful coordination, the magma dragon attempted to guide her cellmate through the process of tying a rope, giving him various instructions until they had finished the job. "Ish...a little sloppy...but it should work."

Wake was more then a little disheartened when the dragoness said she couldn't tie the rope, his horns slidding down the side of his neck. But then she said she had a plan. The wyvern followed his cagemate's movements, with some difficulty, and would sometimes trading out his jaws with his wing claws.

Soon, the pair got the rope tied. It wasn't great, but it would work...hopefully. He gave a nod the the larger dragon. "Yeah. It should. Now let's hope my aim's any good." The wyvern then grabbed the rope and rock in his maw, and went to the edge of the cage. He dropped the stuff and gripped it in one of his feet.

Wake then spread his wings, seeing if he could get off the ground. Then he started to hover there, before quickly whipping his body around before releasing his grip on the rope, sending the rock flying next to the fire. Ok. At least that worked as planned. He then looked at the chained dragon. "All we have to do now is wait." The wyvern then realized neither of them knew the others name. "So. What's your name?"
_______________________