Insert Image Here
Type of Character: Lesser Species
Link to Character List Page: (Optional if is your first character. Otherwise link us and make sure your character is listed there. If you don't already have one you can create one here. https://www.rpgdragons.org/f84-character-registration)
Personal Info
Species: Manticore
Name: Alidrea
Alias: Ali
Age: 30 years
Gender: Female
Sexuality: Heterosexual
Personality: Alidrea is a rather serious manticore with a hot temper. She often speaks in a calm, emotionless, bland tone of voice which some may call boring and tiresome. There are a few words that describe her well, so I will go down with each attribute, one by one. Let's get started.

Grim. Alidrea is not easily amused, and it is hard to get her to smile. When one sees her grin, it is a rare sight indeed. She only seems to perk up around her son, Maximus. This does not only go for serious topics, but with everyday life as well. This also means that Alidrea is not one to play games or joke around, even when she's with her child. She can be what we call a party-pooper, as she doesn't have much of a sense of humor. She is often the one who looks on the logical side of things, which makes it hard for her to appreciate and enjoy puns or other jokes.

Stern. As a mother, Alidrea is very stern, although quite loving as well. This doesn't only go for Max, but for those younger than she or others who are in need of guidance. This also goes with her views on various things in life, as she makes sure to never fail to get her point across. This also labels Alidrea as determined, or what others may call stubborn. Alidrea doesn't mind which one may prefer, as she is a manticore who doesn't care what others think of her.

Hotheaded. Much like the FireWings in the Twilight Imperium, a thing Alidrea is known for is her temper. It's not hard to anger her or get her frustrated. She gets angry at the smallest of things, which makes her a hard teacher. If she were a human in our modern-day schools, she would be the teacher that everyone despised. However, despite her temperament, Alidrea keeps herself from lashing out. She has a sharp tongue in moments of agitation and is capable of being sarcastic.

Assertive. . . Some may call this curious or nosy, but Alidrea prefers the word assertive. She is a gal who was born with a curiosity for many things, including dragons, humans, and her fellow lesser species. Not only does this count as a thirst for knowledge, but Alidrea is pretty nosy as well. She likes gossip, although she is sure to keep her son away from it, and always wants to know every detail. Alidrea never actually goes up to someone and demands a good story, but really. . . It's something she wishes she could do.

Paranoid. Alidrea had a rough past, as the majority of her family was killed and her remaining sister was taken away into slavery, not to mention Alidrea's deceased mate. She often stays alone and doesn't get near humans, dragons, or fellow lesser species, unless she has to. The only time when she interacts with others is when she bumps into someone else. She never seeks out interaction with others. As said before Alidrea is stubborn, and she refuses to seek help from others, as she has a 'I can do this myself' mentality. She mainly stays away from others in fear of being betrayed or disappointed.

Fears: Alidrea fears losing Maximus or being humiliated. She is also afraid of dragons and humans, and has a distaste for both of them.
Strengths:
~Due to her golden hide, Alidrea can blend in well with the desert around the city of Ammos.
~Alidrea is tough! She's not exactly Saitama, as you can imagine, and is only slightly above average than others in her race.
~This manticore is good with grammar and reading. She can also pronounce words very well, and often uses large words in her dialogue.
Weaknesses:
~Like most lesser species, Alidrea is not as strong as dragons are, and can easily be defeated by one.
~Alidrea wears glasses, and she has blurry vision without them.
~Alidrea has rather weak wings that have a hard time lifting the manticore and going fast speeds. This causes her to have low stamina in the sky. Her wings are also her weak spot, and something her opponents can take advantage of.

General Appearance
Height: 15 feet
Fur, Skin, Feathers, and Hair: Alidrea's main color scheme is gold. She has a golden pelt, gold feathered wings, and long blonde hair. Even her skin matches the shade.
Eyes: Green
Appearance: Alidrea is a manticore with a mature-looking face, topped with long golden hair that is a sort of a mane. It flows down to her hips and isn't far from dragging the earth behind her. Two strands of hair frame Alidrea's face. The hair is bronze at the roots, yet the roots right above her forehead appear to be kind of purple. Her ears are atop her head rather than at the sides, and look to be deer-like.

Like all manticores, Alidrea possesses the body of a lioness. She wears two silver necklaces with blue jewels around her neck. She has feathered wings and a long tail that has a barb hidden in the floof at the tip.

Background
History: (What is your lesser species backstory?)
RP Sample: (Provide a RP sample of how you would roleplay. Optional) 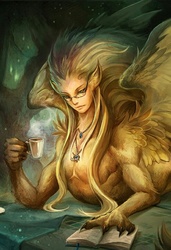