Personality:
A Reasonably quiet Dragon that enjoys silence, has ambitions for exploring and discovering new and undiscovered paths, interested in finding his purpose or where he belongs in the big bad world.

Values his personal security and safety, he is responsible and dependable. He works hard, If he is interested in a task he can accomplish almost anything. But has underdeveloped skills in concentration, enjoys finding practical answers to problems.

Values and appreciates friendship but struggles to make new friends being an introvert.

General Appearance
Height:15ft
Scales: Graphite black Scales,
Eyes:Red
Appearance:
Completely black dragon with a long tail his scales graphite black and rather ordinary the scales, his back becoming more rhombus like on his down his back to his tail. Wings medium sized compared to his stature and size resembling a bats wings.

Skills and Abilities
Strengths:
- His Speed
- Light on his Feet (Sneaky)
- Fast Flyer

Special Abilities:
Has the Ability to summon/create a thick black mist around him approx 1.5m around him. Effective at night allowing him to seemingly disappear into the shadows, during daylight his ability is unavailable to him and ineffective if he could.

Combat Style:
His combat style is speed concentrated, very fast and quick attack are his forte. He can withstand very little damage, he prefers to choose his fights whether to run, hide or stay and fight depending on the situation. 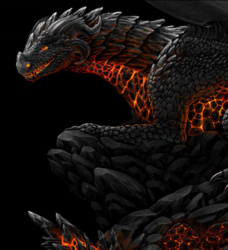 If this is a work in progress please place a WIP tag in the title. You say his strength is speed but don't explain how for example how fast he is if it's only on land or in the air too.