Aerouant was happy to have a home and someone to look after him. But the Tiny Fury had not seen his grandmother for more than a minute for a while now. She often left to "tend to some grown-up things", as she liked to put it. The Hatchling could only imagine what that must be. But it must have been important, because Astral was usually gone all day. Sometimes she came back smelling... strange. Not Dragon or food... he wasn't sure what it was. Today, however, he decided he would make his grandmother stay home and play with him. Aerouant ran from his room and into the fish room, which was exactly what it sounded like--an entire room packed with fish. He grabbed as many as he could carry in his tiny maw then ran--or tripped, rather--to Astral's room.

It was early morning, just an hour before sunrise, so Aerouant knew his grandmother would be there. As he entered her room, he tripped yet again and this time was thrown into a tumble. He rolled right into the sleeping Astral, dropped the mouthful of fish. He sat up and shook his head then grabbed a fish and ran around to the other side of the bigger Night Fury. Aero tossed the fish onto her snout then clambered onto her back, jumped up and down. "I brought fish! I brought fish!" he chirped happily as he did every morning. Though he was 2 years old, he was quite proud of the fact that he could bring his grandmother breakfast. When he was with his mother, he hadn't been allowed to do such a thing, granted he lived in a more dangerous environment.

When he felt Astral begin to stir, he'd hop down and sit in front of her, a dragon-ish grin on his face. He couldn't wait to see how happy she'd be to have her grandson bring her her favorite fish. 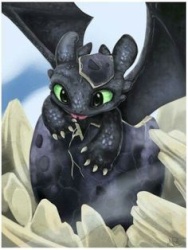