Species: Griffon
Name: Jupitus (joop-eh-tus)
Alias: Jupe
Age: 43
Gender: Male
Sexuality: Heterosexual
Personality: A loyal and fearless beast is Jupitus, with the heart of a lion. Jupitus will never shy away from a greater beast if someone he cares for is threatened by it, and would fight a dragon to protect his loved ones. He is also very caring towards those that have won his affiliation.
Fears: Uncontrollable fire - the idea of wildfire terrifies him, yet he has no issues with dragonfire or fires under control.
Strengths: Wicked talons can shred through hide and scale; eyesight makes finding objects and prey easy from up in the sky.
Weaknesses: No magical powers, relies on brute force.

General Appearance
Height: 44 foot
Feathers: Jupitus has the plumage of a Golden Eagle, with golden flecks running down the back of his head and his neck.
Eyes: Amber
Appearance: Jupitus has a formidable appearance, his top half being that of a Golden Eagle, brown yet flecked with lighter golden markings and a fearsome amber gaze which penetrates the farthest distances. His beak is cruel and powerful, his talons sharp and eager to tear into his victims. Upon his head, are two mammalian ears which look rather out of place upon his eagle head, and look rather lupine.

His bottom half is that of a great tiger, and his pelt is golden orange and adorned with black stripes much with broad, powerful hind paws which propel him to great speeds. He also has a long tail tipped with a tuft of brown fur.

His most noticeable feature, however, are the huge wings sprouting from his back which measure over double his body length, tip to tip.

Often he will wear armour consisting of gauntlets and a helmet, especially if he is riding to battle, which seldom occurs nowadays.

Skills and Abilities
Special Abilities: Nope.
Combat Style: Jupitus loves catching his foes unaware, terrifying them with a devilish shriek before grabbing them with his talons and lifting them to the clouds. He will then drop them, and let them plummet to their doom.

Background
History: Born within the forests of the old EarthWing territory, Juptius led an easygoing life within his eyrie, where he was fed and provided for by his parents. He was neither the runt, nor the dominant chick, but he fought when was needed and got his fair share of meals.

Years later, he fought alongside the EarthWings against the humans, and when the war was lost he travelled Pyrria with the EarthWings to find a new home. He is now a civilian of the Twilight Imperium.
RP Sample: Peregrinus/Tyrannos 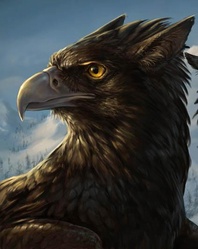 Re: Jupitus the Griffon

Re: Jupitus the Griffon

Also you need to add a link to your character list