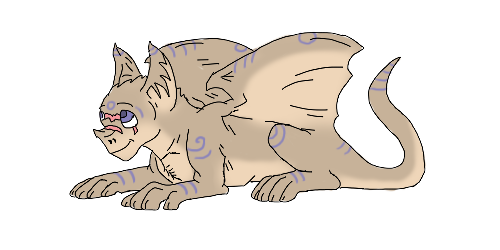 General Appearance
Height: 11 ft. (current height) / 25 ft. (adult size)
Scales: Pale cool brown. His scales are smooth and flexible like rubber.
Eyes: Big and curious. His irises are purple like lavender.
Appearance: Kaen is a very small and petite Dragon. His big, cute head and his big hands and feet make him look more friendly and innocent than he actually is.

Tribe Information and Status
Tribe: None, used to be a part of The Motria Cult.
Inheritance: The entire Motria Temple and it's prisoners.
Rank: Orphan.
Family: Kíli of Motria (Father), Maya Sun (Mother), Gozok of Motria (Uncle).
Mate: "I like chemical reactions, but not THAT kind of reactions!"
Hatchlings: None

Background
History: Kaen was born to a broodmother of the Motria Cult and a lone soldier. Despite being the only bastard in the nursery, Kaen was loved by both his nest-mates and the other broodmothers. Unfortunately, his mother happened to be the sister of Motria Cult's leader. Kaen's uncle didn't know about his half-blood nephew, but when he turned 7 years old and was supposed to be appointed to a Trademaster, Gozok of Motria began to question why the young lad had those strange, foreign markings. When Kaen reached the age of 8,5, his mother Maya died of some random disease. Everyone was in sorrow, except the young Dragon himself. When he turned 9, his uncle finally realized that Kaen's dad was not a member of the Motria Cult. Gozok tried to kill his nephew, but he escaped. After a month of chasing, Gozok returned to the Motria Temple, though he was not giving up the hunt. Kaen was free... for now...
RP Sample:

Suddenly, the foul liquid began the fizz. Large indigo bubbles popped from the wooden bowl. 'Of course... of course!!' The small Dragon began the grin. He began to write a calculation down zealously, while his grin extended into a mad laugh. 'Hahaha!! Of course! Who'd thought that Drake-butter would fume when it's mixed with dehydrated Nirnroot?!' He snorted contended. 'Probably nobody. All those Scalebutts around here are to ignorant to distinguish steam from smoke..' Kaen inhaled the purple fume and smiled. This... this was perfect. This was, like, the biggest breakthrough since his escape!

Hello Kaen! Welcome  to Dragons Roleplaying Forum! It's nice to have you!

Now, first of all, I'd like to let you know that there are seven distinct tribes on this site, the EarthWings, FireWings, NightWings, IceWings, SeaWings, SkyWings, and LightWings. For more information on the tribes, you can search here.

This first link will provide you with details about making your character app, as well as descriptions of the dragons from each tribe, and what inheritance is.

This will not only give you an overview of the tribes, but also a brief history of the site and its lore.

As for your personality, we ask that you go a bit more in depth with your descriptions, and have at least 5 full sentences.

After you've updated your app, go ahead and reply letting us know! If you have any questions, you can either visit the chat to get them clarified, or you can pm a mod or admin.