PEREGRINUS
https://www.rpgdragons.org/t4897-peregrinus-characters
Type of Character: Human - Wizard
Name: Peregrinus Voren
Alias: The Grey Sorcerer, The First Wizard, The Grey Scholar, Peregrine.
Age: 256 Human Years Old - life extended by his magic.
Gender: Male
Sexuality: Possibly asexual.
Personality: Peregrinus is a very wise old Wizard, who often finds himself lost deep in thought on a great variety of things: from what his next meal may be to the mysteries of the magic he practises. He is smart, courageous and most of all loving.The Grey Sorcerer holds a love for nature and all things beautiful, and will often wander deep within hidden forests and mountains in search for gleaming gems and lost creatures.

He respects all creatures - from a mere ant to a gargantuan EarthWing, and does his best to educate the Men of Pyrria on dragons, and how to prevent their cities from being destroyed.

Fears: Peregrinus fears darkness, a shadow of evil enveloping the world he lives in with nothing he can do to prevent it's onslaught of terror. He is afraid of loosing his power, for that would mean that he could no longer protect the innocent creatures of Pyrria.

Strengths: Peregrinus is a master of Human magic, so much so it is believed that he is the premier Wizard in the whole of Pyrria. Whether or not this is true or not, is yet to be discovered Nevertheless, he is able to summon all sorts of spells, ranging from small everyday powers to grand displays of might, which can be seldom used. Or perhaps he's a mad old man.

Weaknesses: Despite the magic sustaining his life, Peregrinus is still mortal and without his life extension spell, he would have died a long time ago. Therefore, his age is a weakness as it hinders his physical movement sometimes.

Height: Peregrinus stands at a modest 6'1, and is often slightly stooped.
Hair: He has long, grey hair which is slightly curled. His eyebrows are bushy and wild and his beard stretched down to his chest.
Eyes: Brown
Appearance: Peregrinus is a wizened old man, with a creased face which has seen many years of sunlight, and as such is graced by a gentle tan. His nose is long and hooked, crooked as if it has been broken many times over. Peregrinus' eyes are heavily hooded and beneath a bushy mess of whitish-grey hair as his eyebrows. His ears are positively huge and appear as radar dishes on the side of his face. His hair obscures most of them, however. It stretches out from his scalp to his back, unruly and unkempt and adding to an air of mystery to his stooped figure. His beard begins beneath his nose upon his upper lip and wraps around his face - up his chin, jaw and finally cheek before dripping down like melted wax towards his chest. Often, a pipe is positioned between his lips.

Peregrinus wears almost exclusively a grey travelling cloak which shrouds him in mystery. He leans upon a grand staff, which is the main source of his magical power and from the staff he can use spells and telekinesis. Within his sleeve is a magic wand, crafted by himself and half as powerful as his staff.

Therapevo / Healing - the caster heals minor injuries and ailments with a touch of its staff or finger.
Anavo / Pyrokinesis - small flames can be summoned, useful for candle ignition.

THE ELIXIR OF XANHA
On his nomadic ventures, Peregrinus discovered many secrets of Wizardry, the most prominent being an elixir that grants immortality. Unfortunately, all that was left was a small droplet, not enough to sustain him for eternity.

So, the wizard set about replicating the brew, and has so far only managed to make a potion which keeps him alive (should no physical injuries kill him) for one year. Should his brew be lost, ageing will once again resume, and he will die within a few years.

History: Peregrinus endured an entirely unremarkable childhood within the walls of a small town on the outskirts of EarthWing territory, where he was taught in a decent school by decent teachers. His parents had little money, however, and at the age of 15 Peregrinus had to take on a job and became a smith's apprentice in the local blacksmith's. It was lucky that the lad was a bright one, as his school career ended there and then as his new job quickly absorbed most of his time as he became a provider for his family alongside his parents.

One day, under unforeseen circumstances, Pere's uncle passed away in a freak boating accident and despite never before sharing his wealth with his struggling kin, Peregrinus was left a small libraries worth of books and scrolls. He had initially dismissed them, and a deep resent burned within his heart for months and he refused to even look at the dust-ridden covers of the texts.

Curiosity eventually took hold of him, and the young smith peeked a look at the title of several of the books and at once he felt a deep desire to gaze upon their pages and absorb their vast fountains of knowledge. For they were books of magic.

Casting his blossoming career aside, almost every hour he could sacrifice was poured into study of these manuals, and quickly he learnt how to unlock and nurture his magical potential, however limited it was.

In a year, he could summon small flames with a click of his fingers, and within twenty he had crafted himself a staff which he could channel his magical ability through in addition to a magic wand. The age of retirement soon came and went, and a reasonable amount of gold sat upon his name, and the elderly man was content with his life.

However, Peregrinus craved more, and began to become increasingly frustrated at the lack of natural power he possessed which prevented him from discovering the most extreme powers locked in the pages of the book. That was the motive, at 70 years of age, to leave his humble home and adventure out into the wild to discover the secrets of magic.

He knew that the key to longevity and by default power would be unlocked upon his travels, and he eventually discovered the Elixir of Xanha, which he replicated to extend his years and preserve his body for as long as he could continue manufacturing the brew. 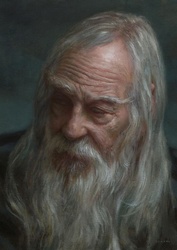 Question about using his magic to extend his life: He can't use this forever, can he? Because obviously he can't be immortal.

As for his spells, you'll need to be more specific. List all the spells you know, and what they do. There is such a wide range of possibilities for spells that that description would be too vague.
_______________________

You also need to add a link to your character list.

But right now, as is, this wizard is too powerful. Humans are terrible at magic. You can keep a couple of your Basic spells, like Therapevo and Diafotzio, but everything else you're going to have to get rid of.

Is there any way I could get around the humans being terrible at magic? Like his powers being gifted to him by a human God(dess) of Magic or Phantom?
_______________________
Tyrannos and Peregrinus

No, I'm afraid there isn't. There are no Human gods/goddesses and Phantom is no longer a Goddess.