Although the capitol of Amaranthine was built on the edge of a swamp, it was far from mushy, fungal and wet.. Rather the oppisit, dry and warm, which was likely due to the caves underneath keeping the heat from the days through to the night and the several braziers that lit up the streets on a daily basis..
Even now, in the early noon hours it wasn't too cold, yet it was somewhat clouded as usual, which gave off a darkened theme across the whole city and surrounding area of the dark forest and wetlands.

In the grand hall of the keep, a little ways from the throne room of the archon Tenebris, was arranged so that a circle was made of torches, the windows were covered by curtains of black velvet so that the room was only lit by the torches which highlighted the golden dragon engravings around the pillars, floor and walls.

By the far end of the room was sat a jet black drake with glowing yellow eyes, gazing down towards the entrance, guards and members of the inquisition was scattered throughout the hall, all awaiting possible recruits to enter.. Only a handful had gotten invitations as that was common with the Inquisition, yet rarely more than one or two would succeed and live to join for the secondary trial, the rest would either die or admit to their defeat in front of the Grand-Inquisitor himself; Nerokius, Lord-Commander of the Nightwing forces and second-in-command to the whole nightwing kingdom, only succeeded by Archon Tenebris, leader of all Nightwings.

Nerokius had sent out five letters to five individuals, three of which had already shown up, one still lived for the second trial while the remaining two had perished under the extreme first trial and now only two remained, Malek the Hydra and another black drake.

His gaze loomed over the entrance to the great hall, awaiting and impatiant, his chest and right shoulder, covered by a dark metal armour, elegant in looks, yet very effective in combat.
Along his back was a black and crimson cape, strapped around his neck and fastened to the plate armour with steel clips, engraved with gold runes.

Two guards was posted right outside the great halls, halting anyone from entering unless they could conjour their invitation from the Grand-Inquisitor.
_______________________
"Death is inevitable.. No matter who you are.." 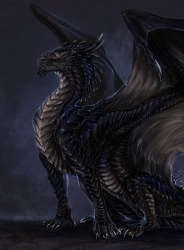 Today was the second trial, the first being passed not so easily but shown little effect towards the three minds of the hydra Malek. Earlier she stopped bt and paid a smithy, who was going out of business to sharpen her nails, the sum of the cost was much less than what she gave the poor drake, but as he closed up she wished him farewell. He was quite cute, Gold, the middle head thought as Red the right head seethed with anger.
"Should have made them sharper," Red grumbled, looking down at the sharp claws, "Then we could slit some serious throats."
Gold agreed mentally, however she thought they would be sharp enough. As they strolled through the district and on the way to the grand hall. Despite being located in practically a swamp Gold took everything in mental notes, she walked down the street everyday for her own amusement, she knows all of the names of the NightWings that lived here, she knew what they were gonna do and when, and either left and right head shared this information but kept a watchful eye out for anything out of the ordinary.

Malek, Gold more precisely readied for any question, any test, Blue looked around with tired eyes whilst Red still glared at the sharpened nails. They entered the great hall after the guards let her pas due to the invitation and stopped at the edge behind tge entrance.
'Do I really want to do this?' Malek thought, 'Only reason I succeeded last time was because of my stealth and acid, what if the next test is my last?' Without thinking Malek simply strode foward through the great hall, keeping her thoughts of death and disappointment at bay as she approached the grand inquisitor. She didn't bow, but rather, Gold in an innocent voice asked the black dragon, "Hi, is this where the recruits are supposed to meet?"

The yellow eyes of Nerokius fell down on the smaller creature with an eerie yellow glow that seemed to come from within. His neck that was craned up high, slowly lowered to somewhat match Malek's height and with a squint of his eyes he opened his maw to speak to her "It is, young Hydra.. This is the first trial of the Inquisition.. Any trial prior to today has been annulled as the Inquisition is a faction of it's own.." his voice was deep and rumbling and the tone was lowered, rather than his usual booming tone.

Nerokius gestured to the circle of torches in the middle of the hall, his palm facing upwards before he allowed it to drop once more onto the floor before he proceeded towards the side of the great hall to sit down near the circle as everyone else seemed to move closer aswell.. All but two slim black dragons, who moved to either side of the circle, one by the entrance side and the other on the opposite side. Both clad in dark clothing and with jewelry that indicated their position within the sorcerers and mages of the imperium.

The doors were closed and the two mages looked to Nerokius for confirmation and with a single nod of his head, they started their incartations and waved their hands about. Nerokius looked to Malek who should be inside the circle by now "The first trial will consist of you, trying to survive whatever comes at you.. The mages will summon forth aberrations that you will fight.. This will continue until you have defeated everything." his deep voice stopped for a moment as he allowed her to absorb the information before his maw opened once more "Do you have any questions, as to your task at hand?" his yellow eyes squinted once more in silent scrutiny, inspecting her movements as his tail fell silently to the ground behind him.
_______________________
"Death is inevitable.. No matter who you are.."

In the circle already was Malek, both excited to start and scared as well. This was the first test she needed to pass, ahd ad the question for questions rose up Malek shook her head. She understood the goal of the trial and said, "Im ready for the test."
Malek didn't know what creatures ti expect nor had she the time to do her own investigations on what could be ahead. Nope she wanted to play it clean, no cheating, no questioning others, she wanted everything to be a surprise. What comes can come, Malek was not going to complain n9r barter her way through this which seemed like an ideal that could fall apart immediately, these "apparitions" would be interesting enough for her not to do either, namely because they would be frowned upon. Thw creatures could be dragons... Or giants or giant spiders. Cooked spider sounded good about now. No, she needed to concentrate, she had her heads, claws and even her acid ready. The acid would be useful due to there being no water around.