Hi! I'm Zeditha (yes, my name is the same as that of my main character; feel free to call me Zedi if you want to tell us apart!) and I'm making (or re-making?) my first character on this site.
I joined in 2014, according to my profile, but recently received an email about this site, and decided to check it out.

Please do give constructive criticism, help, advice, anything! I try my best to be positive and accept improvements on my work. 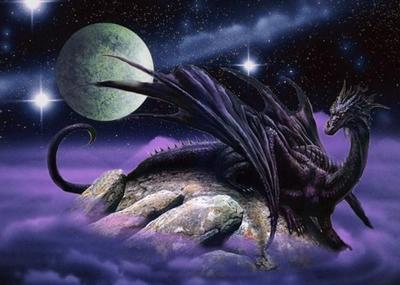 Type of Character: Dragon
Personal Info
Name: Zeditha
Alias: Bloodspot, Zedi or Zed to her friends (if she makes any)
Gender: Female
Sexuality: Demisexual -For those who do not know, this means she is only sexually attracted to those with whom she has formed an emotional bond.-
Personality: (What is your dragon's personality? Please make it detailed.)
Fears: Small cages/being trapped -I will think of more things-
Strengths: (What is your dragon good at? Both physical and mental strengths must be included)
Weaknesses: (What is your dragon's weaknesses? All dragons should have one, if not more.)

General Appearance
Height: About 10'.
Scales: Midnight purple -see picture- with subtle streaks of both blue and true black. She has a smallish patch of deep red scales on her left hip.
Eyes: A dim but pure amber, Zeditha's eyes are catlike and ever-watchful. She rarely blinks, a trait which often seems to be seen as creepy.
Appearance: (Your character's general appearance. Weapons and other accessories must be included)

Skills and Abilities
Special Abilities: -will think of specifics-
Combat Style: Stealth, attacking from the shadows. If faced with a direct confrontation, she will likely flee and hide.

Background
History: Zeditha was stolen as an egg, from a nest closer to Kakos than it perhaps should have been. Her mother, a Nightwing citizen, ran away from her tribe to be with a Lightwing/Skywing crossbreed, who was himself a loner. They made their home in the Rotten Forest, but it was found by the humans who lived too close by; they crept in under the cover of darkness, killing Zeditha's father and stealing the clutch of eggs. Zeditha's mother tried to fend them off, but barely escaped with her life. -She later rejoined the Nightwings, I may bring her in as a secondary character.-
Zeditha's egg was quickly sold, like the rest of her brood; when she hatched, she found herself in a tiny cage in near-darkness, just dim enough that she could barely see. She was fed infrequently. She was only subjected to this torture for a few weeks, though, before she was sold yet again, to a master who trained her to be a deadly assassin. With quick wings, near-black scales and her deadly claws, she killed many humans for her master, who would reward her with treats, such as time hunting the wildlife in the ravaged woodland. She cared for her master, and protected him from countless risky situations, lurking with watchful amber eyes in the shadows.
It wasn't many years, though, until she became too big to be called a hatchling; by human standards, she was towering. Her master retired from the assassin business a wealthy man, and they moved to a different city - but before they could reach their destination, a monster attacked, drawn to the easy prey of a lone human and a small dragon. Zeditha managed to kill the dreadful thing, but her master was badly injured. With no knowledge of healing, she was forced to watch helplessly as her master died. Since then, she has roamed wherever the mood takes her, wanting only one thing: to kill all monsters.
RP Sample: (Provide a RP sample of how you would roleplay. Optional)

This is a WIP, but I'd still love any suggestions or help anyone can offer!
Specifically, I'd like to have some idea of what a suitable Nightwing ability would be, as I don't have many ideas.
If any aspect of the character would be against the rules, do please let me know and I'll rehaul as much as is necessary. 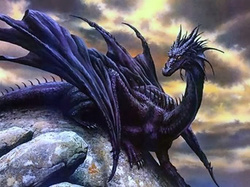 Hello. Welcome back to the site! Since this is a WIP right now, there's not a whole lot of advice I can give. I can point out that you forgot your dragon's age. If you'd like to go over your character and ask questions about what would and wouldn't be allowed, hop into the chatbox so we can talk about it.