The Darkness is Back(Open to all)

The Darkness is Back(Open to all)

Darkflame yawned, and narrowed her red eyes, the fog was penetrating on her eyes, she flicked her tail and keep walking forward, Darkflame didn't know where to go, but where her feet traveled, she won't complain. The black dragoness escanned the dead area, if there was some prey by there, but she just found a eskeleton of a dead animal.

Darkflame frowned and continued her path, her head down and her gaze dropped, the NightWing Tribe needed enough food, but for her sadness, she couldn't found any. With a large sigh, Darkflame looked back, making sure nobody was following her 'I'am in rogue lands, no one would be here..' She though, the dark NightWing after this, saw the dark dead area, then she found a little spot where to sleep some.

She lay down and curled, then closed her eyes, not paying attention if someone was watching her or something by the kind, but Darkflame knew she had to go back to the NightWing's territory, as soon as she finsihed her search for food, because, she wouldn't get out until she founded enough food for the Tribe.
_______________________
''No one's is afraid of the darkness, they're afraid of the creatures that lurks inside''

Saqr glanced warily around her. The dead land certainly unnerved her. But she should be fine, right? This was rogue land, but from the looks of it, hardly any rogue would be wandering here. Which was good for her at least, it took a lot of concentration to darken her scales, and she hadn't quite gotten the hang of it yet. So for now, she deemed it safe enough to wander with the brightness of her white scales showing. Of course, she was a rather long ways away from her usual home. Plus, she highly doubted she would find anything to eat here, either.

Still, she traveled on, light on her feet, hoping to find something to jostle her memory and find a way out of this unsettling area. Eventually, she came to a large rock. It was a bit scaled, and spiked, which was odd, but she didn't think much of it. Nimbly, she leapt to climb on top of the "rock" to get a look around. There was a skeleton, but not much else. It all looked the same to the young rogue. She huffed, sitting down, wings twitching in slight agitation. She hated the feeling of being lost.

Feeling a big heavy over her, Darkflame opened her red eyes, seeing the one who was sitting over her "Hey! Get off, I'm not a rock!" Darkflame growled, angrily at the rogue.

"Eh-eek!" Saqr yelped, tumbling and rolling right off the dragon. A little bit of dark dust flew up around the young dragon, who quickly scrambled off her back, pressing her soft belly to the dirt. Just to be safe, she scuttled backwards, wings flaring out to the sides slightly as if preparing to flee. Her green eyes glanced up warily into the contrasting, glowing, very angry eyes of the other and older Nightwing.

Her tail swished, and she concentrated on making her scales a little darker, so maybe if she did need to flee, she could blend in better and maybe, by chance, loose the other dragon. "I'm sorry u-uh miss." she gulped, pressing herself even lower to the ground. Her muscles tensed, and she raised onto her toes, and almost in a cat like manner, the small spikes she had along her spine went rigid and stood on end. Sheesh, what had she gotten herself into now?
_______________________
Saqr's Bio

All of a sudden, a spout of fire erupted like an unholy geyser and Tyrannos' flames licked at the air like serpent's tongues probing for a scent. The firedrake's chest glowed like magma as he kindled an inferno within his throat, eager to rain it upon whomever had awoken him from his slumber.

His artificial light had illuminated his grand height to the two puny drakes beneath him, they both appeared to be around 15 feet in height and he towered above them, arching his serpentine neck, reaching over 85 feet into the darkness.

He was propped up by three demonic fingers attached to his wing, giving him the stature of a wyvern. A great rumbling came from his chest as smoke billowed from his widened nostrils, until finally his voice cracked the air like a whip. It carried across the land like demonic thunder, sending creatures fleeing as if he had unleashed the wrath of the Gods upon the land. 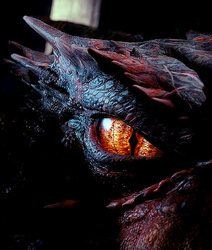 Darkflame, snorted at the young dragon "I accept your apologize, but don't sit on a Tribe dragon again!" She then glanced at the dark figure over her.

Saqr gulped, shrinking back at the harsh response from the Nightwing. A little harsh, but, then again, Saqr hadn't been paying much attention anyways. The sudden looming shadow, and booming voice behind her however, sent the young dragon sprawling in a fright, her darkened scales flashing back to white. With a scream, her claws scrabbled against the dead ground, attempting to rush foreword, only managing to trip onto her back. Her eyes blinked open slowly, gazing up at the massive form above her, gazing into their eyes. "Hi, uh hi, wow... uh, you're, you're big" Saqr chirped intelligntly, before mentally screaming at herself, convinced she probably signed off her own death wish.
_______________________
Saqr's Bio