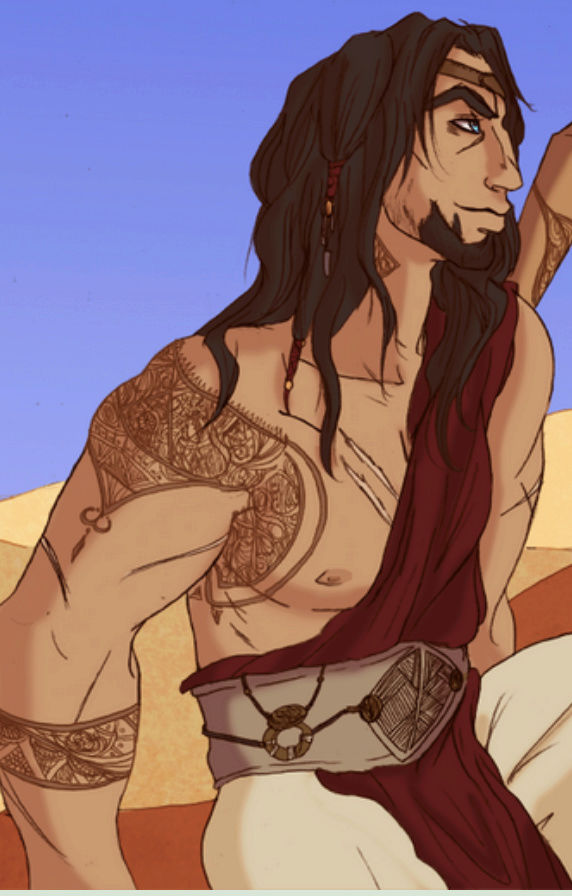 Personality:
Ater is very close to his tribe and deeply cares for his family. It has been hard living in the slums of Ammos, and he spends much of his time in the wilderness of the desert foraging for his family. He is generous and well loved, responsible and honest. He angers easily and will do anything for love, most especially for gorgeous women, though he is rarely lustful and would be more likely to get his heart broken then break one. He is generally aloof except when with family, and during the day prefers the solitude of nature. He is something of a soothsayer in Ammos. When he wanders, as the visions sometimes call him to, he always pines for home and family.


Strengths: Physically strong, nimble and capable. A desert guerilla fighter, he is in tune with nature and very versatile at interacting with any landscape he is in. He is skilled, too, at building or finding shelter in any place and can track and trap animals with skill. His weapon of choice is a sword and shield, plus a number of throwing knives given to him by his grandmother, a matron of his clan.

Sometimes he has visions, the beginnings of magic power in him; it started when he hit his head in the desert and woke up after 3 days nearly dead. They’re simple, usually just a place, and a feeling he must travel there. To what end, he is usually uncertain.


Weaknesses: His family. Being in wet or cold climates. Bad at crafting clothing. His visions will knock him out when he has them; the longer or more important the vision, the longer he will be knocked out. It could be a couple seconds (like a petit mal seizer) a full day of unconsciousness (the longest ever time he was knocked out was the first time, which was for 3 days.)

Home: From Ammos, but is truly more of a wanderer

Skills Good at tracking, navigating any landscape and building shelter. Basic trap-setting skills for hunting. Excellent at fighting with a sword and throwing knives.

Equipment: A machete for use on desert and forest plants; a set of 4 throwing knives crafted by his grandmother; An old sword that belonged to his grandfather and father (he will make a new one himself before long), a sturdy shield passed down by his clan. A kit with basic supplies to make traps.

Combat Style: Ater is very proficient at sword fighting and knife throwing. He is also a more then decent boxer, and unafraid to fight without his weapon. He was in many scraps as a kid, and has used his throwing knives and basic trap-making skills to hunt.

History: Ater grew up under the shadow of war, in a harsh world in the city of Ammos. His clan was peaceful, not full of the hate of war, but what needed to be done was done. Luckily, they were not asked to fight directly, just survive a difficult period. Peace came when he was still young, but he grew up very responsible for his brothers and sisters, and for his family. His father and grandfather died during the war, so he was raised mostly by his mother and 2 older sisters.

He had always been fond of the desert, drawn to it, called by it, and could be found exploring it with friends from an early age. He also spent much time out there alone as well. At age 16 he travelled deep into the desert to explore and found himself beside a deep cave up on a mesa cool and moist on the inside. Something caused him to slip and fall; as he fell, before he hit the ground, a vision of something vast and endless came to him. He woke up on the desert floor 3 days later, and it was considered a miracle he survived. It felt as though the vision were telling him something; since that time, he occasionally has visions which knock him out and seem to give him directions as to where to go next. He calls them “marching orders,” and where they direct him, he goes.

Saltshrub, barley, fireflask…Wild Rosemary…Ater counted the clippings in his pack, once again trying to remember the list of ingredients his sister, Syrra, had begged him for. He was missing two, and as the sun grew hotter he was less eager to stay outside of the camp; he had been looking forward to a cold drink for some hours now, and the other men had run home ages ago. It was the damned soft spot he had for his youngest sister…

He sighed and strapped the leather to his back once again, leaping lightly over the rocky crags and stretching his legs toward home. Maybe he’d see what he was looking for along the way and it would jog his memory. Either way, he might as well be jogging in the right direction.

Hey Arius, for future reference, you have to make a new account when you make a new character.

So you don't have to do this app all over, I'll treat this as if you did make a new account but were unable to post your app (sometimes that happens). So this is approved, but if you could make an account for this character, that'd be great.

O cool didn't know that. Will do - Thanks Baldirak!

Perfectly fine. And you're welcome.