Embers in the Fire

Embers in the Fire Type of Character: Human
Name: Kait Kuluwait
Alias: Ember
Age: 28
Gender: Female
Sexuality: Bisexual
Personality: Ember is very independant. The only thing she wants from others is supplies, that of which she trades for. Apart from that, she thinks she can take on everything by herself, which she does rather well. Ember also hates surprises, and doesn't take lightly to when they happen. She knows her weaknesses, so when she meets a dragon that is much too powerful, she won't go head on and try to engage it. Even though she doesn't show it, she's rather scared of dragons, the larger the more scarier. Everytime she faces a dragon she faces the fear, but she knows that they're a force to be reckoned with. Even with this, she still doesn't like accepting help. Ember also isn't that social, as since she left the village she hasn't talked with most people. She can also take things the wrong way because of this, and is oblivious to other things.
Fears: ~Looking Death in the eye
~Dragons, especially big ones
Strengths: ~Nimble
~Determined
~Fierce
Weaknesses: ~Small size against these large beasts
~Stubborn
~Rejects help from others

General Appearance
Height: 4'9"
Hair: Dark brown
Eyes: Silver
Appearance: Small and petite, Ember is rather fast and surprisingly strong for her looks. She has long dark brown hair and silver eyes with pink lips. She keeps Three stripes on her face, two thicker ones under her eyes and a smaller one under the stripe on the right. She wears a hood at almost all times, a quiver strapped across her back accompanied by her bow at most times. She has a necklace of dragon teeth from the few dragons she's killed. Ember also has a silver chain that goes around the top of her head. Around the waist of her pants is where she keeps the smaller yet also important stuff, like her daggers, chain, bag of stones, and other things she might find like twigs for a fire.

Skills and Abilities
Skills Due to her time by herself, she is proficient at making fire and doing a lot of stuff for herself. To eat she mostly hunts small things like rabbits and squirrels. She barely tried with anything bigger for her to eat, but sometimes save some jerky to use with dragons. While she calls herself a dragon hunter, she has never taken on anything super dangerous, only young ones with weak skin.
Equipment: Bow and twelve arrows, two daggers, a hook with chain able to tie up a dragon.
Ember also has a few stones she found in a cave she explored. They look like embers in a fire, but produce no heat, only light. To turn them off, she has to put her hand around them, and to turn them on she rubs them between her hands. She has twenty of these pebble-sized stones and keeps most in a bag, but has two she keeps tied in her hair.
Combat Style: Uses her small and nimble size to her advantage, shooting arrows to distract, or using them as her main form of attack if they have weak skin. If not, she'll attempt to tie them up with her hook. If they're too big, she's smart enough to not attempt to face them.

Background
History: Ember grew up to a nice family consisting of her mother and father. They lived in a small village where they taught her what they thought she needed to know. When she was 16, the village suffered from a dragon attack. The dragon killed her father, and she sweared she was going to kill every dragon she saw. Ember left the village and went out on her own, trading with other towns and gathering things on her own. She was so proud when she killed her first dragon, but she doesn't realize just how many are out there.
RP Sample: Lazy 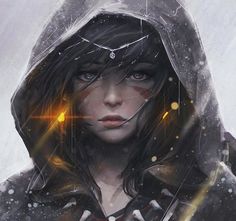 Re: Embers in the Fire