Type of Character: Dragon
Species: Leviathan
Name:Sudokiko
Alias: Mizutsune ("Mizu" means water, "tsune" is a shortened "kitsune", which means fox, altogether, Waterfox.
Age: 250
Gender: Female
Sexuality: Homosexual
Personality: Sudokiko is shown to be a calm and collected leviathan that spends a lot of her time relaxing. also, when some dragons may come around to fight others, Sudokiko comes across as the most peaceful of the lot.  some humans believe that she is a elegant spirit of the water who would rather spend her time sleeping than fighting over territory. she also shows to be kinda lazy rather than doing anything.
Fears: humans, being alone, other monsters.
Strengths:very flexible, is very fast, and can run up to 35 MPH. she also have good reflexes, which allows her to jump and do a dance-like turn quickly.
Weaknesses: Fire, lighting, and also being tricked herself (this rarely happens)


Skills and Abilities
Special Abilities: despite her way of moving, she does have some powers that is a little bit strange. pretend she is fighting humans (this is a example), and the humans are trying to slay her. she has 2 powers. first power:

Bubble magic: Bubble magic is a slippery and sticky substance,which can make intruders fall. Yes the bubbles can pop, but it takes it 5 seconds for them to pop one by one depending on what time did she shoot them. sometimes the bubbles get so big that it can trap attackers, impossible to escape unless the bubble pops. it takes her 5 seconds to fire, 1 min to reload. also, she is immune to this substance. how far can the bubbles go? about a mile.

illusions: they don't call her the goddess of trickery for no reason! thanks to her godly powers (and her complicated genes)she can make her scales look like something else, like a rock, a statue of herself (people and dragons used to believe that she was dead. that's why she try to hide from everyone), or anything else. even dragons and people that she know! but she rarely changes to the living.

Combat Style: First of all, she barely fights, but still. when shes fight,she spends most of the time avoiding the attacks rather than fighting back. so when the attack gets tired, she then starts to attack. she attacks with dance-like spins and twirls, making the attacker a little confused on what to do next. 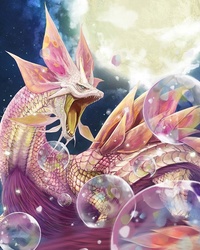 I see that this is a WIP, but I wanted to point out that Leviathan is not one of the Lesser Species we have here. This is the list of available Lesser Species https://www.rpgdragons.org/t4280-lesser-species?highlight=Lesser

thanks for the idea!

You need to use the Dragon Character template for this. Also, since she is not a goddess, you shouldn't​ say she has godly powers, and Goddess of Trickery should go under aliases. Since her eyes change color to reflect her mood and she can change the color of her scales in order to camouflage, she should have LightWing heritage--remember to give the exact percentage of each species she is made up of. Maybe you should rename your second ability since she doesn't actually use illusions.

Finally, you said your bubbles can grow big enough to trap an attacker and is impossible to escape unless it pops. Does this mean that a bubble that traps someone doesn't pop after 5 seconds and can only be popped from the outside? If so you need to change it so it can be popped from the inside and state whether doing so would be easy or take a few hits. Exactly how big can the bubbles get? Could they trap the biggest EarthWings?