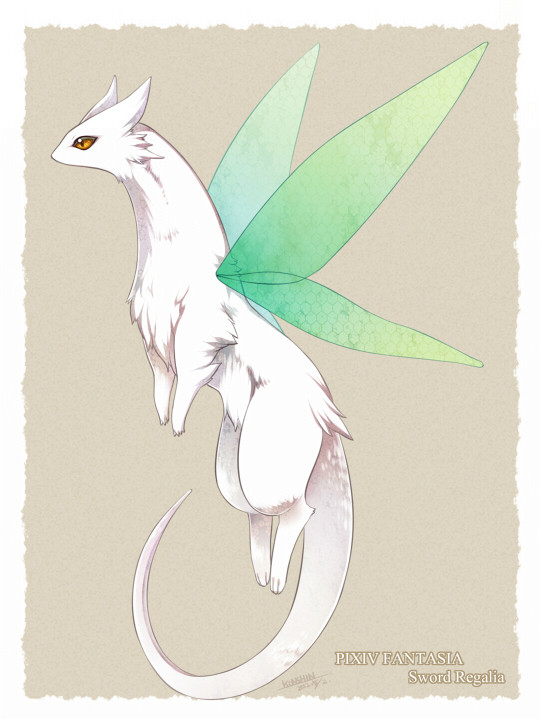 Personal Info
Name: Pirika
Alias: Faerie Dragon
Age: 9
Gender: Female
Sexuality: Heterosexual
Personality: There isn't much to say about Pirika. Keen, silent and much like a cat. Purring when pleased and letting out a hiss when displeased. She is playful to those she trusts which as it stands now is only Aela. She fears bigger predatory animals, cowering of dragons but defends herself against something likes wolves (in somewhat a panicked state). She clings to Aela a lot seldom wondering off, in a way it reflects how Aela feels inside, never wanting to be alone.

Fears: Pirika is afraid of bigger predatory animals. Primarily dragons so to speak.

Scales: Soft Fur
Eyes: Beaded Yellow
Appearance: Pirika, appears to look like a sort of white ferret, a pointed mouth, pointed and raised ears, a long neck but pointed tail. Its fur is extremely soft to the touch, water proof and resilient against the cold. On its back are two set of light green wings patterned softly with hexagons much like a beehive. Both hind and front paws have claws. The hind resemble more dog claws while the front are sharper, both however are retractable. Small needle like teeth. A small pink tongue.

Skills and Abilities
Strengths: Pirika as dragon kin holds some magical power as limited as they may appear, however she is too young to do such.
Special Abilities: Pirika's saliva has healing capabilities, stopping bleeding and helping wounds to close. However it's not a miracle worker and mortal wounds cannot be helped. Chewing medical herbs causes her saliva to become more effective, working faster and better. Such as poisons and such.

Pirika has night vision being able to see even in the darkest of places as long as there is even a spec of light. In addition Pirika has a keen sense of smell.

Pirika seems to have some form of command over the powers of nature. Causing a seed to grow faster, or even a flower to bear fruit. Small manipulations of plants that are still alive is within her ability.

Pirika can has the ability to fly. Not as high as other dragons but at heights of birds reaching speeds of up to 60km/h.
Weaknesses: Small in size, not a combat animal. Cannot talk like humans. Understands dragonic languages.
Combat Style: Pirika isn't a combat companion. However if anything it will be like a cat or ferret. Pouncing and scratching with the occasional biting.

Background
History: Pirika is a Faerie Dragon. Though they cannot officially be tagged as dragons their names come from their appearance mostly. They in a way look like small dragons with fairy wings. Magical by nature they say Faerie dragons are attendants to the Gods of Earth and Light. Pirika was hatched from an egg without a mother. How this came to be can only be speculated. Perhaps in the many shifts in territory of dragonic wars, Pirika had been left behind during incubation. This weak hatchling was found by Aela, taken in as companion in the cold climates of Kyrios. Aela herself is not entirely sure what her companion is nor has anyone seen such a rare creature. The cold climates caused Pirika's fur to grow a soft yet thick white. Pirika sustains on sweet fruits and small insects.
RP Sample:

Approval rescinded. Reason: Error on part of staff who approved it (myself). The height of your character is not within the allowed parameters.

Please adjust your character's height to one suitable for a Dragon of her age.

Special Admin re-approval for NPC purposes and without the ability to reproduce.
_______________________
I'm a super cute and cuddly little Dragon Cat who loves spaz fish, dragon nip, humans, and being called cute while I'm being scary.