Proteus is almost like what any dragon would expect a slightly older recently matured dragon would act, without the ego or stubbornness and not the kindest dragon in the world. He is normally calm and collected, but cold at times without fear of consequence on what he says to whom. Because of this, what he says can be perceived as offense and insulting, or a dark humour of sorts. He is extremely mature, knowing to take responsibility for his own failures, but a bit reluctantly sharing his successes with the rest of who he works for. Although he has successfully led a number of different school of young dragons during his youth, Proteus prefers to be alone, believing that many will just get in his way. He holds a strong sense of duty and loyalty to both his friends and superiors, as long as they do not get on his nerves. However, if someone manages to open up to him, he may be willing to discard his apathy and lend a helping claw whenever they need so.

There are several instances where he has broken out of his personality for a good reason. He has also shown to be rather cunning and manipulative, though this is mostly geared towards his work or against someone who ticked him off. Proteus can convincingly change to several personalities, hold different beliefs and slightly alter his voice, but this is extremely rare and he prefers not to humiliate himself with it. He is not the best at doing this though, as he cannot pretend to be a female or any dragon at extremes of age, and neither can he mimic extreme personalities like joyfulness.

Proteus fears having exhausted his use, as he has not decided what he would be if he is no longer a tracker.

Proteus is somewhat of a balanced fighter, though his sleek figure is built more towards speed, fast reflexes and ability to make sharp turns both on air and ground. His style, compared to most dragons, is considered unorthodox. An example of this is when making a sharp turn around the corner, he slams the claw nearest to the corner and pivots his entire body in their air, around and landing before taking off again. This can put a lot of stress on his muscles for the gain of not losing any speed while making a hard turn. However, his intensive training among the poor districts of the Nightwing Society as he runs from authorities or chases down his targets has trained much of his muscles, and he is capable of performing such a manoeuvre over a huge number of times. This also boosts his stamina, allowing him to run or fly a great distance without tiring out. His top speed is 80mph, which he can achieve after running in a straight line for ~10 seconds (or 0.5 of a post). Additionally, with enough concentration on what's on the ground, Proteus can muffle most of his steps while he is running and avoid making a lot of noise that may disturb his target. Such concentration will need him to slow down a bit, so it is not useful if he is on pursuit or escaping. His claws are honed, and can cleave most dragon's flesh down to the bone, but cannot cut bone itself. He can also deflect any projectiles with them, provided they aren't going at him at speeds he cannot react against.


His speed and smarts make up for what he lacks in actual muscles. In comparison with average dragons, his brute strength is subpar and making any heavy attacks are not worth it. Although he can deliver enough force to bruise, cripple and even shatter bones of his targets, he cannot really perform anything bigger, such as knocking a dragon around his size a number of distance away from him, or performing an uppercut that sends them flying.
Mental

Living within the poor districts of the Nightwings grant Proteus streetsmarts. Within a few seconds, he can memorise the map or blueprint of any city, even the most subtle of shortcuts, and immediately come up with the quickest and stealthiest routes. As part of being a tracker, he has enhanced eyesight and hearing, as well as strong awareness and perception of his surroundings. This makes it easy for him to track his target while making it difficult for those spying on him to hide, requiring that they have to be extra careful and not make even a few mistakes. Proteus, however, is not all about being a combat-tracker, and sometimes his methods could be a little more cunning. He can honey his words to a stranger, bribing them to be an informant, manipulate them or feign innocence. He has also mastered the basics of anatomy, alchemy and toxic flora, and sometimes apply them to his work, such as attacking vital areas or poisoning his target's drink, but he is still willing to learn more.

Aside from all of this, and some general knowledge, Proteus does not have a lot more else going for him. He is not a genius like many may think he is, and more often than not, he can make a number of mistakes in his predictions. Sometimes he can act on impulse, making him rush into traps that can lead to his downfall, but this is a matter of whether it was obvious to him or not, as well as his current state of emotion.

Proteus does not possess any ranged abilities himself and neither does he have any that can protect him from such. He can still dodge them however.

Especially if compromised, Proteus does not have anything on himself to defend against a group of enemies if he is surrounded.

In a fair fight against a very decent opponent, Proteus is guaranteed to lose due to his poor muscle strength. However, this does not mean he cannot exploit weaknesses.

General Appearance
Height: 36ft
Scales: Black, rounded
Eyes: Red
Appearance: Generally a black western dragon with some spinous protrusions along his back, tail and neck. They are more concentrated at his head. On him, he carries a pouch full of toxic vials, for the purpose of drenching his claws in them. What he carries on him varies, but he wont carry more than 10. They are either neurotoxins, myotoxins or haemotoxins or a variety of poisons. (Their effects will be listed when Proteus uses them.) None of them have instantaneous effects, taking up to 2 posts to take effect (duration drops to 1 post if the affected target is moving a lot). Against humans, they are lethal, but dragons have stronger resistance. Against the latter, his most powerful toxins wont be any more lethal than non-lethal symptoms (e.g. fatigue, numbness, temporary paralysis, nerve block, magic channel block or severe stinging pain of the affected area) for 3 posts. Additionally, no toxin is going to produce more than 2 symptoms.

Whenever Proteus's shadow passes by a larger one that engulfs his form, his form will shift into a state between reality and mist. This allows him to go a bit faster and completely diminishes any noise he makes as he moves. However, he can still be hurt by any attack. Once he leaves the shadow, his form solidifies again and shoots him forward at blurring speeds in a straight line (80ft at 160ft/second), leaving a trail of harmless shadowy mist behind him. He can perform this once every 2 post. Proteus can also choose to sprint once for 3 consecutive posts, but this will exhaust his legs severely at the 3rd dash (like he had run a marathon) and he will not be able to sprint again for 5 posts. Per topic (or per day), he can use this up to 20 times.

Proteus fights equally well both on air and on the ground, but taken altogether, he will not win in a fair fight against a strong opponent. He would do all he can to scavenge what little advantage he can get, using both the environment and critical parts of the body to use benefit to try and turn the fight around. Most of Proteus' strength lies on being unseen, and striking his opponent when and where they least expect, and as quickly as possible before they can retaliate. 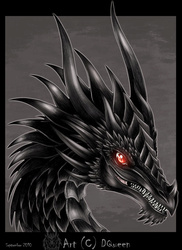 There were some things I wished to cover:

1. If you can please list your ailments/potions and poisons you use and their affects as well. As much a list it could be, this helps keeps track of what potions your character will use. For example: if you have a poison that slows foes for several seconds, please list all of them on here. It wouldn't be fair if you were going against an icewing and you somehow had a poison that affects dramatically on the spot. Not saying you'd do that, but there have been people who have done so. Call it paranoia.

2. If you do not mind could you please say how fast your character goes? Being pretty fast is great and all, but we need a basic ideal of how fast he can travil vie miles-per-hour.

3. Also, for your mist form, can we have a limit on the uses? I accept with whats there so far but there must be some energy limit or it needs to recharge. With how it functions I say you can use it 10-20 times a day, but after those times that particular ability must recharge for a day or so.

This is what I have so far, once your done lemme know what you got dude. Also welcome to the forum, ain't really see you here before.
_______________________
Bassasail, SeaWing Guardian
Attor, Starlight Sovereign
Gemna, The Last IceWing Scholar
Ragnarok, EarthWing Adviser
Abbadon, Hildrhilts Hatchling
Incus, Demigod of Fire
Malek, EarthWing Scout
____________